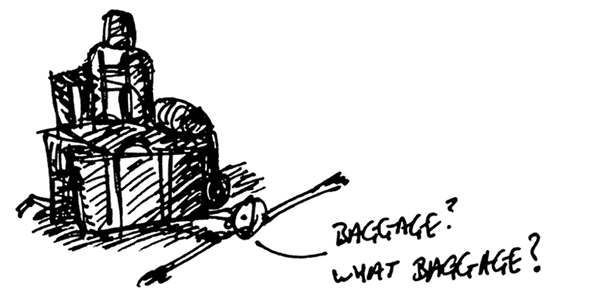 Anyone with a background in technology integration will, of course, be familiar with the diffusion of innovation curve. This is a method to explain the way that different groups of people will react to new technologies. It’s useful, but tends to be used in a very two-dimensional way — as if people will always react in the same way to something new placed in front of them.

In particular, I think using the diffusion of innovation curve in a simplistic way can leave out that the adoption and use of technologies has an affect on the way we see ourselves, on our agency, and (ultimately) our identity.

So, in this post, I want to challenge the assumption that those resisting the adoption of a particular technology are neo-Luddites. I’m basing this on my experience in schools, universities, and now as an independent consultant working with all kinds of organisations. I see a much more nuanced picture than is often put forward. Assuming people should “get with the program” can, after all, be a little techno-deterministic.

The lens I want to use here is one prompted by a sketch Bryan Mathers shared with me recently and which can be seen at the top of this post. It reminded me that everyone is bringing “baggage” with them when interacting with technologies. I want to consider three types of “baggage”: the toolsets, skillsets, and mindsets that we bring to different situations, some of which must be jettisoned when adopting — or rejecting — new technologies. In particular, I think that while we focus on digital skillsets for those subordinate or more junior than ourselves, we sometimes lack the introspection to consider ourselves in need of such development.

Marshall McLuhan is famously quoted as saying, “we shape our tools and afterwards our tools shape us.” By this he meant that there is a two-way relationship between human and invented things. We’re all acquainted with the phrase, “if all you’ve got is a hammer, then everything looks like a nail.” That’s a perfect example of a technology, albeit not a digital one, affecting how we see the world.

Many of us are acquainted with people for whom the answer to every technology-related question seems to be a Google, a Microsoft, or an Apple tool. I would suggest that these people have as much of a ‘toolset’ problem as the ‘laggard’ on the diffusion of innovation curve. I’d contend that it’s as dangerous and damaging to have baggage that says one vendor’s products are always the best solution as it is to say that no technological solution is best.

Time and time again, I come back to a Clay Shirky quotation from an interview he did a few years ago for The Setup. In it, Shirky advocates jettisoning perfectly sound and valid workflows in favour of awkward new ones — just so you move out of your comfort zone. This is advice as valid for the Google Certified Teacher as it is for the neo-luddite they’re attempting to enlighten. As Audrey Watters reminded us recently with her piece on the ideology of the blockchain, technologies are not neutral; they have values, worldviews, and assumptions hard-coded into them.

These days, when most educators see or hear the word “mindset,” they think of the work of Carol Dweck. While I’ve attempted, ever since seeing her keynote the Scottish Learning Festival in 2009, to bring up my children with a growth mindset, I think there’s more to the simple fixed/growth mindset binary.

The Oxford English Dictionary defines a “mindset” as “the established set of attitudes held by someone.” If we consider attitudes people have toward technologies, then these can be many and varied, not just a belief in whether one’s intelligence is fixed. These “established attitudes” can take the form of almost any kind of belief. For example, what constitutes a just and fair society, or what is involved in human flourishing. As I’ve been reminded recently, it even includes extrapolating from where one stands on the introvert-extrovert spectrum.

I’m currently reading Cal Newport’s book, Deep Work: rules for focused success in a distracted world. It’s a good read but, a few chapters in, it’s already clear that the author is giving advice to those who want to succeed in the current status quo. Deep work means eschewing “distracting” tools such as Slack and Twitter which, Newport believes, will lead to success. He talks about “joining the ranks of winners in our economy,” betraying a particular mindset about what constitutes a good society (the one we’ve got) and how to be successful (don’t use technology much).

“Our learning management system should be as easy to use as Facebook,” is a common refrain in educational institutions. Some, in fact, have even gone so far as to use Facebook as an LMS. Keynote speakers around the world ask rapt audiences whether they had to be coerced into using Facebook, or whether they received any training on how to use it. “No? Then, shouldn’t we be challenging ourselves to do better in terms of educational technology?” comes the (inevitable) rhetorical question.

I’d like to push back on the idea that a platform designed for frictionless sharing, but which is a known source of corporate surveillance should serve as a model for education. While technologies should not be harder to use than they need to be, we need to think carefully about whether what the tool allows us to do, and what we actually want to achieve, are the same thing. It goes back to the earlier point about hammers and nails: if every answer is Facebook, then that somewhat limits what the questions can be.

We have a large problem with digital skillsets at the moment, something I’ve explored through the lens of digital literacies (in my thesis) and then web literacy at Mozilla. No one likes to think of themselves as deficient in the area of digital skills, especially when up to 90% of a knowledge worker’s job can be digitally mediated.

The truth is, however, that we are all playing catch-up when it comes to the digital skills we need to function now, and in the future. I’d argue that a lack of these skills limits the kinds of organisations we can envisage. The new normal is likely to be less hierarchy and more organisations with “flat” structures made possible by approaches such as holacracy. Working in those environments means new mindsets, of course, but they also require radically different digital skillsets to what we have now. Self-organising with colleagues around the world, mediated by digital technologies, requires a level of tech-savvy far different to that which we’re teaching in schools and universities. As Alvin Toffler said rather presciently in 1970, “the illiterate of the 21st century will not be those who cannot read and write, but those who cannot learn, unlearn, and relearn.”

Our collective baggage around skillsets tends to be that we cling to those skills we have developed in a particular area. It’s not dissimilar to the stereotype of the middle-aged dad only listening to the music of his youth. Instead, I’d argue, we need to adopt a playful attitude, to experiment with new tools and ideas before weighing them for their utility. In the process, we will develop new skills which, in turn, will affect our mindsets!

All of us have baggage around toolsets, mindsets, and skillsets when it comes to technology. We should recognise this and, where relevant, seek to jettison some of this. Some of this baggage, however, is useful and exists for a reason. It gives us a steer on the new things we see emerging, and makes us (rightly) wary about simply jumping on a bandwagon.

If nothing else, we need to recognise that all of us need to reflect on our mindsets and skillsets, rather than blindly using the toolsets that we’re used to or are forced upon us.