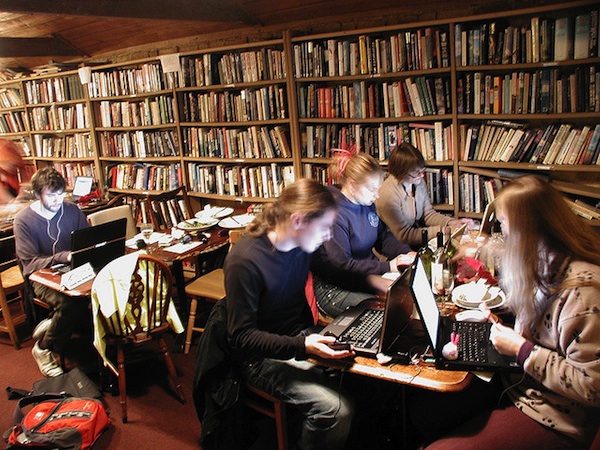 I was on a Google hangout with some friends the other day, and we were talking about the thisness and thatness of life. Conversations (as they always do) veered towards books we were reading and that started a torrent of recommendations and links, of books one should read, books one should absolutely read, and books that one should read or might as well just give up. The books were from different parts of the world. They were in different languages. If I had not been in this conversation with a bunch of people who are not only experts in their own fields but also inveterate bibliophiles like me, I would never have heard about these books. In the course of ten minutes, all of us had not only built bibliographies but also shared our e-copies of the books so that the other person can read, can know, can share the joy and pleasure these books contain. Through email, and file-sharing cloud platforms, we had exchanged books with each other, remotely, in the digital world.

For all of us who are not digital natives and well remember the joy of (and indeed continue our romance with) the hard copy, this sharing of books is a natural way of being. Even in the early ‘90s when the digital had not yet exploded into our worlds, we used to share and exchange books. In fact, a part of our monthly ritual was to make lists of books all of us wanted to read and then select who is going to buy which book, making sure that the same title is not repeated and that we get to buy a wide variety of books, which would then enter into a circulation that would easily exceed our small group of readers. We invented these circuits of lending, borrowing, sharing and re-using books early in my life, enabling me to read way beyond the limited financial resources of my childhood and the paucity of public reading infrastructure in the cities I grew up in.

Book reading was a collaborative exercise for us and it was premised on the idea that books were written to be read. And when they were not easily available, they were meant to be copied. As teenagers, over a summer break from school, we had occupied the local public library, armed with pens and single ruled notebooks, copying in our struggling handwriting, books which were not available for lending but we wanted to possess. I remember the joy of copying six books between five friends, over a period of one month, where every morning, we sat at the library, and copied, word by word, the books we wanted to have but could not afford to own. Eventually, we also photocopied these manuscripts and sold them for a small price to other bibliophiles who also wanted a personal copy, thus making it into our first summer job. We didn’t know then that we were continuing in the well written tradition of scribes of the14th Century who were the first copiers, allowing for manuscripts to travel across regions. We also didn’t know that we were engaging in acts of intellectual property theft or piracy, because the copying was encouraged both by the offices of the library as well as the parental authority.

It came to me as a shock, as it did to many people in India, when the recent facetious case was filed by a consortium of publishers – Oxford University Press, Cambridge University Press and Francis and Taylor – who are suing a Delhi University photocopying shop for damages and financial compensation because they facilitate copying of courseware textbooks for the students in the University. There are many legal tangles that are a part of this case against the small photocopying shop (M/s Rameshwari, in the lawsuit) which have been discussed – the fact that India has a fair-use clause in its copyright amendment, allowing universities, teachers and students to copy material for non-commercial purposes, that there is no limitation on the volume of this copying, that the photocopying shop inherited these rights under the aegis of the University, etc. However, I am more interested in figuring out why this act of copying, which has been historically celebrated in our ages of mechanical reproduction, has suddenly emerged as an act of crime in our digitally mediated environments.

The exception to the copyright act might come as a surprise to many readers in Western countries, who have succumbed to the pressures of the publishing mafia and have passed conservative laws to protect the commercial interests of publishers rather than the democratic potentials of knowledge. In India, this exception has been celebrated as one of the most liberal and progressive clauses, that enables students in developing countries to overcome the increasingly expensive education costs, and engage in knowledge dialogues that are crucial to critical education. It acknowledges the role copying has played in democratizing knowledge and information. In 14th century England, during the pre-print culture days, the scribes, who copied books by hand so that the manuscript could circulate, were held in high regard. The emergence of the printing press and the emergence of mass access to copied forms of written knowledge are recognized as the dramatic moment for a transition from monarchy to democracy. The digital revolution has harnessed the power of copying, leading to the Encyclopaedia Britannica shutting shop, even as crowd-sourced platforms like Wikipedia flourish, trying to produce the “sum total of all human knowledge” for free access to those who desire it.

This new regime of Intellectual Property regulation is an acknowledgment of the digital turn that has made copying so easy. Especially with digital natives, where copying is not merely an act of sharing but also an act of engagement, dissemination, participation and protest, it has threatened the ways in which older information regimes have been structured. And the Delhi University Photocopying case is just one in many desperate attempts to preserve those older forms of intellectual regimes rather than reconfigure it. However, the new thumb tribes, embedded in their copy cultures, are no longer paying heed to these older ideas. The young people who are immediately implicated are students in the University, but also others, who do not understand how access to knowledge can be superseded by profits from knowledge. And it is obvious from their conversations around this case that they do not think of it as an either-or choice. The two do not have to be mutually exclusive. But this ban on copying and vilifying it as an act of crime does severe disservice to the information ecosystems created by new technologies of copying and production and needs to be unpacked historically and contextually, by looking at both the relationship of technologies to knowledge, and the larger public good and function of knowledge in our information societies.