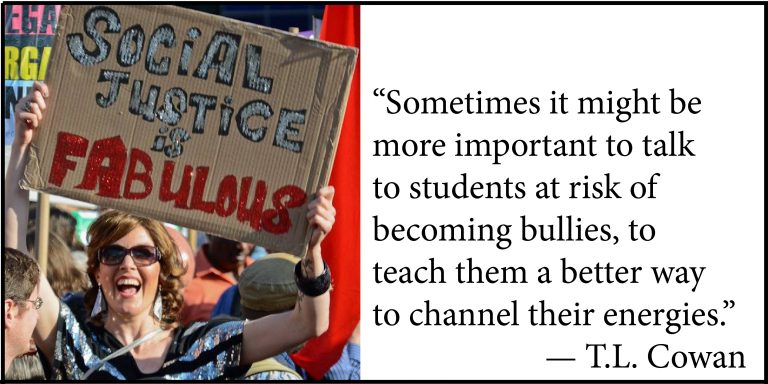 This post concludes the series that DML Central has been running based on interviews with members of the development team for the Center for Solutions to Online Violence by focusing on T. L. Cowan of the University of Toronto, who describes herself as a “writer, performer, activist, and professor” committed to anti-violence work.

Cowan described how she “worked as an anti-violence feminist activist with different community organizations throughout the 90s, which were bricks and mortar centers” and completed “anti-violence training as an undergraduate student.” She also participated “in street-based activism and women’s shelter-based activism and became especially focused on feminist analysis and activism that works to end violence that targets trans women and sex workers.”

Within the context of her graduate studies, Cowan explained that she realized that her history of anti-violence activism intersected with the kinds of ethical practices she was trying to put to use in her research: “as a performance studies scholar, one of the things I realized early on was that the advent of YouTube and MySpace was changing my field.” Instead of only having access to “a live show or certified copy,” cell phones could broadcast content without “consent and permission” and often “without the performer knowing.” In thinking through how performance studies, anti-violence work, and digital culture might be related, she was impressed by the usefulness of tools like the CSOV’s “power and control wheel,” developed by the Alchemists, or Mikki Kendall’s graphic story Paths as ways to think broadly about ethics, and pedagogies, including those ethics of scholars and teachers. “We need to think about mitigating harm to those deeply invested” in online self-publishing.

When asked about future challenges for the CSOV Cowan responded pragmatically by focusing on challenges of the present as they might be reflected in the past. “One of the biggest challenges is something that has always been a challenge in the feminist anti-violence movement is the belief that anyone targeted could somehow govern themselves more effectively to avoid problems. Like ‘rape crisis centers and women’s shelters,’ the CSOV is designed ‘to give women and nonbinary people tools to protect themselves and fight back while simultaneously defending the principle that we should be able to be vulnerable in public and not be the attacked.’ ”

In articulating her philosophy about abusive language and images online, Cowan credited the ideas of Wendy Hui Kyong Chun in Updating to Remain the Same in encouraging us to think about “how might we occupy networks differently?” Like Chun, she wants to share knowledge about “security protocols” and “identity protection” without blaming victims. She also praised the Allied Media Conference for uniting “art and activism to be organic and cyborg simultaneously, doing amazing intersectional work, and bridging community-based work and academic work.”

Cowan is particularly wary of initiatives that push “digital hygiene” on young people.

“I grew up low income, and I can’t handle this language any more. I had my hygiene surveyed continuously.” Cowan asserted that hygiene is a way to monitor and penalize “negatively racialized, negatively gendered, and underclassed” people, and to reproduce this discourse in the context of online safety and protection just perpetuates these modes of exclusion; it is a discourse that is completely unhelpful.

Rather than only focusing on victims, Cowan argued that perpetrators are too often being let off the hook. “Sometimes it might be more important to talk to students at risk of becoming bullies, to teach them a better way to channel their energies, to handle grief and rage without lashing out and enacting power in oppressive and dominating ways. Who is perpetrating these things and let’s focus our energy there?” To do this, she thought it was important to offer “multiple places to go to” rather than only consulting parents and teachers and praised peer-support networks, particularly if they are not staffed with “just the kids who are vulnerable and at risk.” She asserted that “training the kids already demonstrating aggressive behavior, for me, it is taking anti-violence and anti-oppressive to its logical conclusion to think really broadly rather than just how do you protect yourself, even if that seems fastest and most doable in a limited school day. I also learned more about transformative justice and community-based justice at Allied Media, and would love the folks who are doing this work to be consulted in the larger project of ending online violence.”

When it comes to advice for teachers, this former “Chair of Experimental Pedagogies” advises instructors to implement with “low risk assignments” and focus on grading reflections on the process rather than the product that might be flawed by trial-and-error. She cited a number of pedagogues who model this practice, including Alexandra Juhasz who taught some of the first college classes about, with, and through Web 2.0 technologies like YouTube. “You have to make it possible for them to get an A in something that they are just learning.” Cowan also recommended the work of Anna Anthropy to DML readers, particularly Anthropy’s essay chapter called “Making Games” in Rise of the Videogame Zinesters: How Freaks, Normals, Amateurs, Artists, Dreamers, Drop-outs, Queers, Housewives, and People Like You Are Taking Back an Art Form, which reads:

Perfection isn’t a useful goal; if anything, it keeps amateurs from getting their feet wet and authors from finishing their works.  It’s an ideal that hinders more than it serves. Imperfections, creative accidents, and compromises, on the other hand, give a game personality and individuality.

Cowan observes that this same attitude of self-forgiveness can be important for instructors working outside of their comfort zones. “I find it most helpful in teaching games, which is something I am not an expert in. As a teacher, you need to make your learning process transparent, show them how you are creating a game, editing a Wikipedia page, making a gif or a meme, or making a video.” Most important from Cowan’s perspective was modeling “skills of curiosity, trouble-shooting, and collective and collaborative problem solving.”

“When I was learning to teach Twine, Alexis Lothian’s very generous Twine pedagogy pages” at Queer Geek Theory were helpful for setting parameters. “A game has to have a certain number of paths, some character development, and images. Now work in groups; see if you can collaborate. Maybe one of you is a good writer, one of you is more comfortable with code, and one of you has a great design sense. But, I always make sure they learn game production in class so they don’t have to go home and learn it by themselves.” If a student asks about uploading an image or changing a background, Cowan recommended not pretending mastery. “I don’t remember. Let’s Google it or go to the FAQ.”

In addition to reflections, she also recommended that students write research statements to articulate the concepts they were working with, which could be derived from course readings. “I encouraged them to think about their projects as technological research and conceptual research. In their research statements, they could list everything they learned to do from making hilariously tacky transitions in PowerPoint to splicing together found video. By the end of the semester, they felt like they could learn anything, and that was really, really fun.”

Banner image: Performance artist and University of Toronto assistant professor T.L. Cowan as her alter ego the “Aging Supermodel.” Taken in New York City during the 2012 May Day filming of her performance and short film: GLITTERfesto: An Open Call in Trinity Formation For A Revolutionary Movement Of Activist Performance Based On The Premise That Social Justice is Fabulous. Photo by Jasmine Rault