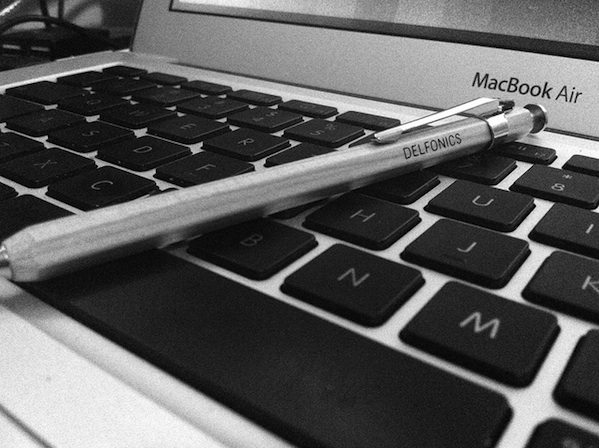 For people on the academic calendar, resolutions tend to be undertaken in the summer months rather than at the start of the new year in January.  This summer I am picking up a pencil and rethinking my relationship to visual communication with a resolution to spend more time in the weeks to come drawing.  I would urge others in the DML community to try to do the same. To prepare myself for this task, I’ve bought some sketchbooks and pencils for the first time in decades.  Of course, this activity feels strange to hands that have spent so much time at a mouse and keyboard as their primary tools for thinking.

With the rise of new mass-market tablet devices, such as the Apple iPad, I suppose more computer users might find themselves similarly urged to do more sketching by the availability of new interfaces for drawing.  Some classrooms with the resources to spend on novel gadgets are following the lead of the consumer electronics industry, as children begin to do line drawings and color in outlines with their expensive sleek new digital devices.  But for me the haptic experience of using a stylus or touch screen is certainly different from working with the traditional implements of drawing.  Furthermore, the challenge of trying to reacquire manual dexterity in the digital age might be nothing compared to the difficulties of overcoming the social prohibitions on visual communication in learning environments.

In other words, most kids doodle, but as they get older they learn not to, in response to sanctions from their teachers about drawing during class.  Doodling is considered counterproductive and a sign of distraction or subversive behavior that needs to be disciplined.  Much as using online social networks during learning time has been highlighted during our current “distraction panic,” even though wired learners may be also building relationships with online affinity groups that could have lifelong benefits in a networked world, using a writing implement for conceptualizing ideas or communicating with others visually without written text could give young doodlers certain advantages.

As interviews with Trebor Scholz and Wayne Yang in this blog have shown, creating work for the paper page isn’t necessarily inconsistent with the goals of digital media and learning to think about new literacies critically.

In my own case, I find myself back at the drawing board for a number of personal reasons that might be relevant to the experiences of other learners.

First, I recently agreed to contribute a piece to the hand-made zine on Critically-Engaged Making that is being edited by Garnet Hertz in which hand-drawn work is explicitly being solicited.  Hertz is an LA-area hacktivist and tinkerer who is active at Machine Project and who is seeking submissions with “something useful to say about maker/DIY/hacker culture, critical design, craft, experimental electronic art or critical technical practice.”

Second, I am one of thousands taking the open online Stanford course on human-computer interaction (HCI) being taught by Professor Scott Klemmer.  Klemmer considers producing storyboards to be critical to learning to think creatively and skeptically about design issues and to see the whole scene of social interaction around computing in ways that capture people’s motivations, values, and goals.  Klemmer urges his online students to become less inhibited about their drawing skills, and he even argues that “bad drawing” can be an “asset,” because it encourages others to focus on the ideas being communicated rather than “pretty pictures.”  Klemmer teaches the technique of drawing simplified “star people” that he learned from Bill Verplank, and he also shows compelling illustrations made with stick figures.

Finally, I have been thinking about “Taking Comics Seriously” in connection with collaborating with my writing partner Jonathan Alexander and the artists of Big Time Attic as we prepare the manuscript of Understanding Rhetoric: A Graphic Guide to Writing, which will appear as a comic book next year.  Like many in the DML community, including Henry Jenkins, I am interested in making connections between fan learning and formal learning by looking at visual culture.  On a less abstract level, feeling comfortable with drawing would probably save a lot of time as I struggle to explain ideas to the artists, since a few strokes might communicate more effectively than several lines of verbal instructions.