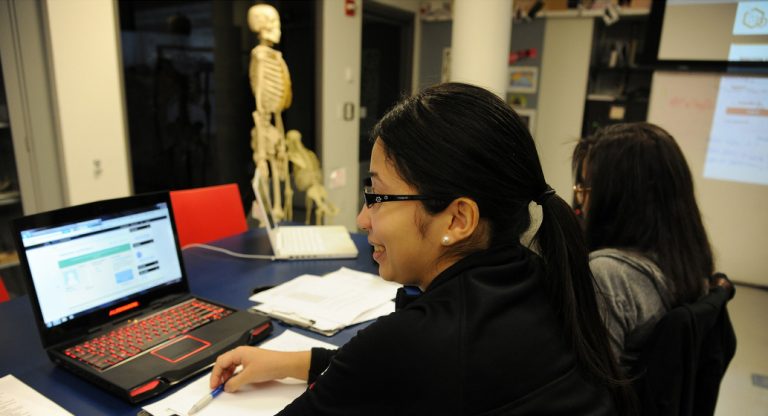 Do you think you can pass the supreme BadgeGeek test? If so, good luck. Your challenge: make it through this interview. To appease my inner BadgeGeek, I reached out to Erin Knight, executive director of the Badge Alliance. To conclude my four-part DMLcentral series on badges, I needed her help. I wanted to gain a better understanding into her fascinating new organization but, more importantly, how it might just have solved a major problem with badge design I explored in my last post: the conflict between local versus network-wide badges. (Note: this is an abridged version of a longer interview, available in its entirety online.)

Thank you so much for joining us today, Erin. Please tell us about your history with badges and about your recent move from the Mozilla Foundation to the Badge Alliance.

Sure. I’m Erin Knight and I’m the executive director of the Badge Alliance. I was involved with the early days of thought experiments around badging that began as early as fall of 2010. I was hired by Mozilla to write an initial white paper to explore digital badging and an open badging ecosystem. And, then, I turned to building the Mozilla contribution to this movement. Moving to the Badge Alliance was a natural evolution, both for me and the work. Mozilla built the foundations for the work, including the initial technical and social infrastructure. But, it’s always been bigger than any one organization and that was even more the case as this has continued to grow.

Once upon a time, when email Listservs first became popular, the people managing them and nurturing that community were often called Listmoms. So, are you sort of like the original BadgeMom?

I am. I’m the first BadgeMom. There are lots of BadgeMoms now but, yes, I guess I was the initial one.

So, what is the Badge Alliance?

Cities of Learning is the next evolution of the Chicago Summer of Learning that we did last summer. It captured all of the learning across the city of Chicago over the summer through digital badges and helped connect youth to deeper pathways of learning. The learning was then carried back into the schools and local community after the summer.

That work had a lot of successful elements. And, so, Chicago is doing that again. And, there are now five other cities that are also doing a pilot of badging across their cities this summer, with another four to five that are already starting to work on 2015.

Which cities are planning to do so?

It’s not just in the U.S. It’s spreading outside of the U.S. as well?

It is. There’s interest from Vancouver, from Quebec, a number of U.K. cities. The initial pilots are all mostly English speaking, but that obviously is a big kind of issue that we’re going to be working on for 2015 and beyond.

Thank you for providing an introduction to the Badge Alliance, as well as to the Cities of Learning. With that as background, I wanted to ask a question that follows from the recent posts I have been writing for the DMLcentral about badges.

You know I’ve been involved with developing digital badging systems for many years. And, there’s always been a relationship between the immediate benefits that we can actually achieve with learners and the aspirational benefits we hope will develop over time. The immediate benefits include things like increasing youth’s motivation for learning or the ability for youth to develop language around their new skills and knowledge. And, these are things we can actually see and can be measured within a program.

Then, there are the aspirational benefits, the hope that with badges, youth could transfer something outside that original learning context, outside that museum, outside that library, outside that after-school program; that badges will be a value and a benefit when viewed by someone in a college admissions office or by someone reviewing their resume for a job. And, those aspirations have continued for some time and been part of what we’ve always hoped for, that badging systems could achieve this once they move from outside individual learning contexts and move across networks that can connect them.

We’ve talked for many years about the possibility of such networks, and how we might build them, but they don’t yet exist. So, part of why I’m excited about the Badge Alliance is because it is the biggest effort yet to achieve this goal, and I think it has the best shot at pulling it off. That was part of why I wanted to speak with you today.

But, one of the things that I’ve grown concerned about, as we’ve put badges into practice, is a divide between our ability to design badging systems which offer value to learners within an institution versus our ability to create badges that have value throughout an ecosystem of learning settings. My concern comes from a conceptual level. A big part of the value of a badge exists within a particular learning context. That is where its value comes from. It is situational. As a result, it is hard to bring that value outside that context. When institutions build badges, they build what they need for their particular institutions, for their particular context. But, then, when I see networks form and people are thinking about skill sets that are being addressed across multiple institutions, across a city, across a body of knowledge… at the end of the day, they will be implemented at the local level and will find their full value there.

So, I am concerned about our ability to take the local value of badges and transmit them across a network.

But then, last March at the Digital Media and Learning Conference, I spoke with someone who participated in the Summer of Learning and heard what I think might just be one of the most significant innovations I’ve come across in badge design this year, and that might just be the answer to solve this challenge.

The person I spoke with said that, last summer, she focused on her own badges, for her own institution. There had been encouragement for different organizations to collaborate in the development of badges across institutions, but that was hard and didn’t work for her. This just confirmed my concerns. But, then, she said something else. She said that now what’s being discussed is something different, that there are a series of categories. Each organization will still make its own badges, its own specific badges needed in its local system, but… and here’s the secret sauce… tag them or associate them with these larger categories.

So, essentially, people can still make badges localized for their own immediate needs, but they can put metadata on top of them, to give them value across the Chicago network. They don’t have to create badges that match the tags — some badges will ONLY live within their local network — but, anything that CAN be tagged allows those local badges to be standardized, or globalized.

At least that’s what I was told. A large reason why I wanted to speak with you today was to learn if this was true, and how it was now impacting the larger Cities of Learning project?

So, yes, you heard that correctly.

Within the Open Badges standard, there’s a field for tags. It has been there for awhile and anyone can use it any way they want. But, what really came out of the Chicago work last year, and around the thinking about network level badges, was a need to at least scaffold the use of tags, and think through what a taxonomy might look like for that network.

Last year in Chicago, the taxonomy was around STEAM (STEM plus Art), as well as a particular type of badge. There are participation badges that you got based on showing up. Skill badges tied to an assessment demonstrating a particular skill. Achievement badges which were a kind of combination of skill badges.

So, what a STEAM badge meant – what it meant to have to be categorized as STEAM — was standardized, as well as what the types were. Carla Casilli, our director of design and practice, did a ton of work with over a thousand badges that came from different organizations, to map them against this taxonomy so that we understand both their content and connect them into other learning opportunities for youth. We want to have some sense of how to evaluate them or rank them. So obviously a participation badge was weighted slightly differently than an achievement badge, which was more robust and heavily assessed.

We did that for Chicago to make sense of this crazy deluge of badges that we had. And that worked really well for being able to pull together such disparate pieces across so many different organizations. And, I think there is a lot that we learned. Just categorizing things as science or technology or engineering was a little bit too abstract. It didn’t often highlight the nuances within the learning opportunities.

So, where are we going with Cities of Learning? Chicago is building the taxonomy further. It’s much, much bigger at this point. We’ve talked a lot about it and about how we scaffold the other cities. And the decision is really, you know, obviously not to impose a single taxonomy on every city, or on every network, but to simply help them work toward  their own taxonomy. So, I think that’s big.

I’ll say a warning, however. You know, there have been people who have been asking for a taxonomy since Day 1, and really wanting Mozilla at that time (who was kind of the main player in the early days) to define the taxonomy. Mozilla resisted that and, I think, even at Badge Alliance, we still, at this point, pretty firmly resist creating one taxonomy to fit all because the whole point of badging is to be flexible and innovative.

That’s not to say that taxonomies are not important. I think what we’re still finding with the network-level badges is that to be able to define them within this network or broader community is very valuable, but without forcing the whole ecosystem into a particular bucket.

Erin, thank you so much for speaking with me today.