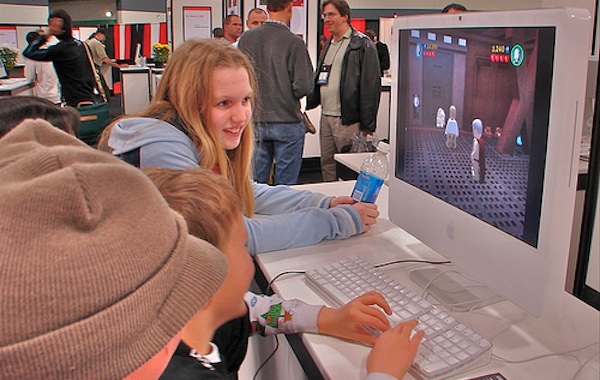 Some recent research findings have got me thinking a lot about Franz Kafka’s story about a young clerical worker who wakes up half-transformed into a giant insect. No, it’s not research from the new journal Horror Studies but something even more horrifying from pediatric research. Research published in the August issue of Pediatrics by psychologists from Iowa State University has suggested a causal link between playing video games and children developing Attention Deficit and Hyperactivity Disorder (ADHD). The study reported that children who exceeded the two hours per day of screen time recommended by the American Academy of Pediatrics were 1.5 to 2 times more likely to be above average in attention problems. The researchers commented: “ADHD is a medical condition, but it’s a brain condition. We know that the brain adapts and changes based on the environmental stimuli to which it is exposed repeatedly. Therefore, it is not unreasonable to believe that environmental stimuli can increase the risk for a medical condition like ADHD in the same way that environmental stimuli, like cigarettes, can increase the risk for cancer.” Cue the sudden sprouting of mandibles and antennae! But also:

Earlier this year a clinical review conducted at Newcastle University, and published in the British Medical Journal, suggested that playing video games was responsible for the return of the nineteenth century illness rickets. The official press release stated:

“A traditional UK diet often lacks vitamin D and this could be a big reason for the increasing problem, as well as changes in lifestyle, such as children staying indoors playing computer games. Rickets, where children develop painful and deformed bow-legs and don’t grow properly is a condition linked with poverty, starvation, Victorian times or those in the developing world – not with 21st Century Britain.”

The resulting newspaper headlines were seemingly so absurd that a British politician even blogged about it in dismay. What the study was stating was that sitting in the dark and eating badly tends not to do your body much good since everyone needs a good supply of Vitamin D, which comes in part from exposure to sunshine and from eating certain types of fatty foods. Nonetheless, the mainstream response suggests something closer to a child sprouting six legs, growing a carapace and licking your dinner.

The fascinating thing about these stories is not really that video games are given as probabilistic causal factors in adolescent ADHD and rickets (although it could be methodologically debated), or the obvious “controversy” about how they were reported (although there is an interesting media studies perspective on the circuit of research articles, press releases and newspaper headline production).

What’s interesting is that both stories are concerned with children’s bodies. Children’s flesh-and-blood bodies are a continual contemporary source of fascination and anxiety, as shown by perennial summertime debates about toddlers running naked on the beach. Grotesque anatomical and medical deformities such as rickets are the climactic endpoint of this narrative of anxiety about adolescent bodies.

In the ADHD study, then, video games are described as an “environmental stimuli” that, like cigarettes, can cause a physical medical condition in the brain. In the rickets study, video games are part of a set of lifestyle and media habits that exert a deforming influence on children’s bodies. We’ve become terrified by the effects of digital media on childrens’ bodies, or at least fearful about the risk that children will be grotesquely deformed by digital media, a little like Kafka’s doomed clerical worker or Jeff Goldblum half-metamorphosed in The Fly.

Childhood scholars have been arguing for some time that common ideas about childhood and children are socially created. That means that what is known about children is largely based on human ideas and socially shared knowledge rather than merely on a series of naturally-occurring physical and mental developments. For example, childhood is often defined as a temporal period from 0-18 years, of which long sequences are organized around the terms and timetables of school. So a dominant way of thinking about childhood today is as a temporal period marked out by the rhythms and routines of education, which itself depends on westernized assumptions about childhood as a preparatory phase for participation in the adult routines and rhythms of work.

It’s a powerful way of managing children’s bodies, by synchronizing their “body clocks” with the clockwork of school. But this way of thinking about childhood might not be appropriate as kids interact more and more through digital media and experience different patterns of time from the routinized school timetable.

Outside of the sequences and timings of school, what childhood means is even more debatable. Are teenagers children? The category teenager was only invented in the 1950s largely for marketing products in the new consumer culture (as Jon Savage’s book Teenage documents).

News media are, of course, a major contributor to mainstream understandings of children. Children here are variously “angels”—innocent pre-adults—or “demons”: brutal and feral sub-humans, or as one UK tabloid newspaper charmingly described them, a “terrifying generation of murderous, morally blank wolf-children, fatherless, undisciplined, indulged one minute then brutalised the next.” News media routinely plays this kind of rhetorical Jekyll-and-Hyde trick with children, and it exerts influence on educational policymaking too.

A good example in relation to children’s bodies is the mainstream coverage of childhood obesity, and the direct policy interventions which have been designed to control and regulate children’s eating and physical exercise. Knowledge about health is now routinely transmitted to children (and about children) through popular culture resources such as television and other media imagery, then translated into classroom pedagogy through health education curricula.

This is raw bio-power: the management and control of children’s bodies for political and economic purposes.  Kids are required to work on their bodies: to do their “body work”  as well as their school work. 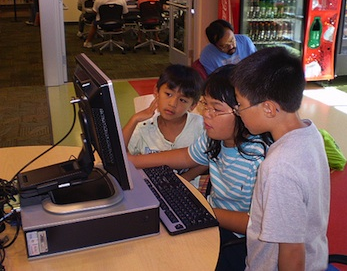 The scholarly understanding of childhood is now, then, having to get to grips with the child’s body, and a bio-social perspective on education and media is becoming increasingly important. It’s not just a case of understanding how bodies of knowledge about childhood are constructed and contested, but of how children’s biological bodies are socially constructed and contested too.

Technology and media become significant both because of the development of new ways of imagining and representing kids, for instance as a “digital generation” or as “natives,” and because technologies are being represented as exerting effects on children’s bodies. Technology critics like Nicholas Carr, author of The Shallows and “Is Google making us Stupid?” reach the conclusion that our brains are being “re-wired” and “un-educated” by prolonged digital media use, nowhere more evident than in the supposedly attention-deficit young. Mainstream concerns about video gamers getting fat in front of their screens, or kids developing deformed PlayStation thumbs continue to abound—doubtless why active games and fitness gaming get the moral high-five in comparison to the moral kicking meted out to, say, the GTA franchise. And now, seemingly, scholarly studies are linking digital media to ADHD and rickets.

So children’s bodies are increasingly said to be subject to the deforming influence of digital media. Approaching this problem productively means going beyond the critique of “evolutionary” technological determinism (and its counterpart biological determinism). The significance of re-thinking assumptions about children’s bodies is to re-examine how research and practices might face up to the more critical and negative “body work” implied by analysis of video games as causal factors in rickets, ADHD and the “un-educating” of our neuronal circuits. In order to respond to these sensational narratives of bodily or neuronal deformity, education needs to be recognized as a dynamic “bio-social” process involving the body, mind and culture augmented by digital media.

Designers of digital media increasingly recognize the significance of tactile and kinetic sensations in mediated experiences (such as active gaming), and more technologies can now be attached to and inserted into human bodies.  So these issues of “body work” in media and technology are becoming crucial in educational research and practice. Sports sociologists at Loughborough University writing in the British Journal of Sociology of Education, for example, suggest that the body will become a “credential” for future employment as employers look for “aesthetic labour skills” such as appearance and body shape, therefore:

“…making the bodies of young people ‘legitimate’ sites for intervention and control and raising the question of whether schools should have a role in developing such presentational awareness in them in preparation for the labour market.”

How can digital media research deal with this shift in thinking about children’s bodies? Pretty soon, just as we talk about kids powering up to play video games, could we be talking about kids “bio-powering up” as they use their bodies as aesthetic credentials alongside or augmented by their skills with digital media resources? Being involved in debates about digital media and learning inevitably involves ideas and ideals about childhood, and about the structure and operations of education systems—but maybe neglects to interrogate the biological dimension of childhood or the political control meted out by educational systems over children’s bodies. Yet a better bio-social and bio-political understanding of childhood should allow us to engage more productively with emerging issues such as reports about the anatomically deforming influences of technology and media, and to think seriously and sensitively about what “body work” and “bio-powering up” might involve as an approach to digital media and learning.