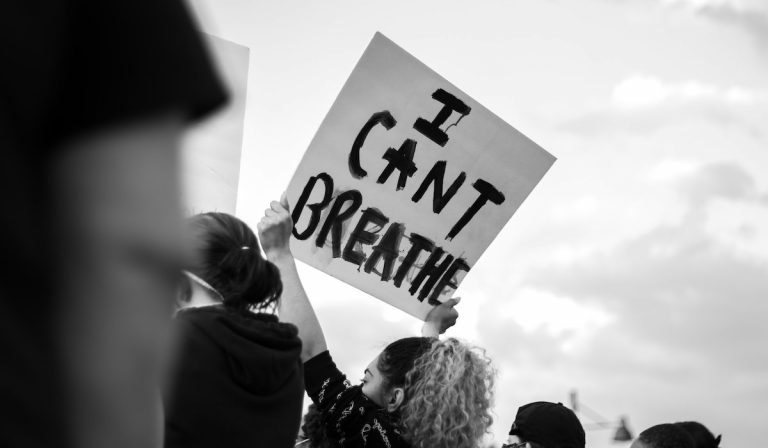 These days, it seems impossible to escape the crushing psychological weight of Black death and dying. Everywhere I turn – my social media accounts, local and international news, attendance at protests – the suffocating grasp of Black death and dying – reinforced and substantiated by anti-Black racism – is always there, waiting to strangle the last breath out of me.

George Floyd’s haunting words echoed in my ears. I stood in my driveway, hands bound by the bags of groceries I had just bought from the market, and felt my chest getting tight. “I can’t breathe,” I mumbled, and felt my groceries – and my body – slip towards the ground.

As I laid there, face against the gravel driveway, I was reminded of George Floyd’s last moments as he gasped for breath and pleaded for his mom. His words echoed my own, and the pressing reality of our linked experiences as Black Americans became painfully clear. Suddenly, the tightly bound layers of trauma I had worked so diligently to suppress began to unravel.

The breathlessness of the Black experience – both literally and figuratively – was becoming painfully clear.

As I laid there in my driveway, incapacitated by the intersectional and multilayered trauma of Black death and dying, I started to think about what it means to survive white supremacy and anti-Black violence. What does it mean for me – as a Black woman – to center and pursue Black life and living at such a historical moment?

I chose to open this article with a personal vignette of my own struggles with mental health in the midst of the 2020 movement for Black Lives to lay bare the psychological, physiological and spiritual trauma of racism and anti-Black violence.

But, let me be clear. This article is not about the trauma of Black death and dying, but about the hope and possibility of Black life and living. About the transformative possibilities of radical feminist healing and restoration. About fighting the biological battle against high blood pressure, anxiety, heart disease, and premature death from living under racial domination all while we struggle for the physical rights to live, breathe and matter in this world.

My position at the precarious nexus of race, class and gender oppression has equipped me with a lifetime of experiential knowledge on race, racism and resistance in the Black community. Over the past 6 years, I have leveraged this personal awareness of anti-Black racism into a dissertation that examines the educational, emotional and physiological effects of racialized trauma on Black women and girls.

Qualitative data from my dissertation study, along with written responses from former and current Black students and mentees, have revealed 3 means of leveraging social media for self care and digital wellness: 1) Black Joy & Laughter; 2) Rest, Relaxation & Self Care; and 3) Digital Wellness & Social Media Therapy

The transformative power of Black joy has been thoroughly documented, and activists and scholars alike agree that Black joy is a necessary and indispensable part of revolutionary change. This, and my other reasons, is why the Black Joy movement sprouted alongside the Black Lives Matter, and celebrates the happiness, playfulness, and freedom that undergird social justice. Not surprisingly, a common strategy used by my dissertation study participants as well as my students was participating in digital spaces focused on collective healing through joy, art and laughter.

Pages like #Blackgirlsrock and #Blackgirlmagic were regularly cited as positive, gender-affirming spaces that provided a sense of joy and pleasure during times of crisis. Danielle adds that she’s drawn to joy-centered social media because, “I can’t find anywhere else where you get those affirmations. It’s nice to see yourself represented in images and wording that is not putting you down, but telling you the great things about yourself and other people like you who are doing great things.” Social media spaces that allowed for humor and medicinal laughter during times of crisis were also identified as particularly restorative. For instance, Iyanah says, “Black Twitter is so great… it feels like a community space you can go and laugh or grieve or just connect with the rest of the Black community.” Likewise, Danielle says, “People on Twitter are just funny. I don’t understand why Black Twitter is free. I don’t understand why people aren’t being paid because I can just sit there and just laugh for hours. Especially if I’m feeling bad. It’s just funny.” Natalie notes that reading meme threads is one of her ways of coping with racial trauma. She says, “I actually the other night read through an entire thread of memes about this racist building at Yale and people fighting about it. And it was interesting to kind of read that fight, but also hilarious and uplifting because of the memes people of color were making to fight back.”

Art allows me to express my inner feelings…It listens to me when no one does and transports me into a tranquil place. It’s my therapist…Music holds emotions and when i run to music when i have racial battle fatigue or PTSS, i am blanketed by sound and immersed in the mind and feelings of the artist.

His awareness of the transformative and healing potential of art and music is why he created @jordan.axa. Here are some resources that leverage Black joy during times of racial trauma shared by current and former students, mentees and study participants:

The psychological weight of Black death and dying often triggered feelings of fatigue, exhaustion, anxiety, depression and insomnia for the Black girls in the study. Many of them felt it was their job as young Black women to lead the Black Lives Matter movement. When asked to discuss Black girls’ hyper-participation in digital movements for social justice, Jordyn says, “it’s intergenerational where we’ve always had to do it.” Adriana echoes these sentiments, stating, “when Black men are killed in the street like dogs, the first people to say something are Black women. Black women are the ones to be vocal about it. Black women are the first ones to want a community outreach, are the ones to plan the funerals, are the ones to take care of the finances.”

Despite feelings of fatigue and exhaustion, Black girls were adamant about their indispensable role in the movement for Black lives. Sydney notes, “I just want to zone out. But then it’s like the next day you just have to get up and go. There’s too much to do.” Sydney’s sentiments were reflected by a majority of the participants, who felt that being debilitated by mental illness and emotional fatigue is not an option for Black women. Alleyah is of the firm belief that Black women, “can’t afford to fall apart. You have to take care of yourself and other people. and what is the alternative to moving forward? Dying?”

For Black girl activists who draw upon the image of the “strong Black superwoman” that doesn’t need a break, stepping back from activism can be particularly difficult and guilt-inducing. In recognizing the stigmatization of “taking a break” that often pervades the Black communities, the participants emphasized the need for self care during times of peak racial crisis. Bre’anne says, “if you don’t take care of yourself…you’ll go crazy thinking about all this injustice.” For many of the participants, self care included stepping back and away from politicized social media – albeit temporarily. While the young women in this study discussed disengaging from racialized social media conversations and content, they simultaneously asserted that identity-affirming social media spaces were particularly restorative, especially those that linked rest to resistance.

Here are some rest-as-resistance resources shared by current and former students, mentees and study participants:

While participants were readily aware of how over-exposure to anti-Black racism online – whether by comments or graphic videos – they nevertheless struggled to access formal mental health services to address their feelings of fatigue, anxiety and depression. Danielle captures the stigmatized nature of mental health for Black women who are expected to be strong, superhuman and unbreakable activists:

Look at how many of us feel that we can’t talk to one another. Look how many of us feel that… if we had’ve just tried to bend ourselves a little bit more perhaps that struggle wouldn’t exist…I think that also contributes to why many Black women carry these different stigmas… because we’re discouraged from speaking about [mental health issues]. So even having the extra support, a shoulder to lean on, people who genuinely care about us seems impossible. I think those are the things that really cripple us the most and that keep us harboring pain… because of all we have to carry, we end up harboring pain and other people’s problems, and we have our own [problems]. So here we are, we’re dealing with bipolar disorder, depression, anxiety,… it just really wears and tears on us.

Jordyn reiterates the difficulty Black women experience in identifying and addressing their mental health concerns, noting, “Black women are always the glue that keeps everything together… and I know Black women are suffering from it, I just can’t really pinpoint it because of this strong woman mask that I’m still struggling with.”

In recognizing the stigmatized nature of mental health concerns in many minoritized communities as well as the inequitable access to mental health services IRL, the Black girls in my study proposed the following resources for Youth of Color seeking support during times of crisis:

Despite the pitfalls of social media technology – particularly around the hyper-circulation of racially traumatizing imagery and the surveillance, suppression and silencing of Black youth’s activism and more – youth of color are nevertheless reclaiming and taking up space. It is powerful to know that even within digitized systems of white supremacy, where algorithmic oppression trafficks in and profits from anti-Black violence and Black death and dying, Black youth continue to subvert and repurpose technology for their personal healing and collective liberation

It’s been 15 minutes, and the waves of my anxiety attack have finally started to lull. I turn and lay on my back, staring up at the sky above. Audre Lorde’s words come bubbling up from somewhere within:

“Caring for myself is not self-indulgence, it is self-preservation, and that is an act of political warfare”

I know now that in order to survive this moment and the breathlessness that is anti-Black violence, I must pursue – vigorously and unapologetically – the possibility of Black life and living.

Slowly, the breath starts to return to my lungs.

Tiera Tanksley is a postdoctoral researcher with the Youth Connections for Wellbeing and All Together Now projects at UCI’s Connected Learning Lab, and will be joining University of Colorado Boulder’s School of Education in the fall as Assistant Professor.