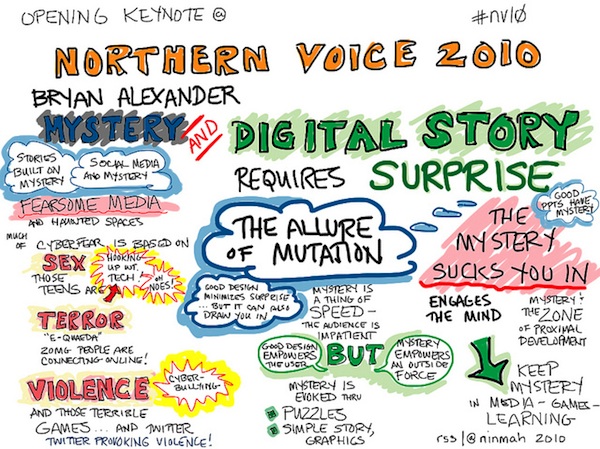 I knew Bryan Alexander was intense when I first spotted him in the audience at a talk I gave in the late 1990s. Just look at him. Old Testament prophet? Civil War general? Straight out of Middle Earth or Hogwarts? It’s not just the beard and the eyes. When you watch my video interview with Bryan (below), you can’t help but notice he is always in motion. I’ve actually seen him pound the podium. He’s an educator and an educator of educators who can’t disguise his passion and doesn’t care if he stands out in the crowd. A man after my own heart. At that late ‘90s gathering, I had been speaking to an auditorium full of educators and Dr. Alexander was one of those who joined me for dinner afterward. I invited him to join a private virtual community I had organized in 1998. In 1999 and 2000, when I cat-herded a confederacy of virtual community consultants (a decade before thousands of people began describing themselves as “social media gurus”), we worked together to help start-ups and established companies try to plan, organize, and grow virtual communities. 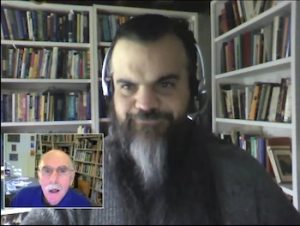 Not long after we met, Alexander collaborated with other Centenary College professors on online simulation games in an interdisciplinary course on the Vietnam War. A couple of years later, as Director of the Center for Educational Technology for Middlebury college, Alexander reflected on the experience — ten years ago. These days, he writes for publications such as Educause Review and roams the world of liberal arts colleges, weaving networks of people, media, and pedagogy through future practices such as prediction markets, scenarios, and indicators. Don’t take my word for it. Check out the video and experience his raw energy directly. A few excerpts:

What does it mean to read on a Kindle, to read on an iPad, to read on a phone? Are we in the era of social reading, where you and I can read the same book, and then share annotations through the web or through mutual devices? Trying to figure out the specific technologies in some ways is not as important as looking at how we make use of it.

We are trying to help colleges think through, strategically, the future of higher education and their institution in that landscape. There’s a whole battery of futures methods used by corporations, by nonprofits, and by governments, from prediction markets to delphi reports to environmental scanning. We want to translate and bring those methods to small colleges so they can get a better handle on where their students will be in five years.

Sinking yourself down into a game about history opens up your understanding of possibilities. The events that in retrospect look so foreordained and so determined become more complex, more unstable, and more uncertain. You can really see decisions as live things and not as automatic blunders.

We’re trying to help these schools have ways of thinking about the future in a structured and provocative way, which is not trivial. It’s very difficult for us to throw our bodies forward. It’s easy to think about what we might be doing tomorrow as individuals, but to think about complex institutions involving thousands of people over a decade, it’s very challenging and exciting.

What we found — to our surprise — was a lot of optimism about open access and open education resources. We were surprised because the adoption of open content still seems to be gradual, incremental, not yet logarithmic, or exponential. We found that people were very optimistic about the number of open access journals available and about the number of open content items. That was a huge eye opener for us.