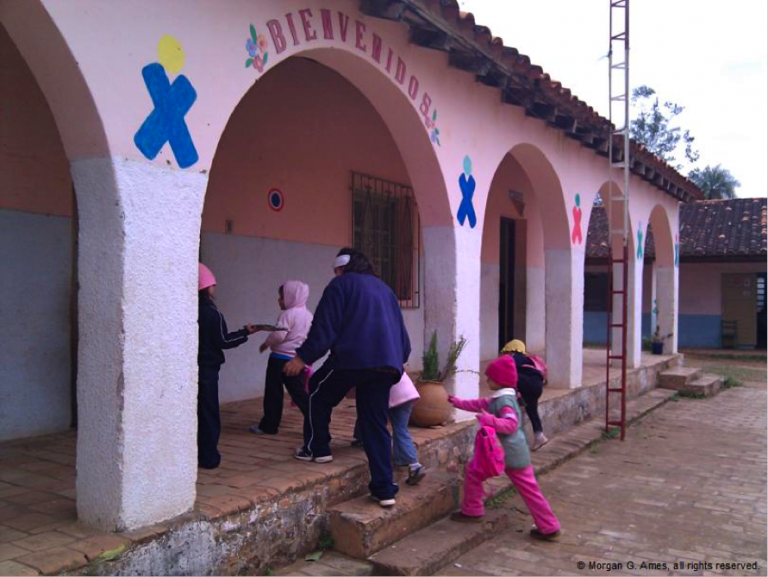 Can technology really transform education in developing countries? That was the goal of Nicholas Negroponte’s One Laptop Per Child, but since its founding in 2005, the organization has been the subject of debate as many in the education sector have questioned its utopian vision and its ability to fulfill its promises.

In 2010, Morgan Ames, a PhD candidate in Stanford’s Department of Communication, spent six months examining these debates by conducting ethnographic fieldwork with Paraguay Educa, a local non-governmental organization (NGO) responsible for leading the deployment of 9,000 laptops in Paraguay starting in 2009. Ames presented her research findings to a group of junior scholars and mentors at the 2012 Summer Research Associates Institute.

In the video below, Ames talks about the hopes and potentials of the OLPC program and the realities of the learning that took place. Even with Paraguay Educa’s ongoing teacher training, Ames observed that the majority of students used the ‘XO’ laptops for media consumption purposes – watching movies or listening to music – while only a handful were inspired to produce creative projects using built-in education programs such as Scratch, eToys, and Turtle Art. Ames notes that parental support at home was a crucial component in shaping a child’s motivation and educational interests. According to Ames, support in the form of full-time teacher trainers also made a significant difference in use of the laptops in the second half of the program.

Below are a few key takeaways from the video, but the entire interview gives a personal look into the challenges NGOs, which often have to set lofty goals to attract funder support, undergo when undertaking these deployments.

There were definitely kids who were more adept – who were really passionate about a particular program. They would even label themselves “scratcheros” and “etyoseras,” and it became an important identity because they became local experts that people could go to.

When I went home with them and I interviewed their parents, I found out that in all cases their parents were already very oriented towards education. In many cases their parents didn’t know much about computers in particular, but they were very good at identifying things that were educational vs. not educational…They would steer their kids towards thinking critically about things – towards asking questions.

If you don’t have something helping guide you through how to do really interesting things with this new machine, I think it is really hard to discover on one’s own. I think this is one thing that a lot of NGOs and a lot of discourse around education in general underemphasize because there is a lot of focus on the exceptional students.

In Paraguay, One Laptop Per Child has definitely been an incremental improvement, but it is incremental. If social change were easy, we’d see it happening all over the place all of the time. It’s difficult to change these institutions.