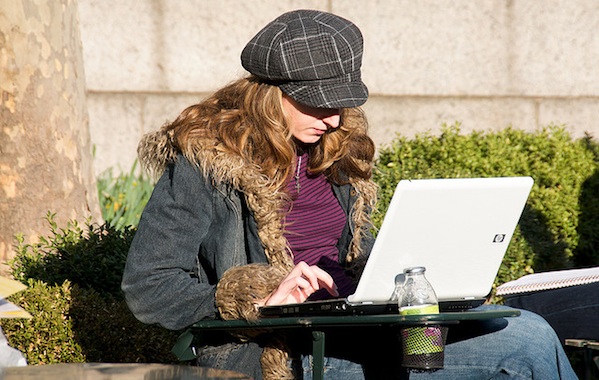 The massive adoption of digital media in the everyday life of teens has reshaped social and educational practices in Latin America. A digital divide persists but youth are increasingly more connected. In Chile, for example, more than 96 percent of all students have Internet access. In Brazil, almost 80 percent of the population between 16 and 24 years and almost 70 percent of those aged 10 to 15 accessed the Internet in 2009. With that kind of penetration, digital media is creating new ways to understand literacy, learning, reading, and especially, writing. Far from hurting the writing practices for youth, digital media seems to be creating a far more complex and compelling space for them to flourish.

Because teenagers are now more connected, the environment for their writing includes the digital realm. These appropriations also create new writing practices, which mix social and informational aspects of communication.

Ilana Elea, a Brazilian researcher who recently finished a thesis on education on PUC/Rio, explains that social media provides a new way of writing: “Teens write while connected,” she says. “Their participation in social networks works as a motor.” For Elea, digital media is reshaping literary practices and creating a far more inviting space to write. She explains that teens write more and more everyday with social networking tools, sharing thoughts, experiences and feelings.

Teens write to be connected to other teens.

Social networking sites have provided teens a place to find others who like the same things they do. Finding others with similar interests has also contributed to the emergence of new writing practices for many Latin American youth: fanfictions and webnovels.  Fanfictions are stories written by fans about something or someone they like, such as Harry Potter, Twilight, Justin Bieber and others.

Camila Monteiro, another researcher who is currently working with fanfictions finds these fictions may be about “the character, the original story or even the person, such as an idol or singer.” Webnovels are fanfictions adapted to a Latin American context. According to Elea, the term, webnovel, is used by Mexican teens to refer to stories whose origins are Mexican soap operas, such as Rebelde (Rebel or Rebellious – RDB). They have a similar structure to television soap operas, where authors publish small chapters of the story a little at a time and the story usually unfolds over the span of six months to a year.

These practices are enchanting teens and youth all around the world. In Brazil, Monteiro’s research has shown that among Justin Bieber fandoms, 51 percent of participants between the ages of 13 and 15 read fanfics and more than 20 percent write them. “Many fandoms, such as Harry Potter’s ‘Potterish’ have a specific (role) for fanfictions,” she explains, “like ‘Floreios e Borrões‘ (Flourish & Blotts in the original book), which has hundreds of stories.”

So, why do so many teens invest their time writing these stories?

Both Elea and Monteiro believe the explanation for the emergence of these new types of writing practices among teens can be traced to the interaction provided by social networking sites. In many of these fanfics/webnovels groups in Orkut, for example, the number of comments writers receive seems to be a huge motivation. Julia, 15, says she writes only if she receives comments.

“When there is no comment, I start a strike,” she says, laughing, “until my fans comment.” Julia is an author of several pieces, and has many fans.  “I never thought much about writing…until I met the community. I enjoy writing for them.” In fact, many of these writers have legions of fans who comment daily (and whose stories, sometimes, attract more than five thousand comments).

Beyond their motivational value, comments can influence the stories themselves. “One key difference between these new practices and traditional ones is the interaction among writer/readers.  Since the stories are developed bit by bit, the feedback from readers can shape the author’s thinking and storytelling, says Monteiro.

The authors’ interaction and engagement with readers also contributes to the popularity of the stories.

With social networking sites, even if a teen wants to write something original, it is possible to find communities who will help them create and write. “Nossos Romances Adolescentes” (Our Teenage Novels) in Orkut is a digital community focused on promoting novels written by their members. With more than five thousand members, it features numerous stories, all commented on and celebrated by readers and other authors.

Many teens invest lots of time writing these stories — often using pseudonymns — that are shared with other fans. They don’t invest near as much time in writing school assignments. Why?

Some young authors don’t want others who know them personally to know they write at all. Some are shy. Others are reluctant to acknowledge they are fans of celebrities like Justin Bieber. “My friends would kill me if they knew. But I’m a fan, what can I do?” says Marco, 17.

Others have different reasons:

“My mother would kill me if she found out about the novels I write. Thus, I have another name in the Internet,” explains Maria, 16. “Nobody knows I’m famous on the Internet, but even so, it is a lot of fun.” Maria writes “Shippers.” In “Shippers,” writers focus on romance between two major characters/idols, sometimes with sexual content. Although Maria doesn’t incorporate much sex in her fictions, she says sex makes them more popular. “But it is also about romance,” she says.

However, school is a completely different type of setting for writing. “School is boring,” says Julia. “No one comments on what I write.”

This is precisely what Elea has found in her research. She says teens want recognition and interaction for their work. School papers receive no comments other than from their instructors. For youth, this is frustrating and de-motivating. School assignments are no match for the writing environment in the digital realm, Elea says. Teen authors “like to feel involved with their readers, to see their work commented on. Schools fail to provide this feedback,” Elea says.

Writing these novels demands time, commitment and patience. Fans expect authors to meet their expectations and, in return, to make the stories become hot topics on the Web. Digital media provides interactive, fast word of mouth and quick feedback for these young authors.

Schools and educators must learn how to appropriate these new practices and tap into their capacity to motivate students.

Note: The names of all teenagers quoted for this post were changed to protect their identities.