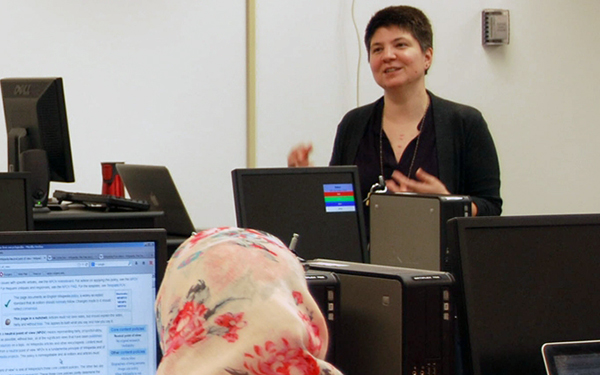 As part of our continuing series that profiles members involved with the Center for Solutions to Online Violence, which was the recipient of funding from the Digital Media and Learning Trust Challenge, we interviewed Elaine Zundl of Rutgers University.

“When we started on the project,” Zundl explained, “I was working at Douglass Residential College as assistant dean and director of a program for women in science called the Douglass Project.” At Douglass, she described how she often “heard first-hand from students about maker spaces or labs where they were harassed or treated badly.” She discovered that female students were similarly “treated badly in university forums,” and felt marginalized at popular tech events like HACKRU. The CSOV project was attractive to her as a way to “spread the word about resources” and change a situation in which she felt “so clueless about where to send them and what to do.”

Zundl has been following the public debate about so-called “safe spaces” in college environments and characterized her own feelings as complicated. “It depends on what standpoint I am speaking from. As a teacher, I don’t believe the classroom should be a safe space where people are never uncomfortable or challenged. I want the classroom to be a real place of growth and learning and development.” However, she also admitted that this more “abstract answer” didn’t always address “the reality of the university environment,” where “it has been getting more and more challenging to keep dialogue open.” She explained that during her time working at a women’s college where she created programs with a mission to supporting women’s leadership and providing a safe space for women of diverse backgrounds.” Under Zundl’s direction the Douglass Project developed two new learning communities, one for women in engineering and another in computing, that functioned as safe spaces. However, she lamented the fact that these efforts “don’t go far enough,” Zundl pointed out the risks of making pledges that can’t be fulfilled in a hostile world: “Ultimately, we know many women that enter the engineering and computing workforce are likely to leave. More needs to be done to ensure that the institutions deal with bullying and misogyny to be more favorable to women.”

As the research director for the Center for Women and Work, Zundl has found that digital participation often is more fulfilling for women after graduation. “When we study women in the workforce, we’ve seen women utilize the mentoring groups and online environments to communicate about their experiences with bias.” Zundl interacts with many women in the corporate world through the Center for Women and Work’s leadership programs for early career women. She insists that online spaces are critical in large sprawling organizations where women are isolated in different company sectors “because they can communicate with each other, vent, and strategize in online spaces. In the university setting, women can have the opposite experience and perceive these spaces as potential sites for bullying.”

Zundl has also spent a lot of time thinking about diversity in STEM fields and how the pipeline to college is often failing at the K-12 level, as well as when students show up in the dorms. “If students come from under-resourced high schools or don’t have family members in STEM careers or have never participated in a pre-college STEM program, they find themselves behind; they find it difficult to catch up.” Without prior mentoring, such students struggle, even if they have interests in or enthusiasm for science and technology.

“There is a huge population of young people who are really interested and hungry, especially in computing. There are a lot of free resources that they can experiment with.” But, Zundl described these students as “in limbo on the Internet,” where they are “doing this work in isolation.” She argued that more attention needs to be paid to “how spaces need to be designed because participants have to feel comfortable there, to experiment and play and have an enjoyable experience.” Zundl found that often it was “students with family support and mentors who spend a lot of time online with free coding materials. More needs to be done with these spaces to ensure that they are accessible to a more diverse group of students.”

Although Zundl described herself as “not formally trained in universal design,” a technique that emerged from early studies of disability, she noted the value of assuming “an equity mindset or an equity focus” to “approaching curriculum and the pedagogical environment to account for “differing experiences and perspectives.” As researchers at the Center for Women and Work, Zundl along with Terri Boyer and Glenda Gracia-Rivera have developed a program called PREP: Program for Research Based Equity Practices that uses assessment data at high schools, community colleges, and universities to identify barriers to student success. She suggested that “rather than focusing on the students and their perceived deficits, we need to focus on our own deficits as educators.” She argued that the design of the CSOV website adopts this equity frame by ensuring that the audience can quickly identify the resources they are looking for.”

“When I worked at Douglass, we spent a lot of time creating learning communities and environments for women in STEM trying to construct informal networks and locate mentoring.” Zundl recently co-authored an article about undergraduate women’s experiences in STEM with her colleagues at the Center for Women and Work. Reflecting on her experience directing these programs, Zundl said, “I don’t feel that this work goes far enough. I don’t think it addresses the root cause of these issues. I cringe whenever I hear ‘we have to get more women interested’ or ‘we need to get more students engaged.’ There are lots of students who are interested and engaged, but they need better resources to thrive and see their future in a STEM field.” Zundl argues that the informal learning paradigm “often lacks a critical framework” in contrast to her current work that “has more of an institutional focus.”

As a long-term member of FemTechNet in a collective of scholars working on feminism and technology, Zundl has been heavily involved in the operations group of the organization. “I like it because it addresses questions like ‘how do we get our message out there’ and ‘how do we form networks and bring our community together’ and ‘how do we sustain this.’” She described “seeing it morph from its first iterations, which were very structured, with everyone trying to do similar things. The goal was to get the most instructors engaged and on the same page. Now the network is more open and distributed, about helping people make connections that work for them rather than pre-prescribed templates. We want to offer resources that they can tap into and a network for support.” In focusing on facilitating making people “feel welcome,” Zundl strives to create communities that are “bigger, more interesting, and more diverse.”