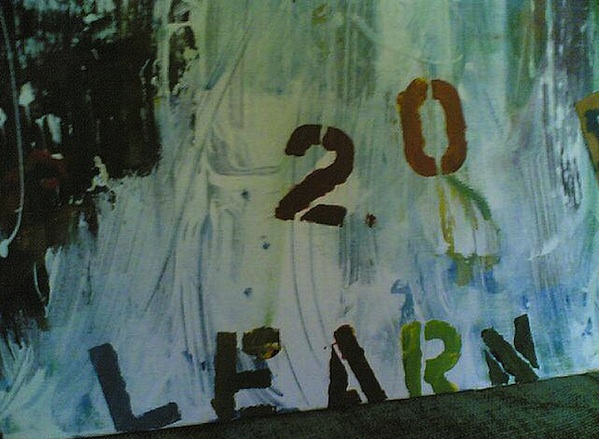 Rheingold U, my current experiment in cultivating wholly online, multimedia, unaccredited, for-not-much-pay learning communities, grew out of a desire to follow the fun and act on impulse. When I impulsively tweeted  a couple of weeks ago, “Anyone willing to pay $100 for five-week Intro to Mind Amplifiers course?” I was long-practiced in the art of riding the waves of personal impulse. In fact, the most productive learning trails I’ve followed or blazed in life started with singular impulses that fulfill life-long interests but were triggered by superficial, even accidental proximate causes.

I started thinking about computers as mind amplifiers 30 years ago when I read that within an hour’s drive of my house in the San Francisco Bay Area was a building full of people who could type words on screens and move words around by pointing at them with something called a mouse. The reports of computer-aided writing machines were the proximate cause of my initial inquiry into digital media. After ten years of manual typewriters, I hated the prospect of retyping an entire page to change the position of a sentence or a paragraph. I had been interested in using electronic technology to extend the human mind for some time – I had written an undergraduate thesis at Reed College in 1968 about the implications of Joe Kamiya’s research into brainwaves and meditation. I had not been interested in computers until I sensed that they were morphing from calculating devices into thinking tools.

“The Paper That Changed My Life”

Looking for a better typewriter in 1983 led me to computer scientist Bob Taylor at Xerox Palo Alto Research Center (PARC) and he introduced me to computer pioneer Doug Engelbart. I realized as soon as I stepped foot in PARC’s glass and concrete neo-Pueblo on Coyote Hill Road that personal computers weren’t just improved typewriters but were beginning to turn into mind amplifiers. “Augmenting Human Intellect,” Engelbart called it, in the paper that changed my life. The whole story ended up in my 1985 book Tools For Thought (online since 1994 – the end of the era when publishers didn’t try to grab digital rights). Now, along with courses I’ve taught, teaching videos I’ve created, blog posts I’ve written, my 1985 book is a text for Rheingold U.

A similarly fun-pulsive process led me to start writing about cyberculture in the 1980s. To research the last chapter of Tools for Thought, I bought a 1200 bit-per-second modem for $500 and connected it to my IBM XT with 128 Kilobytes of RAM and a five megabyte hard disk that I figured would fulfill my storage needs for another decade. I connected it to an impact printer that sounded like a machine-gun. The whole rig costs me $5000, requiring me to take out my first bank loan. I was a writer, and not getting into hock in 1983 to buy a word processor was like insisting on staying in my buggy when automobiles came along.

I didn’t know at the beginning that I would spend the rest of my life playing with digital media, learning and thinking about what digital media meant, and using digital media to communicate what I had learned. I just knew that this was like an electric typewriter for my mind. Then I plugged my phone line into the modem, the modem into the PC and I got sucked into the world of BBSs and then, The Well. I started writing about my experiences online to justify all the fun I was having hanging out online. I had no idea that eventually professors of cyberculture studies would cite my reports from the land of too much online fun, circa 1985. I was just trying to pay the rent by describing how exhilarating it felt to communicate with people all over the world through computer. My book The Virtual Community came out in 1993.

The Birth of Rheingold U…

Flash forward to a couple of weeks ago when, while trying to finish a new book, I realized I needed some cash flow but didn’t want to get on planes for speaking engagements. Offering an online course seemed like something I could do without denting my writing time. All the parts were at hand. It seemed like everything I had done since I visited PARC fit into the course. It took me less than an hour to adapt work I had already created to build a syllabus. I set up forums in the Social Media Classroom for group discussions about how the course was conducted and about the implications of the texts. I made an example blog post, reflecting on the differences between the group voice of the forum and the individual, reflective voice of the blogs.

…And A New Community of Co-Learners

The first of many helpful people I had not known before, a teacher in Ireland who followed me on Twitter, introduced me to Joe Garde, who makes multimedia online meeting rooms available at reasonable prices I still couldn’t afford. Joe not only provided a free space for me to conduct the first live sessions but spent an hour showing me how to work it. Then a couple of educators I know from Twitter showed me Elluminate. I immediately started spending more than I could afford to hold multimedia office hours and lecture remotely. Along with the asynchronous discussions in the forums and blogs and the wiki work, I planned to conduct five live sessions in which I could stream video and audio, push slides, screen-share, while students could communicate with me and each other via text chat and audio.

With my media and curriculum in place in a couple of hours, I took another hour and sketched out the first ideas for nine more courses I could teach.

I have unique experiential and theoretical knowledge about a few subjects and I know from my six years teaching at UC Berkeley and Stanford that students can learn from each other and from me more effectively – and have a lot more fun taking notes on lectures and answering questions about the texts – if we explicitly agree from the outset on a commitment to collaborative inquiry. I explained my teaching goals and methodology. I told them how to pay me, registered them for participation in the online classroom (the annotated list of links to texts and my blog are open to the world, as are the recordings of live sessions, but participation in the live sessions and the forum discussions are private and each student has the choice of making each blog post public or private). I scheduled two live sessions, one in the morning and one in the evening because the first student cohort came from all around the world, to explain how the course would work and to answer questions and to frame the discussions to come about the first week’s readings.

Then the fantasy started coming to life. At the time of this writing, the first session is at the end of its second week, and it is wildly successful in terms of richness of co-learning. It’s a little like love when a group of strangers come together online and enthusiastically enrich each other’s learning…

Howard will occasionally share his new DIYU community experiences in the months ahead.