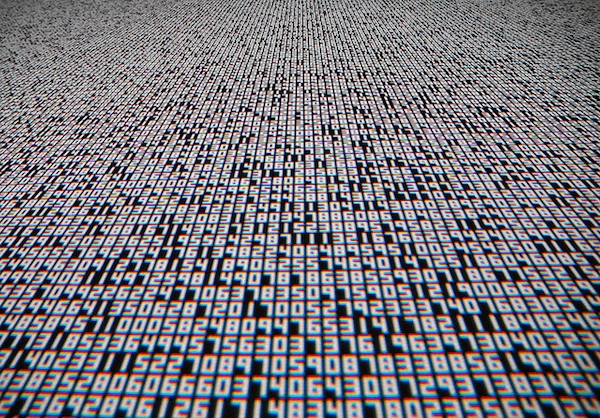 Digital media allow us to produce, collect, organise and interpret more data about our lives than ever before. Our every digital interaction contributes to vast databases of information that index our behaviour from online movie choices to mapping networks of connections across Twitter. In an age of uncertainty, big data sets promise to provide an objective lens through which to understand the world, and both individuals and institutions like schools are turning to data to drive analysis and action. But what does this increasing datafication mean for how we understand the world, and how we understand learning?

Data can be reassuring. In an uncertain world, verifiable data can provide us with solid facts on which to ground our understanding of what is going on in order to guide our decisions. But while data makes some things apparent and more visible to us, we also need to be aware of what is not visible through this datafication. Of course, any analysis is only as good as the data that feeds into it. Choices about which data to collect tend to favour more easily quantifiable elements, which makes it easy to overlook more elusive or intangible aspects – a point which is often used to argue against measuring the quality of learning only in terms of grades.

But our interpretation of data is also skewed by how that data is represented. Raw data in the form of endless numbers tends to be pretty uninspiring stuff, and difficult for the average person to make sense of. There is public demand for access to and transparency of data, but not the equivalent literacies to read and interpret it. This explains the popularity of infographics that use visual design to distill complex data into more immediately appealing and readable representations. Just as journalists and film-makers make decisions about what details to include in a story or how to film a scene, infographic designers make decisions about which elements and connections of a dataset to highlight. Even the most basic of data representations tends to influence our interpretations. My local school reports each term on students’ attainment and their progress since the previous term. Slow progress is coloured red, which focuses scrutiny and improvement efforts on those student groups and subjects where progress is slow even when their absolute level of achievement is pretty high at the expense of those where progress is better but achievement still low. As Laura Noren points out, while most of us learn something about how writing achieves its effects through learning to write ourselves, very few of us learn to create or critique visual representations of numerical information. The particular interpretations of data offered to us through graphic design are thereby very difficult for most of us to critique – as is also illustrated by the graphical representations of data used by news media, such as Fox News.

Data Reflects the Past and Drives Future Behaviour

As we engage in online activity, we leave trails of data in our wake that are added to the huge databases held by Facebook, Google and marketing companies. But there is also a growing movement of people tracking and analysing data about themselves. Members of the quantified self movement track all kinds of data about their daily lives – from numbers of miles run over a year, to sleep patterns, to symptoms of long term illnesses. The resulting data is not used just to develop greater awareness of behaviour patterns, but to gain more control over future behaviour. Data is used as a motivating tool, with individuals playing games, often competitions with others, to get higher or lower numbers in their personal data. Datafication is thus both backward-facing, representing what has happened so far, and also forward-facing, driving future behaviour.

Yet the way that datafication informs future action is not always straightforward. In schools, backward-facing data about student achievement is used as an accountability measure, for school inspectors, parents and the public. The same data is also used to inform school improvement plans – to help teachers understand which groups of students are struggling and which are succeeding, which topics they have grasped and which they are finding more difficult. Yet using data to report on previous performance can come into conflict with using it to inform future activity. There are pressures for schools to put the most positive spin possible on data when it is being used for accountability – but to use data for improvement means strongly interrogating and reflecting on the data to understand what is really going on.

The insistence on transparency of data can also come to be seen as an end in itself. One school I worked with developed an online system for visualising data for pupils, parents, teachers and school managers. Yet the power of the technology to create a beautiful representation of complex data actually distracted from the question of how this data should be interpreted and acted upon. Beautiful data can be seductive, giving the illusion that if we only have enough information we will be able to make the right decisions. But exactly what parents should do if they know their child is a superstar in Science but failed a spelling test, or exactly what strategies teachers might adopt as a result of knowing that a third of their class struggle with fractions are questions to which data cannot supply the answers. While providing an illusion of certainty and control, the data itself only provides a starting point for asking more questions.

Facebook is a prime example of how datafication attempts to influence our behaviour. By displaying numbers of ‘likes’, ‘comments’, ‘shares’ and ‘friends’, Facebook encourages its users to spend more time on the site creating and sharing content that will increase those numbers – and provide more valuable data about ourselves that makes it easier for marketers to effectively target us with advertisements. In an attempt to reveal how this quantification of behaviour influences our online behaviour, Ben Grosser has produced the Facebook Demetricator – a browser add-on which strips out the numbers from Facebook. Rather than notifications reading ‘7 people like this’ users simply see ‘people like this’; rather than ‘267 friends’ it just displays ‘friends’. Grosser hopes to show users how the designed-in quantification drives some behaviours and not others – and invites users to question why Facebook has chosen to make visible some data and not others. It could, as Grosser points out, tell us how many hours per week we have spent on the site or how many promoted stories we have clicked on – but this might drive less, rather than more, time spent on the site.

The use of data to drive online behaviour does not stop at Facebook. By using cookies to track interaction across multiple sites, and then aggregating this information, marketers get an even more accurate and nuanced picture of who you are and therefore the advertisements you are more likely to respond to. Collusion provides a great visualisation of this behind-the-scenes datafication.

The effects of datafication also arguably extend to our offline behaviour and influence how we see ourselves and the world around us. If numbers of friends, likes and comments are what drives our interaction online, particular attitudes and perspectives are being cultivated that we may carry offline. Different sites collect and reflect back to us different kinds of data about our identities. But the kinds of data that are collected and how they are represented make some identities more possible than others. For example, Facebook is rumoured to be developing a ‘want’ button, encouraging the presentation of an identity shaped by consumer desire. The kinds of data that feed into these data-driven representations present particular kinds of identities to the outside world, but also reflect back and influence how we see ourselves. To take an example from the quantified self movement, tracking illness symptoms can lead people to view themselves as ‘an unwell person’. Similarly, if pervasive visualisations of achievement data are the main way that students’ school identities are presented to their teachers and themselves, they will learn to see themselves as a ‘slow’ or a ‘bright’ student. Jenny Davis and Nathan Jurgenson describes this simultaneous production and consumption of identity-data as ‘prosumption‘.

None of the data we produce makes sense in and of itself; it needs to be placed in context in a wider narrative to have meaning. For example, monitoring our grades does not show whether progress is ‘good’ unless we compare it with other students or an expected benchmark. If we want to have control over the datafication of our identity, context is all. This is why curation is so important: the selection of some elements and exclusion of others allows a particular story to be told. The way that the logic of data shapes and constructs our understandings, decisions and identities, and the extent to which we have control over this process varies considerably between settings. The question then becomes: who has the power to choose which elements to select in constructing particular tellings of who we are? Within the bounds of Facebook’s architecture, we can use various settings to show and hide different information about ourselves – but it is also possible for our ‘friends’ to add new data, to disaggregate and recombine our data , generating different ‘tellings’ of who we are, or undermining our carefully curated presentations. In schools, the decisions about what data to collect and how to represent it are driven by the institution’s demands for accountability of student performance: students themselves have very little control over what data is collected, how it is contextualised and how it is interpreted.

While datafication may give the illusion of more certainty about ourselves, our world and our learning, it does not in itself provide final answers. If data is to open up opportunities for thinking and acting differently in the future, it can only ever succeed in posing more questions. Dawn Nafus describes this as the “more-and-yet-less” quality of data. Measuring data gives more information, but only succeeds in posing more questions about what data really means. Tracking a student’s progress does not tell us how to better support their learning – and if we are to use the data in any meaningful way at all it drives us to consider what we really mean when we talk about learning and progress.

If we are to avoid having more information but less meaning, and avoid becoming subjects defined by datafication, we need to be able to continually remix our data to take control of our own stories. Given that we are all producing masses of data as a by-product of our digitised interactions, and there is greater capacity for tracking, curating and remixing that data into stories, the possibility exists that we could have greater control over which versions of our identities we present in which contexts. If we could take the data about us and recontextualise it in our own stories we could have more control about how that data was represented and interpreted, placing school grades and Facebook photos alongside other stories and other kinds of data to tell a different kind of narrative. If we were able to continually remix our data so that it was recognised as only a partial picture of who we are, we may be better able to resist the controlling illusion of certainty offered by datafication and create possibilities for data to drive new ways of thinking and acting in the future.