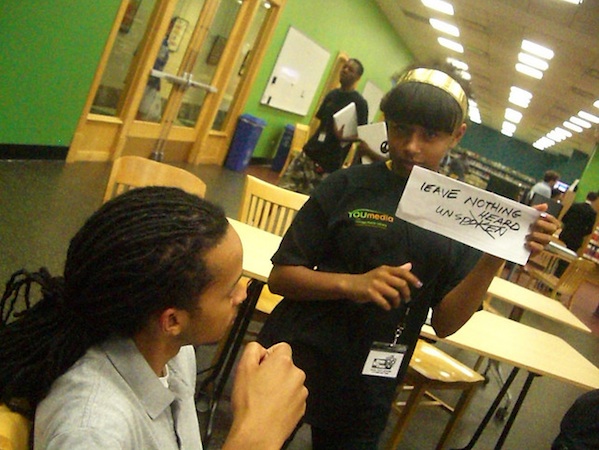 Although “digital literacy” is often a phrase associated with programs that have utopian pedagogical visions, it also can become a term attached to rigid curricular requirements, standardized testing, and models of education that stigmatize some students as remedial when it comes to their basic programming skills or their abilities to use software productively.  Furthermore, the term “digital literacy” can generate conflicts among educators because many different disciplines may claim sole responsibility for providing any needed instruction, as I’ve argued elsewhere.  Computer scientists, media scholars, librarians, composition teachers, and digital arts instructors have all made supposedly exclusive claims to design and assess digital literacy programs in both K-12 and higher education environments.  In contrast, internationally known mixed reality artist Micha Cárdenas calls for an inclusive and interdisciplinary approach to “digital literacy” that is more in keeping with the latest thinking about “digital fluency” in the field.

As a transgender performance and new media artist, Cárdenas is interested in challenging boundaries: between female and male, between human and animal, between fantasy and reality, between virtual and physical, and between person and machine.  She first became known in news reports for spending 365 hours wearing a head-mounted display and operating a motion capture system in order to experience 3-D immersion in one of her online identities, a dragon avatar named Azdel Slade (She has also been lambasted by Fox News for contributing to digital work with repurposed mobile telephones that questions the border between the United States and Mexico). 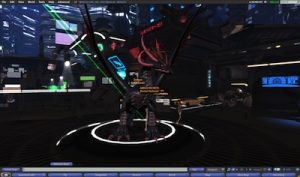 Cárdenas is leaving her position as Associate Director for Art and Technology in the Culture, Art, and Technology Program at Sixth College at U.C. San Diego to join an interdisciplinary Ph.D. program in media arts and practice at USC, but in an e-mail interview for DML Central, she looked back on her positive experiences working collaboratively with faculty from many different departments to promote the college’s digital literacy goals and shared her advice with other digital educators.

“My idea of digital literacy comes very much from my undergraduate education in Computer Science, combined with freedom of communication ethics from media activism and Free/Libre/Open Source Software (FLOSS) movements,” says Cárdenas. “Along the way to my first degree, I realized that the goal was not to learn many programming languages and details about semicolons, but to learn how to learn to use new technologies.”  Although having the ability to write code is important for Cárdenas, she also argues that “digital authoring, networked authoring, and spatial or 3-D literacy” are important for students navigating online environments constituted by popular media sharing hubs, social network sites, or video game worlds.  She credits Holly Willis of the Institute for Multimedia Literacy, who came to Sixth College to lead a faculty workshop, as someone effective at articulating how digital literacy functions “as the ability to understand and manipulate the digital technologies that are shaping the contemporary world, which are increasingly networked technologies.”

Traditionally core curricula emphasize a fixed canon of great books and enduring themes, but the CAT core curriculum has a different paradigm to encourage students to become – as the college’s motto says – more “innovative, interconnected, and aware.”  CAT classes often ask students to do hands-on work that emphasizes their role as potential creators of new knowledge.  For example, CAT students have gone into the university’s special collections archive to do their own detective work with original documents, have done fieldwork in a neighboring community, and have even played assigned videogames or built booths for collaborative written custom graphic novels in their coursework.  Cárdenas describes this as exemplifying “the CAT vision of education that is constantly changing to meet the changing needs of students, from changing technologies and ways of relating to media to changing student populations.”

“My hope for the CAT program is that it can become a Wiki-college,” Cárdenas explains. “This is not to endorse Wikipedia (I might sooner endorse Wikileaks), but to provocatively encourage a more widespread adoption of horizontal teaching and management strategies.”  She cites Paolo Friere as an inspiration for creating “horizontal learning environments in which every student is empowered as both a learner and a teacher.”  Cárdenas notes that “such an environment parallels some Wikis in which every reader can be an editor.”

Although Cárdenas is enthusiastic about teaching with technology and creating a more level field for learning exchanges, she argues that some may be too quick to want to eliminate lectures with live professors in favor of online instruction and individual modular tutorials.  “The performativity of teaching is something that is often downplayed or ignored,” asserts Cárdenas. “I find inspiration in the writing of bell hooks who talks about a holistic approach to teaching that doesn’t ignore that fact that we are people with bodies and feelings and instead seeks to bring an emotional investment into the classroom.”  As a lecturer herself, she wants to keep the focus on a live experience that can’t be easily tuned out.  “I strive in my own teaching, both with large group lectures and small groups to actually connect with students at the emotional level and bring a level of passion and excitement to my scholarship by addressing my own needs and desires as well as theirs.”

Teaching with diversity in mind is also a central concern for Cárdenas, and she insists that digital literacy education should not purport to offer a technocratic and neutral set of values that is divorced from debates about cultural inclusion.  “Sixth College is not trying to do too much by putting the study of technology together with questions of race, class, gender, sexuality and ability. The kind of interdisciplinary or transversal scholarship I do works along these lines, not looking at technology and gender as separate, but seeing how technology is shaped by the same structures that create oppression and how technology in turn creates those structures.”  After all, as Cárdenas observes, education is “the process of learning to cross borders, to transgress, which requires openness and courage from everyone involved.”