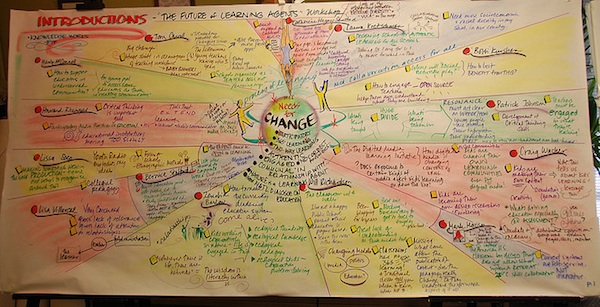 New research findings from a global study of education systems suggest that the promise of a hi-tech, high-skills, high-wage future for kids is a fantasy. Does digital media and learning offer a better future?

It’s always important to remember that the future has a history. Back in 1939 the satirical book The Saber-Tooth Curriculum showed how seemingly radical educational innovations can quickly lose their intended utility and become conservative even while they are justified on the basis of their supposed cultural value. The book explains how the “paleolithic curriculum” of practical skills of “fish-grabbing-with-the-hands,” “horse-clubbing,” and “saber-tooth tiger-scaring-with fire” became abstracted, over hundreds of years, into sacred virtues and generalized agility.  After a cultural struggle amongst stone age academics, however, the saber-tooth curriculum was eventually replaced by “progressive” educators with a more authentic and real-life curriculum relevant for the future—the “real-tiger” method where kids wave genuine fiery clubs at captive tigers.

What might this little satire have to offer educators today? Can education in the digital age learn anything from the stone age? The global consensus about how to transform education systems for a hi-tech future goes back a few decades now. Is the future that it puts forward based on a historical ‘saber-tooth curriculum’ or ‘real-tiger learning’?

Since the 1980s there has been an increasing emphasis on educating individuals who are able to constantly update and upgrade their skills to do well in a competitive new economy which relies on new technologies, new ideas, and perpetual innovations. According to this basic model, smart learners will help rescue a nation at risk at the same time as delivering the middle class dream. Much of the work done on integrating new technology into education over the decades since then has been a variation on this basic simplification. The dream of the future embodied in these efforts  has been of hi-tech, high-skills, high-wage knowledge work.

However, the promise of hi-tech learning leading to high-skills and high-wage knowledge work has now been found to be broken.

That, at least, is the conclusion of the authors of a new book, The Global Auction: The Broken Promise of Education, Jobs and Incomes. The book is based on two decades of research studying the links between the global economy and education. In particular it reports on 200 interviews with corporate executives and national policymakers around the world that explored “the promise of a hi-tech future of highly paid knowledge workers.”

Here’s what the authors say:

Since the 1980s, politicians and opinion leaders, whether Republican or Democrat, continued to present the future economy as a world of smart people doing smart things in smart ways. It is a world of new opportunities for creative talent and prosperity for American workers and families…A vast edifice of policies, programs and initiatives has been introduced to virtually all affluent countries in anticipation of an innovative age of high-skill, high-wage work. [But] much of this money, effort and enterprise will be wasted…Schooled in the belief that “learning equals earning,” many Americans have unrealistic expectations of a world that does not owe them a living.

The problem is not just an American one. It’s a global one. Kids all over the world are being sold the promise that they can fulfil their opportunities and expect a middle class lifestyle. According to the book, here’s why that promise has been broken:

1. An education explosion. There has been an explosion in the supply of highly skilled workers in Western nations but also in emerging economies such as Brazil, Russia, India and China—thus lowering the value of credentials in the competition for jobs

4. War for talent. Companies are focusing on recruiting the next generation of talented employees from global elite universities and by selecting the best and brightest students, leading to greater inequality as companies seek to identify a small cadre of high flyers across the globe

These trends combined are forcing young people into a global auction based on a price competition for expertise: “forcing American students, workers, and families into a bare-knuckle fight for those jobs that continue to offer a good standard of living.” The stark reality facing many young people is that the global market for jobs is congested with well-educated, low-cost workers. The promise of fulfilling “boundaryless careers,” “work-life balance,” and work that “makes a difference” has proven to be false.

The Future: ‘An issue of Youth’

Other writers too have identified this crisis in the educational promise of hi-tech, high-skills and high-wage knowledge work. Christopher Newfield calls it a crisis of the cognitariat where the cultivation of “a small elite of knowledge-based star producers” comes at the expense of the vast majority of highly educated young people who are facing a future as “perma-temps.”  Young people face becoming a jilted generation whose life chances have been bankrupted; an abandoned generation representing a skilled yet “liquid” workforce, who put in long hours but have few rights in the workplace. The assumed demand for armies of brainworkers is false.

Now, of course, the DML field is not just about equipping kids for work. But many arguments put forward about the benefits of learning with digital media are broadly based on the view that possessing creative talent and being able to produce knowledge with ICT are keys to the good life, decent livelihoods and lifestyles. Are some of these assumptions and arguments merely digital equivalents of their old stone age analogues of fish-grabbing and horse-clubbing?

The influential American educator Henry Giroux has spoken passionately about the future as primarily an issue of youth, “who more than any other group embody the projected desires, dreams and commitments of society’s obligations to the future.” In an age when “dreams of the future” are “manufactured in the Pentagon, corporate board rooms, or in Hollywood,” Giroux argues, it is increasingly clear that “the futures we inherit are not of our own making.” But, he says:

the futures we create for generations of young people who follows us arise out of our ability to imagine a better world, recognize our responsibility to others, and define the success of a society to the degree that it can address the needs of coming generations to live in a world in which the obligations of a global democracy and individual responsibility mutually inform each other.

Clearly, the hi-tech, high-skills, high-wage future that has been promised to youth since the 1980s now looks less and less sustainable, besides being ethically dubious in the first place. Like the saber-tooth curriculum, the vision of hi-tech schooling ought to be queried and debated. But is it enough to replace it with a renewed “real-tiger” curriculum? Does the digital media and learning field offer an adequate prospectus for what Giroux calls “a future that needs your skills, critical judgment, sense of responsibility, compassion, imagination, and humility”?

Or is it enough to defer issues about the future? The Saber-Tooth Curriculum proposes that “in order to determine what our curriculum should be, we must first decide what our society should be.” But this radical notion has critics. “Certainly not! That would be the blueprint of a future social order…Only the Great Mystery knows what is going to happen tomorrow. Are you setting yourself up to be the Great Mystery? You will be lucky not to be struck dead for that impiety!”

Anybody fancy a crack at the Great Mystery of digital media and learning?