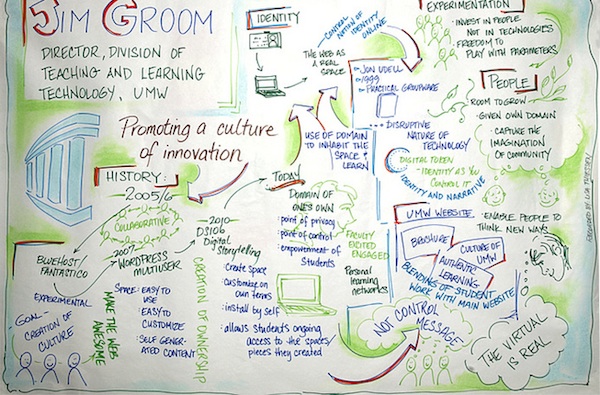 Far more important to me than all the venture-capitalized consortia of elite university MOOCs (Massively Open Online Courses) and the hundreds of thousands of students flocking to them is a course taught by an adjunct professor at University of Mary Washington. In my personal learning network, Jim Groom and ds106 are the stuff of legend. I’ve conducted more than 40 interviews for DMLcentral, and without a doubt, Jim Groom is the most excited and exciting educator I’ve talked to. If I had one wish regarding the way online education will happen in the future, it would be for the work of Groom and his colleagues Alan Levine, Martha Burtis, and Tom Woodward, the architects of ds106, to be as widely known and discussed as the work of Peter Norvig and Sebastian Thrun, the architects of the “100,000 student classroom.” A future in which both approaches thrive is one that could work for me. There isn’t one kind of knowledge. Why should there be one kind of pedagogy?

More important than the use of technology and pedagogy to light students’ enthusiasm, more important than the multimedia literacies they gain, even more important to the charisma and enthusiasm that Groom brings to the enterprise is the deeper philosophy of real autonomous accomplishment in the digital world and self-awareness by each student of the power of their online participation that Groom mentions in our conversation. He insists that students not use a siloed learning management system but, instead, learn to create their own WordPress site and to learn in public, because underlying the multimedia skills that the course is meant to impart is a sense, in Groom’s words, of “What it means to shape their digital identity, what it means to shape who they are online. That’s the secret sauce to this class. We don’t talk about it that much, but I want them to constantly think and reflect upon their creation and their process of creation so that when someone comes to their site, what they see is an amazing curation of a process for thinking, learning, and being as a person in the 21st century.”

Assignments? If students don’t like the existing assignments, there is an online system for creating their own. A space for curating their “Inspiration of the day,” a “daily create” space, a radio and a television station all emerged from the students’ own initiatives.

When we talked about fostering an online learning community that connected face to face classrooms, current online students, and even former online and face to face students who continue to hang out and mentor each other, Groom declared that Twitter was centrally important in creating an informal space, outside the boundaries of assignments and grades, for the all-important trivial banter that turns a cohort of classmates into a learning community: “Twitter became the platform for everything that is missing in online learning – that hallway space, the space where you are joking around, the interstitial spaces that aren’t tested on and aren’t assessed – but it’s where all the learning happens. I don’t care if it’s Twitter or Google Plus – you create your own tool – but being in a space where you feel you can invite and engage a community is very important.”

This interview is longer than most of my videos, but I challenge anyone who is interested in the future of education to turn away from it after you watch Jim Groom get started: