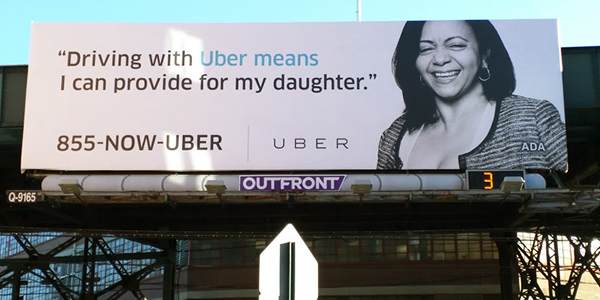 Every day that I arrive to and leave from work, I’m greeted by an Uber billboard. The photograph shows a women of color, probably in her 30s squinting as she looks at the camera. The accompanying text says, “Driving with Uber means I can provide for my daughter.” The “Uber means” text is in blue. This billboard replaced a previous Uber billboard that simply featured a car and said “Drive with Uber.”

There is an obvious link between the existence of these billboards and education as they were placed directly outside of a community college. There is another connection to Uber and education as well, though. They are supporting education in innovation. Uber has done this by partnering with the University of Maryland. In September, they also announced that they would be partnering with HackingEDU. The first HackingEDU hackathon since the formation of the Uber/HackingEDU partnership will be taking place later this month in San Mateo, California.

The existence of the newer Uber billboard, targeting mothers who are trying to make a better life for themselves by attending community college, stands in contrast to the type of innovation for education they are imagining by accessing and supporting people able to make it to Silicon Valley for an Education Hackathon. Both represent the types of innovation Uber imagines for different populations. The populations are divided by the design of their outreach, narratives, and opportunities that are offered to them. The billboard and the hackathon are the ideal use case the company imagines for the learner as an end user of their product.

Many students at the community college where I work do need jobs with flexible schedules to support themselves and their families. But, this need does not prevent them from having something to contribute to the hacking education conversation. Especially for early projects still in the design and prototyping phase. With two-year institutions graduating only 29% of first-time degree seeking students within 3 years, it is a space where simply by attempting to get an education, students are already hacking a system that was set up without their success in mind.

As the use of digital media and technology in education continues to evolve, Uber is one of many companies that see “innovation” as a space that will continue to recreate social inequalities by design.

In related events, I recently attended the New York City media lab summit, an event that was focused on media disruption. Many projects, lots of them from students at well-funded institutions, were on display. They were inspiring, and interesting, but not accessible in a way that allows the students to both reach up into their dream careers. The projects did not reach out to a wider audience than those who have the tools to be fluent in the intricacies of their creations, something that makes sense for student projects. The industry professionals spoke in the same manner. However, instead of “innovation,” the term of the day was “disruption” (something that was visible in the twitter activity).

There are populations that are imagined as too disrupted to be involved in the organized disruption of technological innovation people are hoping for both outside and inside of the education industries. And, the populations that are imagined this way are often already marginalized by society. The technology innovation and disruption movement sees students from a specific type of education, one that tends to have a large endowment and reputation for successful product launches, as being the people from whom the next big idea might come from. Education is also a potential future client both because the peers of the idea generator will be fellow students, and because educational institutions are invested in their students being successful, and technology is a tool that can help.

Technological innovation, and the directions we as a society move it in and fund, contain our dreams for the future. We see this mirrored in films such as the Social Network, the two biopics on Steve Jobs, and the Silicon Valley TV show. When we think of what the successful technological innovation and disruption is, it tends to follow a go big or go home model. There is a continual search for the bit that might be the “one more thing” rather than taking a longer term look at the bigger social system that inevitably gets reproduced. As digital innovation labs and technology companies continue to become more intertwined with the educational landscape, it is important to remember that only “59 percent of students who began seeking a bachelor’s degree at a four-year institution in fall 2007 completed that degree within six years,” according to the National Center for Education Statistics.

We cannot just hack learning tasks. We need to hack how education is imagined. A big part of this is bringing people, who see the billboards asking them to do microwork after school, invited to, and given the means to participate and be heard at well-funded hackathons, too.