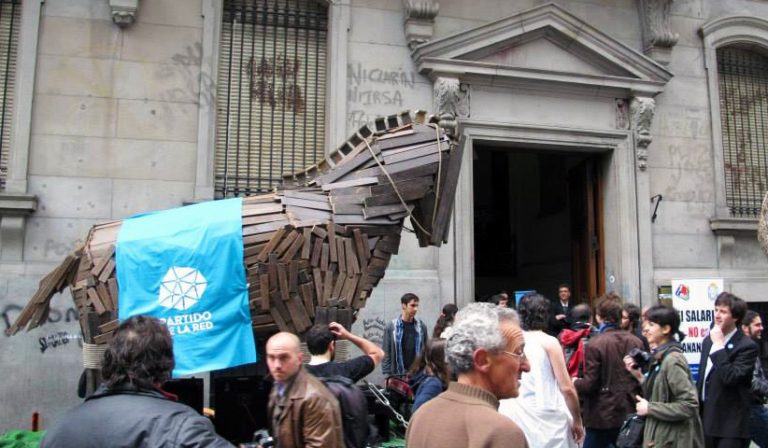 I’ve written before about civic education initiatives intended to help model systems of political deliberation in the United States, but with my first trip to Latin America in April for the Humanities, Arts, Science and Technology Alliance and Collaboratory (HASTAC) conference, I wanted to learn more about efforts underway in countries south of the equator.

Pia Mancini sat down with DML Central for an interview about the Net Democracy foundation, which is intended to “innovate in the political system” in response to a perceived “crisis of representation” in which communities of young people fall prey to silence, apathy, and disengagement. Although she acknowledges the importance of “noise in the street,” she asked how technology could be used “to build a bridge” between political systems and constituents or — to use the language of software development — “upgrading our representative system of government.”

Mancini is part of a group that ultimately designed Democracyos.org, an open source platform intended to be app-friendly for smart phone users, which — according to Mancini — was “designed in the most simple way for collective organizations” to be usable at a variety of scales from “parliaments to student groups.” Rather than provide “just another civil society” effort, she asserted that the goal was to help young people “get informed, debate, and vote” and stimulate discussion about “how you want your representation.”

In considering how political life depends on action by proxy, her group asks “what can we can do to close that gap?” When queried about technical specifics, she explained that “the system has an offline component” as well.

Currently, the software is in use in three different national contexts. In Argentina, where Mancini is based, the Net Party (or “Partido de la Red”) promises to use software as a “Trojan horse” to “open the doors of the legislature” in  Buenos Aires. Said Mancini: “we’ve hacked the system, run for elections, and formed political parties to take decisions in different ways.”

In Mexico, working with the office of the president, datos.gob.mx is used to effect coordination of digital strategy and “allow for citizen debate and an open data policy.” And, in the tumultuous post-Arab Spring political environment in Tunis, the software helped an NGO facilitate peaceful participation in constitutional debate in January.

Mancini describes her organization’s approach as an “opportunistic exploit” in which “it happens today, but you don’t see it,” despite the fact that its “actions are transparent and evident.”  She observed that “our challenge is not technological; our challenge is about how we build better citizens, and open up these spaces” to expose “people who try to game the system.”

Although her group may use platforms such as Facebook or YouTube to get the word out, she cautions cyberutopians about “the limits of commercial systems” that lack transparency, because most are not open source. “There’s a big issue with who owns the information and data. In this situation, why trust the system?” Somewhat controversially, she explained that “all actions in the platform, including voting, need to be public.” Although she ceded that some “anonymity for debating” might be laudatory, she worried that too much cloaking of participants’ identities could undermine “the reliability of the system,” including “showing that you lose” in certain cases.

With the long-term legacies of human rights abuses in Latin America and corruption encouraged by drug cartels and drug problems, she said that “witness and press protection in Mexico” were particularly crucial. “We are doing something different — bringing back public debate as a core part of our democracy; maybe in 20 years time, our people will have learned to be responsible citizens. So, not hiding behind an avatar makes us think twice. We are trying to foster very conscious decisions.”

“We’ve organized hackathons for the technical side of things, working closely with the Net Party here in Buenos Aires, which is a political party,” Mancini said. She was trained as a political scientist. “I always come from a civil society background” with think tanks and NGOs. “Then, I took a leap of faith as a  campaign manager. I had always worked from the outside before. I didn’t like what I was seeing. The leadership was systematically unjust and elitist, and seeking justice was very costly, with the language of system intended to be for lawyers to lawyers. Although voters can only make a decision every two to four years, we saw that there was a possibility to innovate in the political system.”