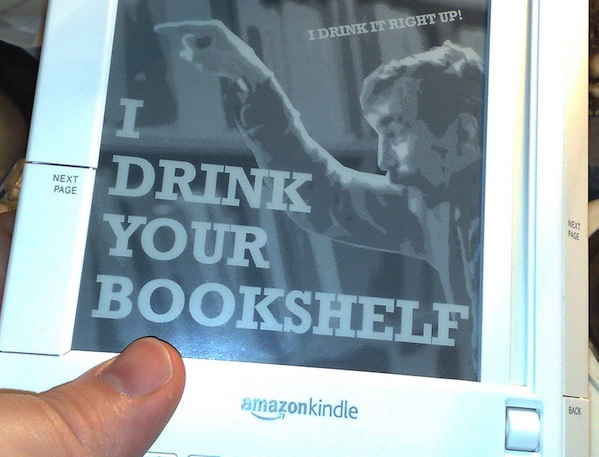 In my last post, I argued that an alternative to the Web 2.0 vision of the Internet—one where individuals “create value” for the corporations that run online networks—are the decentralized networks of the Occupy movement.

Perhaps the clearest outline of the Web 2.0 philosophy applied to the Web is in Zittrain’s The Future of the Internet: And How to Stop It, in which he describes how the trend of Web development has been to limit the Internet’s traditional openness, that of any device being connected to the network and the ability to transfer any type of file without restrictions on that file’s content, is replaced by corporate control. Where the Internet’s original protocols were designed to serve a range of devices and media, recent moves by media companies have created private networks, based on closed, proprietary devices, that limit their functionality and openness to development.

The current state of eBooks offers an example of this approach in action. While reading electronic books is becoming increasingly popular, this popularity has come with a cost. Where traditional paper books are a perfect example of open media—when I buy a paperback, it is mine; I can loan it to whoever I want, mark up its pages, resell it when I no longer want it—many commercial eBooks are created in closed formats and come loaded with restrictions on their use. The most popular platforms for reading eBooks are dominated by a few players—Amazon, Apple, Google, and Barnes&Noble—and those players have a spotty record related to privacy, as the EFF has documented. This is especially worrisome in the push for electronic textbooks, as it can be unclear when eBook software is spying on students. In short, while eBooks offer tremendous promise for interactivity and multimedia development, they are in danger of being Web 2.0-ed to the point that their open, participatory nature becomes unrecognizable.

Yet, this isn’t how eBooks have to be. By combining the tactics Henry Jenkins identifies in the Occupy movement with the insights of Zittrain, we can imagine alternatives to this state of affairs. As I quoted Jenkins in my last post, the Occupy movement offers an example of how to utilize commercial networks without being defined by them. The movement makes use of many different media networks, ensuring both that no one network gatekeeper controls their message and that they reach a broad audience. While such a strategy may make use of networks like Twitter or Facebook, it ensures that Occupy is not a Twitter or Facebook movement. Rather, it is a network movement. In that spirit, rather than creating a book in Apple’s proprietary .iBooks format, content creators can create books in the open EPUB format, which can be read by most major readers along with a number of free and open source solutions. This type of development allows for an Occupy-style approach: rather than presenting work in one proprietary store, books can be shared in multiple venues so as to not be subject to the restrictions of any one gatekeeper. Doing so allows content creators to make use of robust communication networks that are not dependent on the closed silos of Web 2.0-style walled gardens.