Tashawna is a high school senior in Brooklyn, NY. In the morning she leaves home for school listening to MP3s, texting her friends about meeting up after school at Global Kids, where she participates in a theater program, or FIERCE, the community center for LGBT youth. On the weekend she’ll go to church and, on any given day, visit MySpace and Facebook as often as she can. While she misses television and movies, she says she just can’t find the time.

This describes what I call Tashawna’s distributed learning network, the most important places in her life where learning occurs. Not just at home, school and church but also through digital media, like MP3s, SMS and social networks, and at youth-serving institutions, like Global Kids and FIERCE. Some are places that require her presence, like school, while others are interest-driven, like MySpace. But the learning she gathers across the nodes in her network are preparing her to succeed in the classrooms, workplaces, and civic arenas of the 21st Century.

Tashawna is not alone. In part due to changes in education, in part due to the effects of digital media, youth have a wide array of options for learning and skill development. But how many youth feel in charge of their networks, or are aware they exist as an interconnected whole? How do they learn to synthesize what they learn and communicate it to future employers and college admission staff who won’t learn of their strengths on most school transcripts?

Global Kids, an after school program in New York City that supports youth like Tashawna to be global citizens and community leaders, has begun to explore these questions. More specifically, we are asking: What do youth need to understand and navigate their distributed learning networks? And how can youth-serving institutions support youth to document the associated learning that addresses 21st Century Skills?

While digital media has been a disruptive force in the fragmentation of learning environments, it remains a source for coordinating and synthesizing the experience. One approach to empowering youth to be in charge of their learning and make sense of their distributed learning network is to focus on youth’s existing assets through both digital tools and offline activities to help them see the contours of their networks, understand their role as they traverse their learning nodes, and enhance their abilities to make connections.

I was able above to describe Tashawna’s distributed learning network because she showed it to me, on paper. It looked like this: 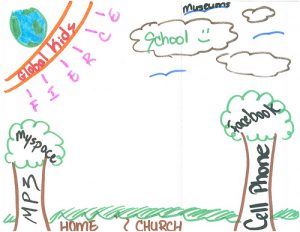 Actually, this was her second drawing. She didn’t like her first because she was concerned it wasn’t original. The first one looked like this:

When I first viewed these I paid attention to how she chose to group certain nodes. I noticed the distinctions between informal learning institutions and the formal, between portable digital media and online. I had to push her, however, to list all of her portable media devices, web sites and after school programs. She wasn’t used to thinking about them as sites of learning.

I hope she began to think, perhaps for the first time, about herself as a participant within her network, as the final source creating meaning by synthesizing the collected learning, and as the one ultimately responsible for learning how to best design and navigate her network, now and in the future. 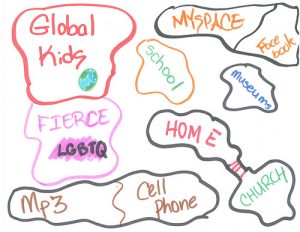 Even if Tashawna could fully articulate the learning she receives outside of  standard school curriculum, how can she communicate it to others, in a capacity more formal than a college essay? Last year, we worked with Henry Jenkins’ Project New Media Literacies to create something which might do just that: a Digital Literacy Transcript.

Henry Jenkins has identified and described the core literacies afforded by new media tools that are essential for full participation in our new digital age, such as Simulation, Negotiation, and Multitasking. Last year, Global Kids developed and implemented a curriculum that used social media to sharpen their literacies while assisting youth to understand how to think about them.

Below is a copy of the printed version of Tashawna’s year-end transcript: 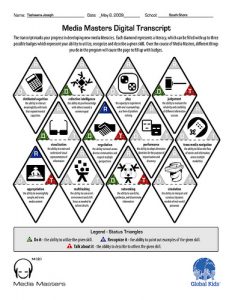 The transcript turns each literacy into a triangle-shaped badge. Each corner represents a different relationship with the literacy: I can recognize it, I can talk about it, and I can do it. At the beginning of our program each youth’s transcript was blank. Over the course of the program youth watched their transcript grow as they earned badges by completing social media projects in the program while also submitting existing work (fan fiction, podcasts, etc.) that demonstrated evidence of their existing competencies. For example, you might note that Tashawna completed her “negotiation” badge, was working on her “networking” badge, and never began “performance.”

The transcript served as both a feedback mechanism to motivate and guide learning and an alternative transcript to show colleges or prospective employers about abilities which would otherwise go unrecognized.

Digital Literacy Portfolio
How could a college or potential employer viewing Tashawna’s Digital Literacy Transcript know that she actually learned the referenced skills? And for those new to the terms – which, to be frank, are most of us – what could she do to make these concepts clear and concrete? Enter the Digital Media Portfolio.

Each portfolio is personally curated by youth like Tashawna to offer an audio and visual tour of their social media productions that highlights the literacies developed through each social media project. This stands in contrast to the Digital Transcript, which is official and controlled by Global Kids.

Global Kids is new to these three approaches – Distributed Learning Maps, Digital Literacy Transcripts and Digital Literacy Portfolios – but this year will expand them in a variety of contexts. The new MacArthur Foundation-funded Edge Project will allow us, as part of a broader initiative, to bring the Learning Maps into civic and cultural institutions that use digital media for learning. Meanwhile, the transcripts and portofolios will be rolled out in Winter 2010 within the New York City Public Library. Over the course of the next two years we will be documenting this work and sharing our findings with the broader community.