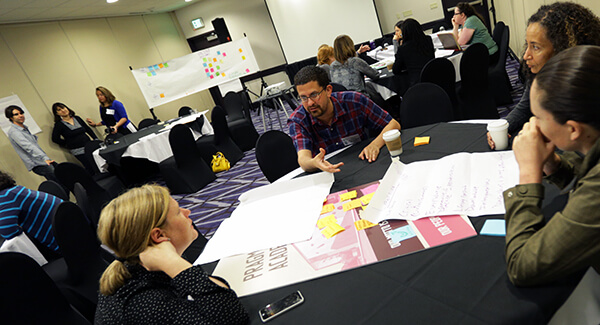 As a former high school English teacher in two large, urban school districts, I completely understand how educators, parents and policymakers who are wrestling each day with the most pressing issues facing public education — standardized testing, the effects of poverty on learning, opportunity gaps — might be a bit impatient with educational theory and research. Is this new theory about the intersection of culture, politics, and digital media going to give me the answers about how to help my most struggling students today? If not, it can wait. My students need me right now.

So, I can chuckle for a moment along with Dr. Frederick Hess, director of education policy studies at the American Enterprise Institute, when he pokes fun at some of the paper titles that were presented earlier this month at the 2016 annual meeting of the American Educational Research Association (AERA), the largest professional organization of education researchers in North America. The titles he singles out are often extremely lengthy, contain more than their fair share of colons and million-dollar vocabulary words, and generally seem far away from classroom life.

I am now an educational researcher and freely admit that I have been guilty of these crimes against clarity and precision in my writing. Too often, academic writing that hopes to offer information to address the most pressing problems facing practitioners uses language that serves to alienate the very people researchers are trying to help — an issue that Dr. Mike Rose of UCLA just implored researchers to address at the AERA conference. The community of academia, like many other specialized communities, can get wrapped up in its own jargon to the detriment of its larger mission.

I can even give Dr. Hess a pass when he declares during a session on public scholarship at the AERA conference that Twitter is a social media site that does not lend itself to substantive public conversations. Perhaps he has seen too many snarky tweets and missed out on the amazing dialogues created by #FergusonSyllabus or #SlaverywithaSmile.

Yet, shortcomings in the communication of research, whether online or at conferences, do not mean that educational research is not crucial to informing and improving educational practice. In my courses for pre-service and in-service teachers, I remind my students that theory and research are inextricably linked to practice — that all decisions made in public education, from how we organize our lessons and assess student learning to how we structure school financing and school choice, flow from theories we have about the purpose of public education, the abilities of our students, and the kind of society we want to create. Naming these theories produces productive debate about the future directions of public education and helps us clarify our practice and policy.

That’s why I quickly stopped laughing at Dr. Hess’ derisive ridicule of educational research in The National Review and turned downright angry at his subsequent lofty dismissal of the entire AERA community of 25,000 education researchers in an EdWeek blog post. He does not simply mock academic jargon. He consistently singles out for abuse scholarly research that forefronts considerations of inequality, whether by race, class, or gender.

While he considers a study exploring Common Core reading strategies to be “reassuringly scholarly,” he lambasts a study exploring racial inequities in college admissions as “politically correct navel-gazing.” He then accuses the entire AERA membership of “groupthink,” proposing that all of its researchers are “fixated on questions of race, class, and privilege.”

Oh wait, but not all of the researchers. Hess excuses the “economists and evaluators” and finds a few words to praise the two sessions in which he himself participated. It sounds to me like Hess has his own privileged assumptions about what real research is.

Based on a few sessions he may or may not have attended (he does not specify), Hess makes the ridiculous assumption that all of AERA is comfortable “comparing Republicans to Nazis” and will not tolerate disagreement.

I fail to understand how Hess can claim that AERA does not welcome different perspectives when it invited him to speak. After all, he advances the idea in his blog that undocumented students should be characterized as “illegal” and “lawbreakers” and that we should be talking about personal responsibility instead of structural inequities. While I don’t have the space here to explain my fundamental problems with these ideas, Hess had a platform to speak at AERA alongside the critical researchers of whom he is so dismissive.

Based on his post, I suspect that Dr. Hess may not have attended AERA’s Presidential Address, offered by Dr. Jeannie Oakes. If he had, he may have learned more about how educational researchers (largely white and male) have historically engaged in counting and measuring — the kind of traditional research that Hess thinks is the only real scholarly kind — in order to hand down prescriptions to educators about how to make their practice more efficient without considering diverse perspectives. And that they have failed to contribute to the inclusive and equitable democratic society that parents want for their children and teachers want for their students.

Perhaps he would have learned that scholars of color who work to amplify the voices of those from marginalized communities and diversify education research have fought and scratched for years in order to carve out space for themselves in national organizations like AERA. And are continuing to fight that uphill battle.

Perhaps he would have heard Dr. Oakes say that, “different questions require different theoretical lenses and different methods and different data.” And that inviting all voices to the table is needed in order for education research to tackle the most intractable issues of our time — no, not promoting charter schools or bashing colleges of education — but fighting xenophobia, racial isolation, and concentrated poverty.

Hess would have learned that he is wrong on two counts. First, rather than being a monolithic organization, AERA advances multiple perspectives, including many that he would agree with. And, second, it is scholars like him rather than AERA who “can and should do better” in considering the nature and purpose of educational research. His claim that he criticizes AERA as a friend makes me curious about what he thinks friendship means.

So, I invite Dr. Hess to do some more listening before continuing to generalize an entire community of researchers. There is room for all of us at the table.