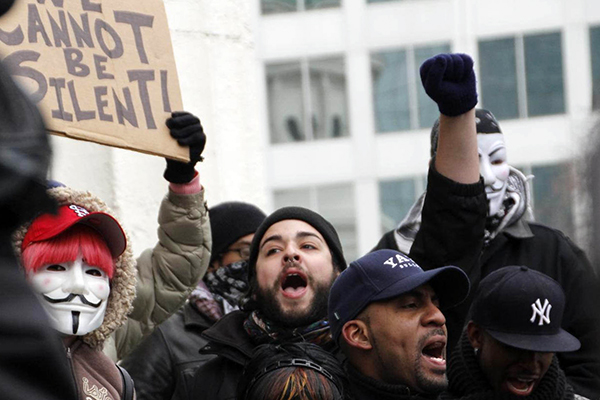 As St. Louis County Prosecutor Robert McCulloch stepped to the microphone on the evening of Nov. 24 to announce the grand jury’s decision about the fate of Darren Wilson, the police officer who shot and killed teenager Michael Brown in Ferguson, Missouri, on August 9, I found myself glued simultaneously to my laptop and the television set. I watched McCulloch’s statement on CNN while toggling between Twitter and Facebook to express my emotions in real time and gauge the reactions of friends, colleagues, and the rest of the world online. Physically, I was sitting on a couch in my parents’ home in a southern New Jersey suburb on an early Thanksgiving visit. I needed social media to feel connected to my own home in Los Angeles, to experience this with the city.

Very quickly, social media became not only a preoccupation of mine, but apparently one of Prosecutor McCulloch as well. Seconds into his statement, after recounting the basic facts of the case, he said, “within minutes [of the shooting], various accounts of the incident began appearing on social media.” My ears perked up a bit at this mention, but I assumed that the role of the Internet in this case would fade into just another detail in his narrative.

That did not happen. Just a few minutes later, McCulloch returned to the subject, this time making his opinion about the role of social media in the investigation crystal clear:

“The most significant challenge encountered in this investigation has been the 24-hour news cycle and its insatiable appetite for something, for anything, to talk about. Following closely behind were the nonstop rumors on social media.”

Now I was riveted — intrigued that he believed all posts on social media were “rumors” and annoyed by his attempt to shift any of the blame for the shooting to posts on Twitter and elsewhere that played a critical role in drawing national attention to this outrage in the first place.

I turned to Twitter and immediately noticed the post pictured above by @TheTweetofGod. I appreciated the satire and re-tweeted the post. I learned quickly that I was not alone in being struck by McCulloch’s dismissive stance on social media. As of Thanksgiving evening, @TheTweetofGod’s post had been retweeted nearly 9,000 times. The rebuttals to McCulloch began almost immediately — the New York Times offered a useful compilation.

I won’t rehash all of the responses since they have already been offered (and quite eloquently) by many, but I will echo the important idea that people in positions of authority often fear social media because of its democratizing force. It offers a platform for voices that might previously have gone unheard to shout, draw the world’s attention, and demand a response.

And, that is exactly what it did (and continues to do) in the aftermath of the grand jury decision. It documented protests, often offering a counter-narrative to the mainstream media narrative of chaos and destruction. It immediately began analyzing pieces of witness testimony and other documents from the trove released by the prosecutor. And it offered raw emotion as folks from around the world registered their responses to the non-indictment — my raw emotion included.

I used Facebook and Twitter in the minutes and hours and days after the announcement to express my own howl of pain and anger and outrage. Since many of my Facebook friends and Twitter followers/followees share my perspective on social and political issues, I found a great deal of commiseration and support that helped me process my emotions. Another critical use of social media: a way to find a community of like-minded individuals that you can build with.

Quickly, however, I also discovered that some people I cared about did NOT share my perspective. And, they began sharing theirs on my page. My emotions were so fresh that I flashed with anger — my status updates gathered comments below them that were often several paragraphs long, filled with competing facts and healthy doses of invective. I couldn’t be calm enough to understand. I read tweets so breathtakingly full of hate that I despaired for any hope of progress.

I believe strongly in the necessity of civil dialogue across lines of difference, which is why I had started sharing my opinions in public online spaces in the first place, but I found myself itching to de-friend some folks. I saw that some of my friends already declared that they were clearing their friend lists of people who shared opinions about Ferguson that differed from their own. I wondered: is it even possible to have the kinds of vulnerable, incredibly difficult discussions about race, criminal justice, and the law that we need to have to foster understanding and hope through social media?

I don’t have the answer to this question. I’m still engaging with folks online, and I haven’t de-friended anyone yet. I think that the kind of sustained listening and relational trust needed for these conversations is best fostered offline, but I do think that social media can offer the spark to create educational dialogue. Which is really all you can ask for in 140 characters anyhow, right?

This spark has taken many forms. In the hours after the announcement, Ashley Ford, a Brooklyn writer, tweeted about her intention to donate to the Ferguson Public Library as a response, which in turn encouraged hundreds more to do the same and has provided the library, which serves as an educational haven for youth and teachers in Ferguson when schools are closed, with hundreds of thousands of dollars in assistance for its work. 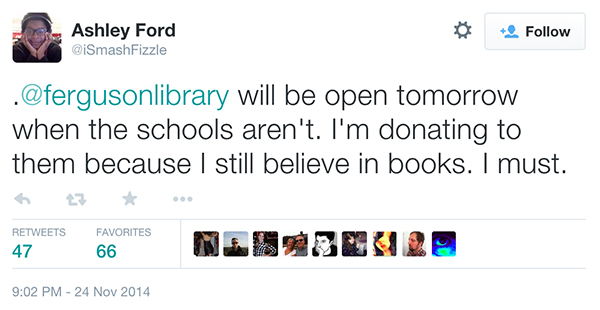 The #fergusonsyllabus hashtag has generated a list of readings, films, songs, and other multimedia resources that could sustain a lifelong series of classes in the history of race in America and beyond.

The #fergusoninclass hashtag has offered a powerful platform for young people to express their opinions, ideas, hopes, and fears about the Ferguson decision and so much more about the experience of race in America. It also offers teachers a starting point for communicating with fellow educators and devising their own ways of broaching difficult but necessary conversations with their students.

And the #fergusonnext hashtag is pushing all of us to think about how we channel our sorrow and frustration into a sustained movement for change. It has morphed into a website, supported by various media partners, where users can offer concrete suggestions for change on topics ranging from police and education reform to economic empowerment.

While those who live by hierarchical power structures and who prefer to make authoritative decisions behind closed doors may fear social media, I hope that the rest of us, and particularly educators, continue to embrace it in order to find solace, be challenged, and spark change.