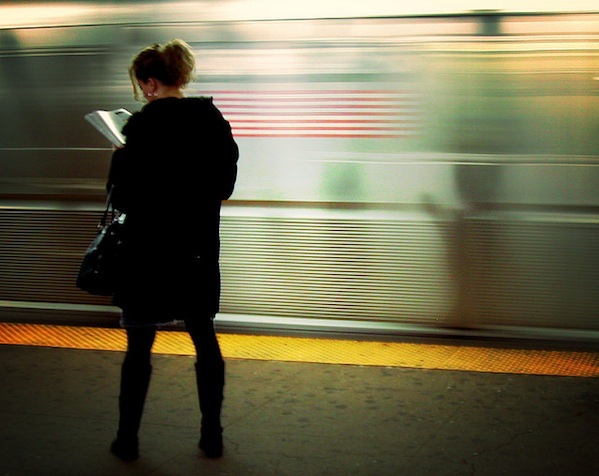 Note: We asked tech-savvy scholar Cathy Davidson to reflect on the realities of an author’s tour in the digital age.  Her new book, “Now You See It: How the Brain Science of Attention Will Transform the Way We Live, Work, and Learn” explores whether our brains are cut out for the age of ubiquitous connection.  I’m just back from Washington, DC, where I gave talks at the Howard Hughes Janelia Research Center and at the NEH Start-Up Grant Conference.  I signed books supplied by Politics and Prose Independent Bookstore, as organized by Perry Pidgeon Hooks, and I was interviewed for an online book webcast “Eye on Books” by Bill Thompson.  I name them each because these individuals and organizations are supporting the apparatus of contemporary book publishing which, now and in the past, is precarious and yet precious.  As of this writing, I’m headed for Chicago where I’ll read at the Chicago Public Library, give a talk at the Learning 3.0 Conference (sponsored by Training Magazine), and tape a segment for Chicago Tonight, a program on WTTW, the local PBS television channel.  In between, I have authored an op ed for a major syndicated newspaper, written three blogs for highly respected newspapers and magazines, written another blog for www.hastac.org and this one for DMLcentral, given two online interviews, one commercial radio interview, updated my Facebook status with news about my upcoming whereabouts, and tweeted and retweeted somewhere nearing 50 times.  Welcome to the author tour, 21st century style!

It is fascinating being an author in what historian Robert Darnton calls humanity’s fourth great Information Age.  He counts the others as the invention of writing in 4000 BCE Mesopotamia, Gutenberg’s movable type, and the late 18th century’s machine production of books, paper, and ink.  Like Darnton, my original field of specialization is that third great Information Age, the Industrial Age era of mass printing and the various forms of print available to middle-class and working-class readers for the first time in history.  Many years ago, in doing the research for Revolution and the Word, I spent a decade in the dusty attics of historical societies, writing an ethnography of the first generation of popular readers, piecing together their story from diaries, from circulating library records, from the actual “scrabblings” they had made in their books, or in the material evidence of their readership such as secret pockets they sewed into the seams of dresses or pantaloons, to conceal the novels, printed in cheap, small duodecimo formats, from the eyes of censorious parents or teachers.

“Parson” Mason Locke Weems was arguably America’s first professional author and, indisputably, the originator of the American version of the author tour.  He wasn’t really a parson but he dressed like one as he traveled from town to town selling popular books, including his Life of Washington (1800), a book filled with highly fictionalized stories of America’s first President, including the apocryphal one about the young boy confessing to chopping down the family cherry tree (“I cannot tell a lie”).  Weems also sold popular novels with titles like The Power of Sympathy, Charlotte, A Tale of Truth, The Coquette, The History of Constantius and Pulchera, or Female Quixotism.  To gather book-buying crowds, he drove his horse cart into the town square, then shouted “Seduction! Murder! Treason!”

I suspect any author on tour today feels a certain reluctant empathy for Parsons Weems.  I don’t do a lot of shouting about “Murder!” or “Treason!”  But, since that fateful day in April 1993, when Mosaic 1.0, the first popular Web browser, was unleashed upon an unwitting public, the world of print has been battered, independent bookstores have gone under, even Borders is no more.  Thus the unpaid blogs, the self-organized author tour, the tweets and status updates, all before a journey that doesn’t involve driving horse carts but taking off shoes, putting liquids in three ounce ziplock baggies, standing ignominiously in full-body scanners, and then rushing for the gate before finding another flight’s been cancelled.

Why?  Why does one take one’s writing to the public?  In 2011, it’s certainly not for the money.  The economics of the book business, for Weems as for about 95% of contemporary writers, does not break in favor of the author.  Or the publisher, for that matter.  Then, as now, publishing books is a precarious business.  There’s a joke in the world of publishing that right after Gutenberg printed his famous Bible, the second book he published was called “The Crisis in Book Publishing.”  That sounds about right.

So why is this author spending the year hawking her books?  As many hours as I spent editing and re-editing Now You See It, as much as I worried over every preposition and double-checked each research study and corrected each citation, the experience of talking about the book is very different from the lonelier, more isolated act of writing.  A book tour in the 21st century is the analog equivalent of what gamers call “augmented reality.”  In ARG’s, part of the challenges are online, and then part are like real-world scavenger hunts that then send you back to the online gaming world again.  In the world of 21st century authorship, a reader might download Now You See It to their Kindle, might read an interview with me on a blog, might listen to a podcast or watch me on YouTube but then there is the actual appearance, the book talk or even an actual reading from the book itself, and then the signing of the physical book.  We shake hands.  We meet.  We say goodbye.  I load up the cart again and giddy-up to my next stop, in this case mostly on planes not horseback, but the mission is pretty much the same.

What Would Socrates Think?

Way back in that first great Information Age, when writing was still something fresh and promising, Socrates was skeptical about writing as a mode of knowledge transmission.  Socrates preferred talking, engaging in dialogue.  He felt writing was a poor translation of the commodious, changeable, expansive interactive idea into a static technology of alphabets, syntax, semantics, grammar, punctuation, and frozen rhetorical form.  Whereas dialogue allows the possibility of disruption, disagreement, and minds changed because of that interactive process, writing, in Socrates’ view, limited the possibility of intellectual transformation.

When I give talks, I like to pass out two important pieces of technology, a pencil and a notecard (machine-made paper).  I set a timer and ask the audience to do an exercise where, for two minutes, they write down three things (the things vary with the audience) on their card, such as the three skills every student needs to master in college to succeed in the 21st century.  The room goes as silent as a tomb.  It’s terrifying, giving a talk to a few hundred people in that silence and I swear my heart beats more loudly than my white plastic kitchen timer.  When it goes off, I then have audience members turn to someone they don’t know, compare what they have written, and from their six things, choose what they think is the most important.  The room is a burst of energy — interactive, lively, engaged.

That interactive moment — the dead silence in the room followed by the lively outburst of dialogue — does more to make people aware of their own varying patterns of attention than anything I can tell them.  It’s a Socratic moment, an object lesson in the importance of interactive learning.  The exercise performs different forms of attention in our world, silent and timed as in a test at school versus bustling and noisy and interactive as it is in so many multitasking moments of our daily lives.  We are in the fourth great Information Age in human history, but, as in the other three, our ways of knowing the world both change and stay the same.  For all our worries and fears about multitasking damaging our brain, we are actually quite good at it and do it all the time, even when we don’t label what we are doing as multitasking.  It’s all quite Socratic when you think about it, when you talk about it.

It is almost impossible to see past our own ways of seeing except when we have the right partners, tools, and methods.  We see our own ideas better when we have to test them in dialogue with others.  It is in interaction, as Socrates implied, that we stretch and grow, know our own limits and then transcend them.  That’s what learning is.  It is also the interactive lesson of this fourth great Information Age.  Whether online or f2f, interaction isn’t just about communicating with others but about letting those others challenge us so that, together, we outdo ourselves.  In the community of the many, responding together, we outnumber ourselves.

Time to pack.  Come on by if you happen to be in one of the places where I’m taking the old horse and cart.