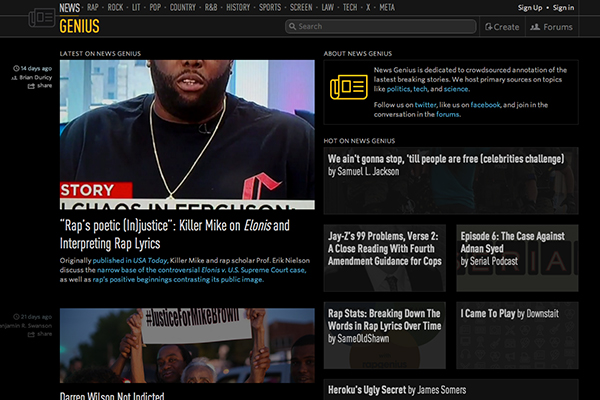 The same evening as the non-indictment announcement in the Michael Brown case was announced, I received an email notification from Genius.com about a teacher-driven conversation called “How do I talk to my students about Ferguson?” More than two dozen responses flooded into the forum discussion including video links, news articles, and canonical literature that could guide classroom discussions. Looking at the way this community has emerged around an online tool, I have been intrigued by the digital literacy possibilities of Genius.com and the communities that it is fostering.

Originally launched as Rap Genius, the site has become a collaborative space for annotation of myriad texts. Looking at the annotated lyrics for rapper Kendrick Lamar’s current single “i,” for example, I see that more than 170 different individuals have contributed to how viewers can understand Lamar’s lyrics. Particularly noteworthy, audio interviews with Lamar about the lyrics also are embedded as multimodal annotations. And, Lamar isn’t the only artist to comment on his own work on Genius.com. Having recently read Jeff VanderMeer’s Southern Reach Trilogy, I was excited to see that he has offered his own annotations of parts of the creepy series.

With sections of Genius devoted to various music genres, the news, sports, literature and other kinds of texts, the possibilities for using Genius within classrooms is a no-brainer. I recently talked with Jeremy Dean who is in charge of the education-focused aspects of Genius. I share our conversation about Genius and educators below:

When I am teaching pre-service teachers the principles of reading instruction, one of the main concepts that discuss the process of “active reading” — asking students to annotate their texts, ask questions, and make inferences as they dive into literary works. Genius is a 21st century tool that allows for participants to conduct such practices collaboratively. However, I’m also struck by Jeremy’s comments that Genius is much more than a singular site for looking at individual texts. Instead the notion of annotating across the web, suggests new modes of literacy development. Want to have your class annotate the Great Gatsby? Sure thing (Gatsby Ch. 1). At the same time, want to have a class annotate Darren Wilson’s testimony from the Michael Brown Grand Jury investigation? No problem. When any text can be a platform for analysis, classroom discussion (and standards-supported instruction) can be tied to the topics that draw student interests and are most crucial for the livelihood of youth in 2014.

Though not a part of my conversation with Jeremy, one of the most fascinating features of Genius is one I discovered more as a fan of hip-hop than as an educator engaging with the school-focused tools of the site. Rap Stats looks at the frequency of specific words in lyrics over time. Considering the vast database of rap lyrics entered into the site, you could look at and compare the frequency various presidents show up in lyrics: 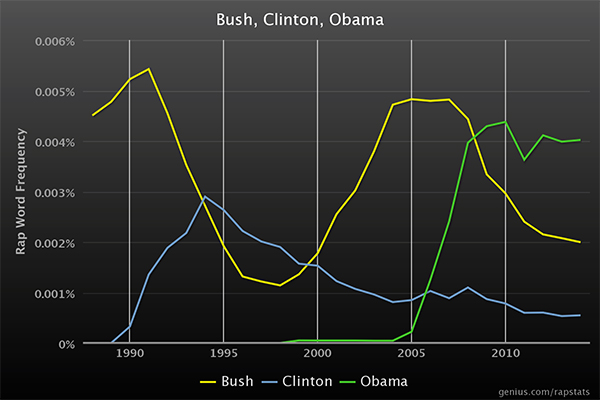 Particularly within the context of digital humanities, I can imagine new classroom literacies emerging from looking at frequencies of words over time. Perhaps an entire database of Young Adult literature, for example, could be analyzed to look at the frequency of words like “Black,” “White,” “Latino,” “Asian.” Or, look at the frequency of the word “post-apocalyptic” in a corpus of scholarly writing about the genre. Like the rise and fall and rise of “OPP” in rap lyrics perhaps we’d see similar trends within literary genres. Within my own discipline, I could imagine looking at how literacy scholars discuss socioeconomic markers, various technologies, and various forms of English (Spanglish, Ebonics, leet) over time. When you annotate the web, the possibilities of allowing students to take up the English language as data to test hypotheses becomes powerfully relevant engagement.

I started this post by describing educators discussing classroom strategies related to Ferguson and the non-indictment. As much at Genius is a platform for annotation, I am also intrigued by how it has catered a community of teachers. Prior to the recorded conversation, Jeremy described Genius as a “community selection platform” and I think that’s another powerful outcome of the rise of Genius. Recent episodes of “Teachers Teaching Teachers” has brought the Genius community into synchronous live discussion about the educational possibilities of the tool.

I should note that I’m generally skeptical of individual tools seen as the latest quick fix for education. Larry Cuban’s recent blog post looks at how frequently technology overpromises to “revolutionize education.” It’s on this note that I want us to consider how Genius is an example of culturally endorsed learning practices being updated for the 21stcentury. In the same way that I received my news about both the Fergsuon non-indictment and the Eric Garner non-indictment through hashtags and widely dispersed news, so too, can I access and engage in texts with a globalized community. As enthused as I am about the Genius platform, I am more interested in how digital annotation can impact literacy research and in-school instruction in the future.