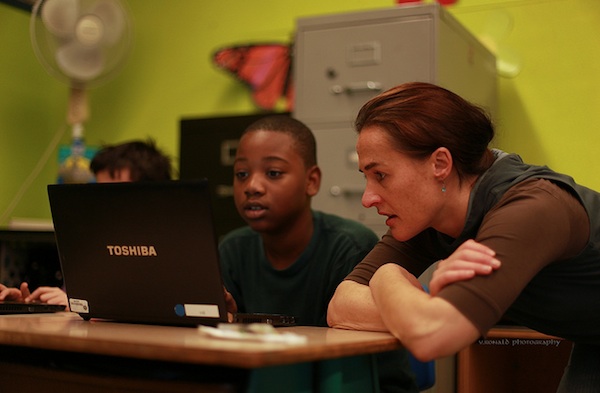 In January 2012 the Mayor of New York tweeted, along with thousands of other people, that he planned to ‘learn to code’ during the course of that year. Whether or not he was successful in this venture, it’s a good indication of how ‘learn to code’ has captured the zeitgeist and become a movement. A recent Computer Science Education week, for example, was  re-branded as ‘Hour of Code’ – and Code.org features celebrities urging everyone to just learn a little bit of code. The argument is largely economic and aligned with agendas around science, technology, engineering and math (STEM). In a previous post I attempted to go beyond these reasons for learning to code by unpacking what it actually means and making alternative arguments for its importance.

In this post I want to argue that learning to code is part of a larger landscape that we at Mozilla call ‘web literacy’. I see that landscape as being increasingly relevant in 2014 as we come to realise that “learn to code!” is too simplistic and de-contextualised to be a useful exhortation. Web Literacy, on the other hand, is reasonably well-defined as the skills and competencies required to read, write and participate effectively online. We’ve included ‘coding/scripting’ as just one part of a wider strand identified as ‘Building’ (i.e. writing) the web. Other competencies in this strand include ‘remixing’ and ‘composing for the web’.

In October 2013 we released a Web Literacy Standard specification at the Mozilla Festival. The word ‘Standard’ here was not to be understood as a top-down, inflexible term, but the result of considered reflection by a community of stakeholders. It was something to rally around, a stake in the ground to show that this area is important to a range of educators, businesses, non-profits, and more. As we’ve done with the word ‘hack’ we’re attempting to rescue ‘Standard’, reimagining it as being something that can be co-created and negotiated by a community.

Now that we’re working with organisations on adoption of the Standard we’ve come to realise that there’s a lot of baggage that comes with that particular word – both in the world of technology and the world of education. The Web Literacy Standard community is wondering, therefore, whether changing terminology to ‘Web Literacy Map’ in 2014 may be beneficial. Mozilla is on a mission to make the world more web literate and if we can remove barriers to adoption, then we should do just that. Just as Paolo Freire saw traditional literacy as emancipatory, so too web literacy is of fundamental importance for understanding the increasingly blended world around us.

Right now, the Web Literacy Standard exists at webmaker.org/standard and underpins the work that we’re doing with Webmaker. Many of the ‘makes’ at webmaker.org are tagged with the Standard, meaning that anyone interested in improving their skills in an area we currently cover can begin to do so. We’re interested in going much bigger with this in 2014, however.

One thing I envisage existing by the Mozilla Festival 2014 is a ‘distributed curriculum’ of learning activities aligned with different parts of the Web Literacy Standard. Initially this would be done through tagging with a community-defined controlled vocabulary. We’ve had some conversations around using the Learning Resource Metadata Initiative (LRMI) for this. Educators, businesses, parents – anyone interested in resources relating to web literacy – would be able to quickly and easily find relevant content. If you’ve got experience of using the LRMI then we’d love to hear from you!

Beyond that is entering the realm of speculation to some degree, but one of the fields defined by the Open Badges Infrastructure is ‘alignment’. This means that not only could we have a distributed curriculum of resources, but we could start thinking about how people could demonstrate the ways in which they’ve leveled up through a series of badge pathways.

One thing I’ve learned in my career so far is that it’s always difficult to see how the dots connect together going forward. Looking back over my time as an educator I’ve seen a growing realisation that young people aren’t ‘digital natives’ who should be left to their own devices. Over the next year or so, I predict that the ‘learn to code’ movement will be seen to provide only part of the solution. We all – young and old – need help in improving our web skills and competencies. And in 2014 Mozilla, through the Web Literacy Standard/Map, through Webmaker, and potentially through the LRMI and Open Badges, aim to help you do just that.