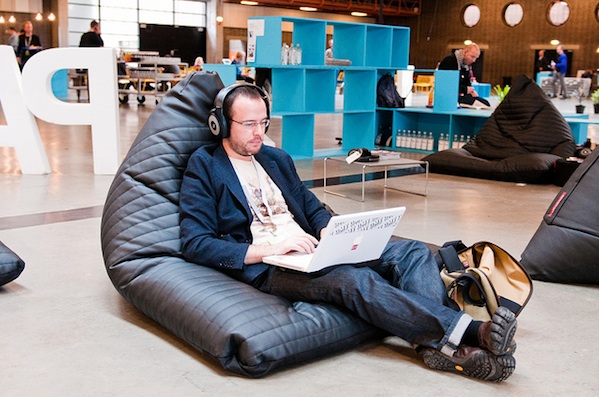 This is the last in a three-part “end of term” series of blog posts on “Doing Better by Gen Y.”  In the first post, one of my students spoke about the paucity of opportunities to actually think critically about the role of digital media in society, in learning, in global relations, in local and global inequalities, and in the workplace.  In the second post, “What Are Digital Literacies:  Let’s Ask the Students,” both of my classes, “This Is Your Brain on the Internet” and “Twenty-First Century Literacies,” helped us understand what about my peer-led, peer-assessed, peer-designed multimedia classes was different and new and useful to their lives.  They had never been asked that question before, it turned out.  They all noted that they use Instructional Technology (IT) in lots of their classes.  Since a number of my students are engineers or computer scientists, they often make technology—doing everything from programming (almost all have some programming background) to creating AI robots.  But even the next-generation technology makers aren’t thinking about what they are doing in a critical way.

As I noted in a recent cover story for the Times Higher Ed, we’ve inherited the research university model, whose forms of specialization and whose divisions into the “two cultures” of science and technology on one hand and arts and humanities on the other mean that, in the normal course of things, those students who are training for future work creating new technology have very little training in thinking critically about it.  And, those who think critically about technology have very little training in doing it.  If the Information Age suddenly melds doing and thinking, expertise and DIY, then we need to tear down the divide of the two cultures in a systematic, thorough, integrated way, so that critical thinking and creative development are (finally!) intrinsically, inextricably necessary, each to the other.  That, to me, is what “digital literacies” are ultimately about—rejoining “making” and “doing” and “critical thinking” and “creativity.”

I’ve been blogging all semester about my two small (< 20 students) seminars.  In the last post, many people began contributing ideas about projects for learning, both in and outside the classroom, that brilliantly combine making-doing-critical thinking-creativity.  In this post, it would be great to start another “forum”: how can we transform the large lecture class into an interactive space for making-doing-critical thinking-creativity?

Since embracing student-created, peer-driven methodology, I’ve not taught a large lecture class.  At this moment, Duke has wanted to be an explorer, pushing the boundaries of teaching, and I’ve concentrated on the small class experience to prototype some methods.  But I’m looking ahead to the large lecture class, one of my favorite forms of teaching and one that, at many universities, isn’t a choice but a necessity.

That’s the question: “What Can We Do to Transform the Large Lecture into an Interactive Experience?” I’ve said before that if we can be replaced by a computer screen, we should be! So what can we do to make the experience of a lecture not simply like participating in an online course but one that takes advantage of the singular experience of group learning?

We go to movies rather than only watch DVD’s alone; we go to sports events rather than just watch them on tv; we hear live music and go to plays together–and we attend great lectures (such as the TED talks) because there is something humanly compelling about sitting among strangers and collectively enjoying and responding to (or not) the same stimuli.  It teaches us something profound about the human community to be in a shared group experience.  I don’t doubt the power of such live performances and gatherings.  But, as educators, what can we do to enhance the interactive doing-as-making, thinking-as-creating capacities of our students in the large lecture?  That’s the challenge.

A few colleagues are already innovating along these lines.  I’ve heard second-hand about someone who now takes his two-lectures-per-week class at a state university, (involving over 300 students) and lectures only once a week and, on the second day, divides the class into teams, each with a team-leader that changes each week.  Each team has one class during the term where they develop a point from the lecture, create some kind of online challenge for their classmates, and then use that challenge interactively in the classroom during their assigned day.  This experimental student-run day takes up some challenge, issue, question, or problem posed from the lecture itself and there’s always some interactive online component.  Unfortunately, because this was related second-hand, I don’t know any more about the grading, the forms of interactivity, or even the actual subject of the course but perhaps other DML Central readers out there will fill in details and ideas.

Here are two others I know about first-hand:

These are intended simply as a stimulus.  If you have found ways to make your large lecture classes interactive, please share them with us—the good, the bad, and the ugly!  There is so much more for all of us to learn together…