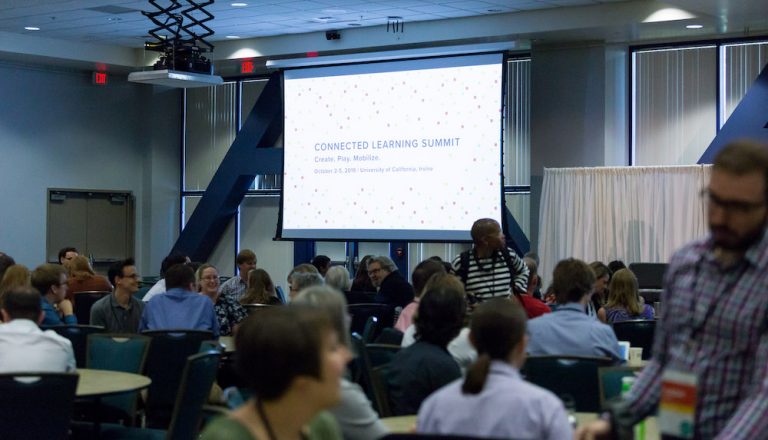 The 2019 Connected Learning Summit, held at the University of California, Irvine earlier this month featured some provocative talks, inspiring attendees to consider what role they can play in addressing some of the big issues society is facing in a digital world and how civic engagement fits in.

The conference began with a fireside chat with Henry Jenkins, the Provost Professor of Communication, Journalism, Cinematic Arts and Education at the University of Southern California, and two youth activists, Justin Scott and Jessica Riestra. Their chat focused on the power of youth to work for change in the world around them, the challenges and rewards of youth activism, and what it means to be an activist.

“As cliche as it may sound, love has a lot to do with activism. You have to love the people because that’s what’s going to keep us all connected,” shared Scott. For Riestra, activism means ‘standing up for what you believe in. it means just taking a stance for those that aren’t able to take a stance.’

When discussing how young activists are not always taken seriously when portrayed in the media Scott was quick to point out that “Just because we are children that does not mean that we’re not doing the work that is needed. We have the experience in the classroom, we know what’s going on.”

Watch the complete conversation below.

Henry Jenkins then joined S. Craig Watkins, a professor at the University of Texas, Austin, Mizuko Ito, the director of the Connected Learning Lab, and Katie Salen, a professor at the University of California, Irvine, for a discussion about digital youth in the talk, “Digital Diversity: How Social, Cultural and Real Life Circumstances Shape Youth Digital Media Practices.”

The Digital Diversity talk covered a myriad of topics about digital youth and, unsurprisingly, concerns about screen time and what should be done about it became the focus of the discussion.

Ito offered advice for parents concerned about screen time: “The number one complaint that kids have is parents don’t listen and they don’t get it so you’ve got to remove that barrier before you can move to the guidance piece. And then it’s a conversation and I think it’s absolutely critical that we equip parents with tools and resources.”

Ito also made it clear that issues surrounding screen time are not a burden that parents should shoulder alone. “I think it’s also absolutely critical as a community that we don’t privatize this burden to parents, that it’s actually the responsibility of industry, of educators, of the public sector to not make this a private burden on parents. And the reason why screen time is such a pain in the butt for families is because we lack the public will to make the internet good for kids.”

Jenkins used an old saying to point out how things have changed in the digital world:
“We used to say it takes a village to raise a child and now we are so busy protecting the child from the village that we don’t harness the wisdom of the elders and we don’t learn from each other to build the cultural supports that kids need.”

The talk concluded with Watkins responding to a question about what skills we should be helping youth develop for the future: ‘Young people are going to need to be able to sort of imagine, envision and argue for a world that is more just, that’s more equitable and I think those are skills that are going to be increasingly important.’

Watch the full conversation below.

In addition to the fireside chat and the digital diversity talk, Eve Ewing, a sociologist of education, and Tracy Fullerton, an experimental game designer and professor and director of the USC Games program, also presented featured sessions. Ewing presented an engaging talk about racism and educational equity (the livestream video is not available for her talk) and Fullerton captivated attendees with a talk about her game, Walden, a game, based on Henry David Thoreau’s time in the woods. You can watch Fullerton’s talk below.

And finally, the Connected Learning Summit would not be complete without the fast-paced, fun, and informative ignite talks. Watch all 14 of the ignite talks below. 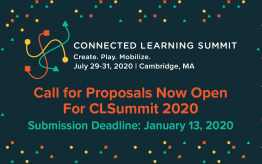 November 4, 2019 Announcing the Call for Proposals for Connected Learning Summit 2020