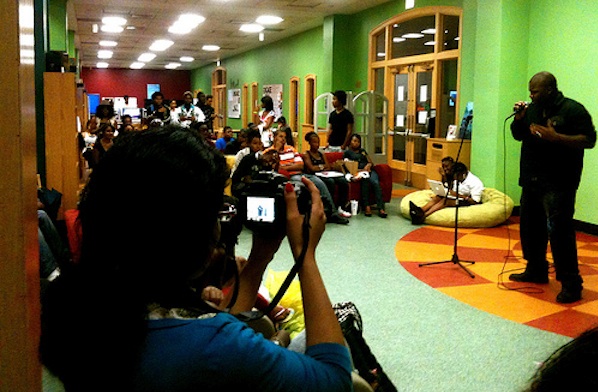 Many school buildings are in a terrible state. Even in seemingly advanced western nations many old schools resemble architectural catastrophes that, along with post-war urban tower blocks and the shopping malls of the 1950s, have largely been left to the crumble of rust. In the last few years, though, there has been a renaissance in school building design based on a reimagining of learning spaces (pdf) that has mirrored the advance in our understandings of education-oriented information and communication technologies (ICT). Yet as I pass my local school, currently being completely rebuilt to a high-tech spec, and watch it rising up from amidst its old ruins, I find myself wondering what these new buildings might represent in terms of our ideas about children.

Don’t some of these new schools look a bit like corporate headquarters or financial centers? Isn’t there something a bit Wall Street or London Docklands about all this shiny glass and polished metalwork? Are the kids going in there to trade in stocks and bonds?

This is a deliberately silly way of thinking about the new imagery of the school. But what it alerts for me is that there seems to be some sort of emerging consensus about the core principles upon which 21st century schools ought to be designed. This isn’t just an issue of design, architecture, or spatial and material aesthetics. It’s a question of metaphor and the imagination. How are schools being reimagined? What are the guiding metaphors or imaginaries for contemporary schooling, and what do these metaphors—which are most clearly materialized through the spatial design of the school but also in policy and polemical texts—suggest about kids?

An End to “Factory Schools”

A recent educational publication in the United Kingdom set out an argument for the transformation of schools over the next decade. “An end to factory schools: An education manifesto 2010 – 2020” (pdf) by Anthony Seldon, argues that today’s schools have become factories where reluctant students are controlled, monitored and processed by the state into “well-drilled automatons.”

Anyone involved in digital media and learning will recognize this sort of argument and its historical relation to the restructuring of education during industrialization. It’s common to condemn the factory schools that emerged at this time as archaic throwbacks to a now outdated political and economic era. Back then, you needed schools to teach strict hierarchy to help sort management from shop floor. You needed schools that had kids sitting in rows completing identical tasks to socialize them into the routine of the manufacturing process. If you were the automobile magnate Henry Ford you needed a workforce to man your huge industrial plants, speed up production of your Model T Ford, and accelerate your economic competitiveness.

Back then, Fordist education was largely defined by conservative institutions concerned with the reproduction of a class-based industrial society, but today of course it is threatened by the post-Fordist logic of global markets and media culture. As critical theorist-sociologist Nick Stevenson writes, schools used to resemble factories; today they look more like corporations.

So are schools being imagined less like industrial era factories churning out compliant managers and workers for Henry Ford and more like financial headquarters for corporate learners like Shia LeBeouf’s “Jake Moore” under the tutelage of Michael Douglas’s “Gordon Gecko” in Wall Street: Money Never Sleeps? Is school design from now on to be concerned with producing the next wave of corporate financial whiz-kids, able to rescue the global economy through financial transactions, trade and exchange?

No, not really. The glass and chrome look belongs to a different kind of corporate imagery and to a different brand of the spatial imagination. The kind of trading and exchanging that it is imagined will be rehearsed in tomorrow’s schools won’t be a simulation of the financial transaction itself, but of the transaction of knowledge based on the processing of information with cutting edge computing technologies. That’s why money never sleeps. Because, unlike the Model T manufacturer, computers stay up all night and don’t care about time zones.

Instead of Wall Street or London Docklands, then, think Redmond. Think Google HQ the Googleplex. In other words, think high-tech corporate science parks. Educational spatial design in many ways reflects the kind of economy that schools are supposed to prepare kids for. Factory-style schools apparently made sense when kids were being sorted for the hierarchies of industrialist labour and management. They don’t make so much sense if today’s kids are going to be tomorrow’s science park entrepreneurs and high-tech creative producers.

Schools are not, of course, quite like this—but they’re starting to come close. The characteristic design you can expect on a high-tech science park or campus is increasingly mimicked in school design, with ramifications for the kind of education that it is possible to imagine. There is an especially strong emphasis now being put on schools, like the corporate cousins with whom they share certain family resemblances, as networked and connected institutions, which shifts the issue from physical to virtual architectures of learning, and implies different imaginaries of teaching.

Designing the educational environment provides built-in spatial pedagogies. The spaces we inhabit frame and determine, to more or less extent, the range of available activities we might carry out within them. This is pretty obvious when you think about the differences between kitchens and bathrooms, or between science labs and libraries. It’s more subtle when thinking about the overall educational vision, mission, or imaginaries that are represented by school design, and which inform expectations about the kind of kids, communities and publics to be produced by it. Spatial pedagogies teach us a great deal about social structures, such as when classrooms are designed in such a way that students’ attention is directed towards the teacher at the front. The design of school space involves designing and defining the norms of educational participation.

The imaginary of schools as nodes in connected networks builds in its own spatial pedagogies materially, through the architecture of high-tech classroom facilities, and in the virtual architecture of online learning spaces. These spatial pedagogies, imported from science parks, are seductive and powerful because they balance education with the imagery of creative media culture and the interconnectedness of networks. If schools look like places where you can dress down, work flexibly, enjoy some down-time, and, most of all, spend a lot of time with seriously cool ICT equipment, then they generate a powerful message system stating that learning too is becoming more informal, flexible, non-routine, high-tech, networked, connected, and cutting edge.

But the science park aesthetic doesn’t quite describe the current milieu. We need to recognize that science parks and high-tech headquarters are representative of only a small part of so-called post-Fordism, that these are just the “front-end” or “graphical interface” for a more complex global machinery of production processes. We might want to think beyond science parks for the influences determining this new architecture of schooling.

Better still than high-tech science parks, then, think Ben & Jerry’s, the ice cream company. Why Ben & Jerry’s? What has making ice cream got to do with reimagining school? Aren’t we back in the domain of factories? Ice cream might be tastier and more appealing to most kids than the old Model T, but a factory’s a factory right? An ice cream factory school is still a factory school.

But Ben & Jerry’s ice cream factory in Waterbury, VT, is a special example. You can visit it and take a tour, inspecting the manufacturing process and watching the workers from a glassed-in mezzanine. Afterwards, you can picnic in the pastures amongst the cows, go to the adventure playground, visit the “Flavor Graveyard,” take in a movie on a giant outdoor screen. There’s an annual Winter Festival with live music and free ice cream samples too. According to the tour brochure (pdf), it’s fun and it’s educational! You can learn about the ice cream production process, and how the company’s “activist” mission statement on the environment, peace and justice is incorporated into its decision-making, as well as the history of how Ben and Jerry turned five bucks into a business that “shares its success with its employees, and the community and has fun doing it too!”

There is much about Ben & Jerry’s that is illustrative of how schools are being reimagined. Yes, it’s still a factory, but it’s one you visit for fun—in fact, just working there is fun! Besides being fun, it’s educational too, and it has spectacular pastoral scenery to enhance your well-being. Yes, it’s a processing plant, but it’s got a multimedia presentation. The website has its own “web odyssey” detailing the production process from “cow to cone” as multimedia animation. Yes, it’s a global business that has to compete in a mediated image-based market to make money in the capitalist fashion, but it’s a kindly capitalism, a caring capitalism, that looks after its employees and its community. Yes, it’s a global brand, but it’s locally responsible. Yes, it was founded by two businessmen, but they’re dressed-down businessmen, with open shirts and beards. In fact, they look like they belong on one of those high-tech science parks.

In the world of Ben & Jerry, the factory has been transformed into a community and into tourism, into a site of entertainment, a site of play, a site of learning, and a site of work all at once.

Ben & Jerry’s is absolutely representative of what critical theorist Slavoj Zizek has called “smart” in his article “Nobody has to be vile”:

Being smart is the new maxim for the dressed-down science park aesthetic, for the caring community and socially committed activism of Ben & Jerry’s vision of corporate capitalism. You don’t need to be a rabid anticapitalist or Naomi “No Logo” Klein to wonder whether this kind of corporate rebranding might be exerting effects on schools.

Today’s schools are being reimagined according to the guiding metaphors of Ben & Jerry’s brand of caring, committed-activist corporations. This blends together a rich confection including the architecture of science parks and pastoral landscapes, production processes that are represented through multimedia facades, and compelling ideas about work and learning that are informal, fun and cutting edge.

This is what might be meant by imagining the design principles for “smart” post-Fordist schools. Schools can be reimagined and redesigned to be smart when the hierarchies and structures associated with factories are dismantled. Schools can become smart through the design and construction of new spatial pedagogies of informality, enterprise and networking, plus social activism, empowerment and work-life balance.