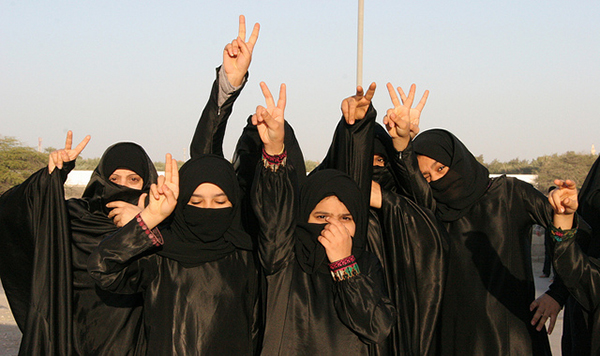 Nabela Noor, a young American Muslim Youtube personality, was born of Bangladeshi parents and had developed a large following based on her make-up tutorials and fashion advice. Frustrated by what she saw as Islamaphobic discourse in American society, intensified by Donald Trump’s candidacy for president, she recorded and shared with her followers a powerful statement, “Dear America.”

Speaking directly to the camera, the 22 year old describes herself as “an American through and through” who is also a Muslim, shared the ways her schoolmates responded differently to her after 9/11, and discussed the chilling climate her family members faced as they went about their normal lives.

Sangita Shresthova, the research director for our USC-based Civic Paths group, encountered Noor’s story while writing an account of the political lives of American Muslim youths, who she suggests in our book, By Any Media Necessary: The New Youth Activism, are always already soaked in politics in post-9/11 America. They can choose to speak up or remain silent, but political meanings are going to be made of their lives either way. In Noor’s case, she had developed her voice by participating in a community of practice. One might argue that her work was always political insofar as providing beauty tips for brown women calls into question what counts as beauty in our culture. She had a platform and an audience. But, with this video, she learned to turn her voice toward participation in a larger political movement. One can see the transformation occur within the video itself — she starts out a little hesitant but by the end, she speaks with conviction and the video’s circulation brought it to the attention of a diverse set of audiences, many of whom learned new ways of thinking by watching her tell her own story to the camera.

Nick Couldry has described voice as the process of giving an account of oneself, one’s experiences, one’s perspectives, for the purpose of changing the hearts and minds of others. More and more young people around the world are finding and deploying their voices online though often, they are not heard because adult leaders are looking in the wrong places, do not understand their language, and are not prepared to hear what they have to say.  This confessional video format has proven effective in increasing visibility across a range of recent American social movements, especially the DREAMer movement for undocumented youth, as our book recounts.

Noor’s first attempt to speak out brought her into more direct political engagement: she was invited to ask a question of the Republican presidential candidates during a 2016 debate, she provided critical commentary on Fusion, and she worked on the Bernie Sanders campaign. In the course of our research, we’ve found many such stories as young people have turned to video sharing and social media sites to circulate their own stories and in the process, learned to deploy their voices toward political ends. Not every young person gets heard when they turn the camera on themselves and share their political perspectives with the world, but our research suggests such acts make vital contributions to today’s social change movements — from the DREAMers to Occupy Wall Street, from #blacklivesmatter to the women’s march.

I look forward to telling Noor’s story with Esra’a al Shafei, the Bahraini civil rights activist, when we have a public conversation next week at this year’s Digital Media and Learning conference. When I corresponded with her about this event, she shared some of her own story with me:

“I founded Majal.org in Bahrain as a student twelve years ago under the name Mideast Youth. We focused on advancing the rights of marginalized populations in our region and were largely driven and directed by the perspectives of our youth. As young people working for local social change, it was only natural to adopt and depend on new media to amplify oppressed and underrepresented voices.  We undertook campaigns to free political prisoners, to create self-sustaining protected spaces for LGBTQ Arab youth, encouraged political discourse through music with a platform for regional artists (Mideast Tunes), and more. All of these projects were made possible through the ingenuity of our youth and the most cutting-edge technology available at the time — because we felt that was our only weapon against the injustices we were all experiencing to various degrees daily. The internet offered us with limitless opportunities to advocate for change in our societies, but it was not without its challenges. Censorship and surveillance were huge obstacles, and in the cases of many of our teammates, continue to present immediate hazards. Though our organizational focus has since moved beyond the MENA region and we have since rebranded as Majal, our ethos and methods have remained the same. Our campaigns have real world impact though they are digitally-based, and though we’re a bit older now, we make an effort to view the web with young eyes. We are always on the lookout for the next way to connect with audiences, constantly iterating our platforms and creating more engaging ways to present our work and further our mission.”

Like many Americans, I still have much to learn about the conditions she faces in doing activist work in her region and like many Americans, I have stereotypes to overcome if we are to really be able to share lessons learned by young activists working in these two very different contexts. I have been spending more times in recent years trying to better understand Muslims, visiting mosques in India, Lebanon, Indonesia, and the United States, speaking with educators, journalists, activists, and media makers from the Arab world. But I recognize the limits of my own knowledge.

I certainly know that the “Arab Spring” movements were misreported by western media, understood primarily in terms of Twitter and Facebook revolutions, a frame that ignored the real organizing taking place on the grounds and in the streets in these countries. Our romanticization of these digital freedom fighters makes it harder for us to make sense of the conflicting reports we receive about the long-term impact of these social change movements.

I have been working with an Annenberg Ph.D. student, Yomna Elsayed, whose dissertation project focuses on the various ways internet comedy and music keep alive the prospects of change in her home country, Egypt, encouraging young people to remain skeptical of entrenched power and ready to mobilize for revolutionary change when the moment is right.  Esra’a al Shafei has similarly deployed cultural tools in her own effort to promote equality and social justice in her country — a musician herself, she helped to launch MidEast Tunes, a website and app calling attention to politically-engaged musicians from across the Middle East and North Africa.

Around the world, we are finding young people are frustrated with the tools and language of traditional politics, seeking new ways of expressing their desires for change that speak to and for others of their generation. We are finding young people constructing new forms of the civic imagination, using the resources of popular culture to help them articulate what a better future might look like.

Writing for the Huffington Post earlier this year, Esra’a al Shafei offered a few perspectives as a human rights activist directed at those western companies that owned the platforms and tools she and her countryfolk use to challenge their governments:

“As new citizen media from protests and conflicts is uploaded and shared across the web, emerging and existing platforms must prove they are committed to hosting valuable citizen-generated content with attention to its safekeeping and integrity, careful archiving of media in a way that is searchable and accessible, and no monetary cost to promote visibility. Likewise, we as a global community must safeguard and support those who take risks by sharing this evidence, allowing for anonymity and employing enhanced digital security. Only continued innovation geared towards the needs of the communities generating this evidence will ensure citizen media’s full potential for bringing about awareness, action and justice.”

She described the needs for new technologies designed with the needs of global human rights activists at their center, citing her own CrowdVoice.Org, as an example of how crowd-sourcing and crowd-verifying tools can better serve the needs of social movements.

The first wave of excitement about digital politics has passed, maybe even the second wave has bit the dust, and there are many reasons for skepticism, if not cynicism, about whether social media platforms enables users to challenge entrenched authority and change the world. But, it would be a mistake if we denied the reality that social change is happening differently now as a consequence of the generation that has come of age with the web and has experimented with how its platforms and practices might be deployed in struggles for human rights and social justice. The internet may not have changed everything, but it has definitely changed many things about the way politics operates in the 21st century, and youth have been on the front lines of this process.

This is why a conversation like the one we will be having at this year’s DML conference seems so urgent: because we can learn much by looking at the process by which young people, working in different political and cultural contexts around the world, are being introduced into social movements through their cultural participation, the ways they are finding their voice and learning to spread their messages, the ways they are organizing and rallying for change. As young people across the United States are becoming more “woke” to the conditions impacting their lives, we need to consider what social movements around the world can learn from each other — what tools they share, what practices they deploy, what dangers they face, and what motivates their engagement and participation. I will be coming into this exchange with a lot of questions; I am hoping the DML community will bring questions of their own, since above all, we need to listen and learn.