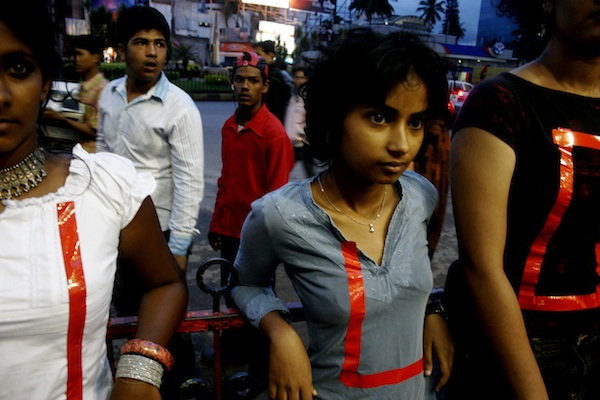 On a recent visit to Sarai, a Delhi research think tank housed in the Centre for the Study of Developing Societies, I met a number of female university students who described participating in the mass protests that occurred after a 23-year-old physiotherapy student was raped and murdered in what many perceived as an event that unleashed a torrent of dissent to express longstanding dissatisfaction about lax policing and prosecution of crimes against women in India.  Participants recounted assaults at demonstrations that included braving tear gas, water cannons, and violent interruptions by police of the peaceful sharing of experiences among congregants after years of shame and silence.

Many had responded to Facebook invitations or details contained in mass SMS text communications with instructions to converge at protest areas at police headquarters or the symbolic site of national identity, India Gate.  Some also described the role of speeches disseminated on YouTube by activist leaders such as Kavita Krishnam – secretary of the AIPWA (All India Progressive Women’s Association) – or the importance of discourse being shared on blogs such as Kafila.

At Sarai I also met a number of students who described themselves as local volunteers for Blank Noise, an art action group that improvises creative ways for women to reclaim public space and to engage men in dialogue.  Founder Jasmeen Patheja, a TED fellow, agreed to sit down for an interview to discuss how social media galvanized her collaborators long before news coverage of the 2012 rape case transformed sexual violence into a matter for discussion in the mainstream media and large-scale public debate.  Blank Noise was initiated in Bangalore, but it is now active in many different cities; a strong core group is now in Delhi too.

Influenced by feminist artists of the seventies and eighties, particularly the Guerilla Girls, and artists such as Marina Abramovic, Suzanne Lacey, and Sophie Calle, Patheja began with a series of mind mapping exercises around the theme of “public space” and soon discovered that subjects who participated in interviews or focus groups tended to associate a host of negative terms, such as “aggression,” “stare,” “vulnerable,” “groping,” and “feeling sick inwards,” with a concept that should be linked with positive civic participation and cultural interaction.

As part of her final senior project at Srishti School of Art, Design, and Technology, Patheja led a series of workshops over the course of a three-month period with other female artists and began to focus on raising public awareness about how the issue affects many types of women in many situations during many times of the day.  Srishti has a history of research-based arts practice that emphasizes community engagement and participatory culture.  Patheja graduated in 2003, and she has now returned to Srishti as an official Artist in Residence there while she continues work on Blank Noise.

Social media was an important vehicle for her work from the very beginning of her college career as an artist and activist.  Conventional awareness-raising campaigns with public service announcements or billboards were too static and too costly for her low-budget efforts, and she wanted to encourage active participation rather than passive consumption and do substantive research on responses rather than merely blast messages unidirectionally.  As she explained, “social media enables Blank Noise to take the form of an ongoing conversation.  It is shaped and built by testimonials” as well as by “collective definition building via arguments and counter arguments.” 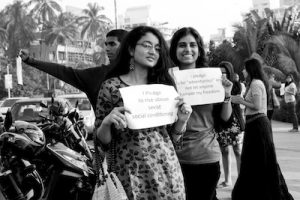 Around 2004, Patheja “stumbled upon blogging as means to document and share ideas” and then “realized that conversations were beginning to build right there.”  Initially she began by posting photographs of men on the street, who telegraphed their aggression in body language and mastery of space, but she and the core team of six Blank Noise facilitators worried that a “wall of shame was not what we wanted at all” and that potential dynamics around class entitlement might also be problematic.  In revising the portraits of these men, she made their identities unrecognizable with pixilation and reverse color and refocused her attention on “strategies of engagement and the gamut of public interactions.”  Rather than identify individual men, she wanted to “identify the type and intention of what becomes harassment,” which “threw open questions on flirting, flirt spaces, codes, consent, and class-based issues.”

In 2006 the Blank Noise team organized a blogathon in which bloggers shared their experiences of street harassment.  Spurred by the initiative of volunteer Smita Jain, a “mass catharsis on the web” took place, which filtered into the mainstream press both nationally and internationally.

Although many of Patheja’s projects use web-based technologies of communication, much of her work is very site-specific and grounded in material culture, such as a project in which tables were set up in Bangalore’s “Rapist Lane,” which Blank Noise renamed “Safest Lane” for the occasion and set up tables to foster dialogue in extended one-hour conversations over tea and samosas.  The dialogues were intended to “unlearn biases and fear” and the subject matter covered “anything and everything except street harassment” (See coverage of the event in The Atlantic here).  Murals were also painted on the street with “Idle Giant Action” of larger-than-life women in silhouettes to mark where territory had been reclaimed.  The 2006 Night Action Plan, which included eight testimonials rendered in graffiti on pavement and roads, “were designed to challenge the perception of time, place, and age” with the dynamic between “the identity of survivor and the role of the mute spectator.”

As Patheja completed projects, she found that she needed to find different ways to overcome stigma and people’s aversion even to describing unpleasant interactions with aggressive men as sexual abuse.  Themes began to emerge, which had to do with anxieties about the body and particularly changes in the body.  She argued that “blame, shame, and guilt are at the core of the silence and discomfort around the issue.”  Blank Noise was devoted to “building testimonials, creating vocabulary, and creating a safe space for people to be able to talk about their experiences.”

The art world from Brooklyn to Stuttgart had began to notice the work of Blank Noise to “bring men and women into conversation about street harassment and to question boundaries of what constituted ‘teasing,’ ‘flirting,’  ‘harassment,’ and ‘sexual violence.’”

By using the common Indian euphemism “eve teasing” as a way to identify potentially offensive behavior, Patheja soon found herself with lots of material to process.  Blank Noise created matrices with boxes for different types of behavior and encouraged participants to place thumbprints in the appropriate rectangles to mark behaviors that constituted eve teasing (men used blue; women used red).  Women donated the clothing they were wearing when they felt victimized as a striking form of display media.  The group even made an “eve teasing food chart” with a menu of all of the food-related catcalls that women remembered hearing.

Creating hashtags was an important way to raise awareness, as in the case of the #INeverAskForIt campaign in which women were invited to tweet what they were wearing when they experienced sexual violence.  Blank Noise also organized events in which women sat in the general compartment on different forms of transportation (India is famous for its female-only train cars and bus sections).  In this action, participants were encouraged to use the hashtag #segregationnosolution in their Tweets.  In the future, she hopes to create a mobile game that focuses on transportation segregation.

On Jan. 1 people in 11 cities took the Safe City Pledge.  Participants were encouraged to make “safe city pledges” that emphasized how they could “influence change in their own sphere.”  A number of professions were represented in the campaign from schoolteachers to gynecologists.  Pledges could be eloquently simple, such as “I pledge to walk alone at night.”

On Jan. 19 Blank Noise organized a 24-hour tweetathon with #SafeCityPledge as the focus, which was publicized on the Blank Noise blog and on Facebook.  “We had men and women from across the world curate this on an hourly basis.  Two of our hourly curators were from the USA: Mandy Van Deven and Kolly Kearl.” 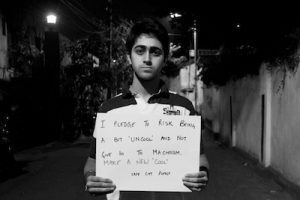 They have also partnered with Breakthrough (the subject of an earlier DMLcentral post) on #segregationnosolution and then created some live events around collecting pledges and promises from men that combined the Blank Noise #safecitypledge campaign with the Breakthrough #ringthebell effort.

One of the challenges facing equal rights activists in India has to do with a climate of fear about the dangers facing women and how the media news cycle contributes to constraining women’s freedom by perpetuating protectionist ideologies.  According to Patheja, this perpetuates “an environment of blame and warnings” in which “the onus of safety falls on women.  It’s an environment that’s constantly warning you ‘be careful.’”  To dramatize this idea, she created a video in 2003 that appropriated, performed, and remixed coverage of rape in the news during a three-month period.  She also plans to create an online video that adapts her “Step By Step Guide to Unapologetic Walking” as a sequence of multimedia how-to instructions.

Blank Noise volunteers were encouraged to adopt new identities as “Action Heroes” and to reclaim public space by allowing themselves to appear in public idle and relaxed. 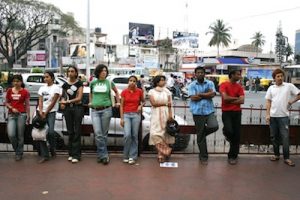 Sometimes they were differentiated with arrows to publicize the street action, and sometimes participants in flash mobs performed street action without special demarcation.  As Patheja observed, “Action Heroes make the public space familiar by asserting their presence there. There is a purposeful confrontation of fear, of learning to claim.”  During Blank Noise events, “Action Heroes made eye contact, leaned by the railing, worked towards being unapologetic about their presence and purpose in city spaces.”

Facebook has also been a place where participants could try out new identities as Blank Noise supporters.  Patheja produced a range of speech balloons for pre-existing comic book avatars that people could use as their Facebook profiles to show solidarity, including an active community of men.

When I asked her how she dealt with the transience of political engagement on Facebook, where gestures of political affirmation could be relatively short-lived, she was philosophical.  “I think it is okay to create engagement up to a point.  Every campaign has a life and an afterlife.  The worry is when there’s a belief that a social issue can be addressed entirely through one kind of medium or that Facebook alone is the only way to address an issue.  The campaign could end but the conversations continue and could leave a resonance.  We have to understand, accept, and work with the limitations and possibilities of a medium.  We’ve been using the web for almost ten years now and have built several events over the years.  The conversations are sustained, documented, shared across many web spaces, including Twitter, Facebook, Blogger, and Orkut.”

For those who want to become involved with the Facebook Blank Noise community, the links are here and here.