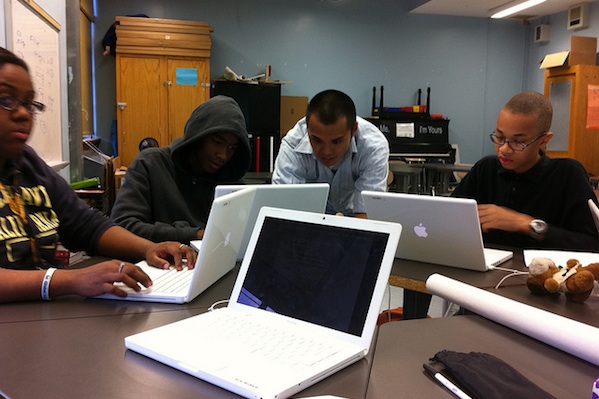 At the top of the must-read list this month is “How the Internet Gets Inside Us,” an article by New Yorker writer Adam Gopnick who offers an insightful overview of the range of opinions found in recent books regarding the shifting relationship between humans and technology. He categorizes books about the Internet into the Never-Betters, the Better-Nevers, and the Ever-Wasers. The Never-Betters believe that we’re on the brink of a new utopia, the Better-Nevers think that we were better off without the Internet, and the Ever-Wasers insist that at any moment in modernity something like this is going on, which is exactly what makes it a modern moment. The terms may be silly, but the points are dead-on, as are the relevant books he assigns to each category that deserve further reading. At Global Kids, we tend to be inspired by the Never-Betters, cautioned by a huge dose of Ever-Wasers, and try to keep on top of the Better-Nevers so we can understand their concerns.

We can never get enough of videos that appear to document Internet usage but are actually constructed to tell a story or teach a message. Recall that recent Google Ad, where through Google searches we’re told a tale of young love in Paris. (In fact, did you know Google made a tool so you can create your own?)

While this video is a few years old, we got excited recently by Information R/evolution, which, as they describe it, explores the “changes in the way we find, store, create, critique, and share information.” And you can read here about how this video was used in a community college classroom.

A Closer Look at Generations and Cell Phone Ownership (infographic)

An excellent infographic from Pew with recent data on who uses cellphones (e.g. 85% of Americans age 18 and older own a cell phone). What does this have to do with learning? We see more and more educational initiatives using cellphones, specifically geolocative (love that word) activities; these rely on the ability of cellphones to know both where the phone is in the world and then relate it to virtual data also geolocated. For example, last year Global Kids worked as part of the New Youth City Learning Network with the American Museum of Natural History to support the development of ecoliteracies among  youth learners using mobile phones to explore the ecology around the museum. This month we began a new partnership with the New York Public Library in which Global Kids Youth Leaders will develop a geolocative scavenger hunt around their local library to be played by youth patrons, exploring the history of their community. And we are far from alone exploring how mobile phones can civically engage youth to connect with their local and global communities. The challenge, however, moving forward includes identifying the shifting technological baseline so projects like ours don’t exasperate the “digital divide” and the “participation gap.” Infographics like this one, and the data behind it, play an invaluable role in this process.

This article from Prospect Magazine asserts that “from privacy to data ownership, and from intellectual property to the ethics of conduct and commerce, the intersection between technology and society poses some of the most vital questions that our intellectual culture must address if we wish to describe—let alone decide—what 21st-century living means.” The article then goes on to identify the ten most important minds who can help us find our way.

The latest annual update from the New Media Consortium take a group of prominent educators through an exercise in collective intelligence to produce a list of the six most relevant tools for education, within three different time frames, as well as identifying the latest technology trends. The new report identifies e-books and mobiles as the most important tools to watch this year, followed in the next few years by augmented reality and games-based learning.

Global Kids points us to important resources in the digital media and learning field each month.