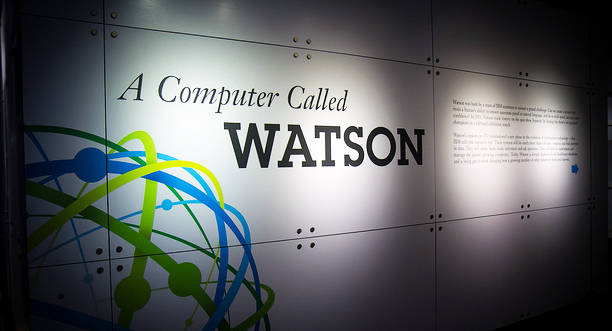 The world’s largest edu-business, Pearson, partnered with one of the world’s largest computing companies, IBM, at the end of October 2016 to develop new approaches to education in the “cognitive era.” Their partnership was anticipated earlier in the year when both organizations produced reports about the future trajectories of cognitive computing and artificial intelligence for personalizing learning. I wrote a piece highlighting the key claims of both at the time, and have previously published some articles tracing both Pearson’s interests in big data and IBM’s development of cognitive systems for learning. The announcement of their partnership is the next step in their efforts to install new machine intelligences and cognitive systems into educational institutions and processes.

At first sight, it might seem surprising that IBM and Pearson have partnered together. Their reports would suggest they were competing to produce a new educational market for artificially intelligent or cognitive systems applications. Pearson, however, has had a bad couple of years, with falling revenue and a major organizational restructure in 2016, which appears to have resulted in the closure of its own in-house Center for Digital Data, Analytics and Adaptive Learning. IBM, meanwhile, has been marketing its cognitive computing systems furiously for use in business, government, healthcare, education, and other sectors. The key to the partnership is that, despite its business troubles, Pearson retains massive penetration into schools and colleges through its digital courseware, while IBM has spent years developing and refining its cognitive systems.

The Pearson-IBM partnership also taps into current enthusiasm and interest in new forms of machine-based intelligence. This is reflected in the new Leverhulme Centre for Future Intelligences at the University of Cambridge, a White House report on preparing the future of artificial intelligence, and a Partnership on AI established by Facebook, Amazon, Google, IBM and Microsoft.

Together, these developments point to a growing concern with forms of machine intelligence that are sometimes described as “weak” or “narrow” forms of AI. Weak or narrow AI includes techniques such as cognitive computing, deep learning, genetic algorithms, machine learning, and other automated, algorithmic processes, rather than “strong” or “general” models of AI which assume computers might become autonomous super intelligences.

So, what is education likely to look like if the glossy imaginary projected by Pearson and IBM of learning in the cognitive era materializes in the future?

The key technology underpinning their ambitions is Watson, IBM’s highly-publicized cognitive supercomputing system. The IBM webpages describe Watson as “a cognitive technology that can think like a human.” Watson is able to analyze and interpret data, including unstructured text, images, audio and video. It can “reason” and “provide personalized recommendations by understanding a user’s personality, tone, and emotion.” Watson can also “learn,” utilizing machine learning to “grow subject matter expertise,” and “interact” through “chat bots that can engage in dialog.”

Though IBM has been promoting cognitive computing in education for a few years — in 2013, it produced a glossy visualization of the classroom in five years time, a “classroom that will learn you” — it is now firmly seeking to establish Watson in the educational landscape. IBM Watson Education “is bringing education into the cognitive era” through “personalization”:

Cognitive solutions that understand, reason and learn help educators gain insights into learning styles, preferences, and aptitude of every student. The results are holistic learning paths, for every learner, through their lifelong learning journey.

One of the key applications IBM has developed is a data-based performance tracking tool, IBM Watson Element for Educators:

Watson Element is designed to transform the classroom by providing critical insights about each student — demographics, strengths, challenges, optimal learning styles, and more — which the educator can use to create targeted instructional plans, in real-time.

Designed for use on an iPad so it can be employed directly in the classroom, Element can capture conventional performance information and student interests and other contextual information, which it can feed into detailed student profiles. It can also track whole classes, and automatically generates alerts and notifications if any students are off-track and need further intervention.

Another complementary application is IBM Watson Enlight for Educators, designed to:

support teachers with curated, personalized learning content and activities aligned with each student’s needs. … Teachers can optimize their time and impact throughout the year using actionable, on-demand insights about their students … [and] craft targeted learning experiences on-the-fly from content they trust.

The partnership with Pearson will allow Watson to penetrate into educational institutions at huge scale, thanks to the massive reach of Pearson’s courseware products. Pearson’s press release stated it would “make Watson’s cognitive capabilities available to millions of college students and professors”:

Pearson and IBM are innovating with Watson APIs, education-specific diagnostics and remediation capabilities. Watson will be able to search through an expanded set of education resources to retrieve relevant information to answer student questions, show how the new knowledge they gain relates to their own existing knowledge and, finally, ask them questions to check their understanding.

Strikingly, it proposes that Watson will act as a:

flexible virtual tutor that college students can access when they need it. With the combination of Watson and Pearson, students will be able to get the specific help they need in real time, ask questions and be able to recognize areas in which they still need help from an instructor.

The IBM press release added that Watson would be “embedded in the Pearson courseware”:

Watson has already read the Pearson courseware content and is ready to spot patterns and generate insights.  Serving as a digital resource, Watson will assess the student’s responses to guide them with hints, feedback, explanations and help identify common misconceptions, working with the student at their pace to help them master the topic.

What Watson will do, then, is commit the entirety of Pearson’s content to its computer memory, and then, by constantly monitoring each individual student, cognitively calculate the precise content or structure of a learning experience that would best suit or support that individual.

The partnership is ultimately the material operationalization of a shared imaginary of machine intelligences in education that both IBM and Pearson have been projecting for some time. But, this imaginary is slowly moving out of the institutional enclosures of these organizations to become more widely perceived as desirable and attainable in the future.

Caution is clearly required about the extent to which the technology will live up to its futuristic hype. As educational technology critic Audrey Watters has argued, “the best way to predict the future is to issue a press release.” IBM and Pearson are both marketing their vision of the cognitive future of education because their businesses depend on it. For them, it’s necessary to suggest that people today are at a cognitive deficit when faced with the complexities of the technologized era, so they can sell products offering cognitive enhancement.

The promise of cognitive computing for IBM, as stated in its white paper “Computing, cognition and the future of knowing,” is a fundamental reimagining of the “next generation of human cognition, in which we think and reason in new and powerful ways”:

These extraordinary claims put companies like IBM and Pearson in the cognitive enhancement business. They have positioned themselves at the vanguard of the generation of hybrid “more-than- human” cognition, learning and thinking.

Clearly there may be consequences of the development of cognitive enhancement technologies and machine intelligences in education. They could ultimately become responsible for establishing the educational pathways and progress of millions of students. They could “learn” some bad habits, like Microsoft’s infamous AI chatbot. They could be found to discriminate against certain groups of students, and reinforce and reproduce existing social inequalities. Privacy and data protection is an obvious issue as all the intimate details of individual students are ingested and stored on the IBM cloud.

Access to these technologies won’t be cheap for institutions either. This could lead to competitive cognitive advantage as new forms of hybrid cognitive capital become available for students at institutions that invest in these cognitive systems. Given that Pearson’s own global databank of country performance, the Learning Curve, compares education systems according to students’ “cognitive skills,” measuring national cognitive capital as a comparative advantage in the “global race” could also become attractive to government agencies.

In this final sense, IBM and Pearson also anticipate the development of real-time adaptive forms of governance in education. Both Pearson and IBM are trying to bypass the cumbersome bureaucratic systems of testing and assessment by creating real-time analytics that perform constant diagnostics and adaptive, personalized intervention on the individual. Pearson’s previous report on AI in education spells this out clearly:

Once we put the tools of AIEd in place … we will have new and powerful ways to measure system level achievement. … AIEd will be able to provide analysis about teaching and learning at every level, whether that is a particular subject, class, college, district, or country. This will mean that evidence about country performance will be available from AIEd analysis, calling into question the need for international testing.

Although the current partnership with IBM may be focused on college students, this is just part of a serious aspiration to govern the entire infrastructure of education systems through real-time analytics and machine intelligences, rather than through the infrastructure of test-based accountability that currently dominates. As Adrian Mackenzie argues, “cognitive infrastructures” such as Watson “present problems of seeing, hearing, checking and comparing as no longer the province of human operators, experts, professionals or workers … but as challenges set for an often almost Cyclopean cognition to reorganise and optimise.” IBM and Pearson are seeking to sink a cognitive infrastructure of accountability into the background of education — an automated, data-driven, decision-making system which is intended to measure, compare, reorganize and optimize whole systems, institutions and individuals alike.