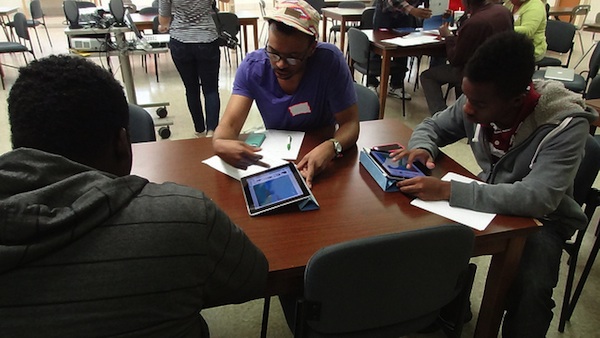 The opening sentence to a recent Los Angeles Times article says it all: It took exactly one week for nearly 300 students at Roosevelt High School to hack through security so they could surf the Web on their new school-issued iPads, raising new concerns about a plan to distribute the devices to all students in the district.

When educators and policymakers assume that simply investing in technology will “level the playing field” in schools, it’s clear that those of us in the DML community have a lot of work to do.  As educational researchers who were teachers in the Los Angeles Unified School District, we want to discuss some of the biggest problems unfolding in the poorly designed technology plan.

Los Angeles Unified School District’s rollout of iPads has played out in an all too predictable fashion.  The $1 billion venture into providing the tablet devices was ill-conceived from the start.  And yet LAUSD’s top brass stubbornly holds on to the idea that they can reboot schools by thrusting students, particularly poor youth of color, into the 21st century by handing over shiny new digital gadgets emblazoned with a partially eaten apple.

In our research on the incorporation of smartphones in classrooms we see a strikingly and unfortunately similar pattern to LAUSD’s venture.  The story routinely begins with adults who have high hopes that these devices will motivate students and will level the playing field across race and class lines.  Students are initially excited about these gadgets.  Who wouldn’t be eager to get a brand new iPad or smartphone?  But, when youth think of smartphones or tablets, they think YouTube, Facebook, music, and games.  As soon as they figure out that the devices are restricted, they have two options: work around the controls or resign to the fact that it really isn’t an iPad or smartphone, but instead a “device for school.”  Add into the mix, ambiguity about liability, and the grand plans of a 21st century classroom fizzle back into schooling-as-usual.

The emerging “crisis,” as students at Roosevelt High School and elsewhere hack their iPads for unrestricted access, is anything but unexpected.  The most shocking part of what is unfolding at Roosevelt is that it took a full week for youth resourcefulness to trump adult-imposition of security protocols on the iPads.  More importantly, these students’ acts of subversion bring the real crises in schooling and learning to light.  Educational equity in the city’s poorest schools cannot be bought with a hefty check to Apple.  Superficial bandages like iPads, however extravagantly expensive or cutting-edge they might be, can’t solve deep-seated institutional problems exacerbated by the District’s instructional policies.  For its part, District administrators stand by the iPad rollout, asserting the positives of getting technology into the hands of students and teachers, but will review the technology plan later this month in light of the recent developments.

LAUSD’s highly publicized missteps reflect problematic trends in education across the nation.  When it comes to technology in the classroom, policymakers and administrators chase two irreconcilable objectives: nurturing students’ ingenuity and tussling to control young learners.  They desire creative, inquisitive youth who access a world of digital information and teachers who skillfully facilitate authentic, individualized learning for all students.  Such a model of learning is based on trust in students and trust in teachers – areas in which District officials consistently score “far below basic.”

Performing drill and kill math exercises on a digital display or reading a pixelated version of The Great Gatsby does not prepare students for an increasingly complex and digitally-connected world.  Transforming the learning opportunities for students in the District is not as simple as diverting $1 billion to iPads.  Actualizing the transformative power of new digital technologies would require District officials to abandon their incessant and long-standing push for one-size-fits-all standardization and high-stakes testing that constrict and compartmentalize learning.  The rich potential of these devices is tied to students’ freedom to explore as learners and the professional expertise and flexibility of teachers as guides.  The District wants both control and creativity, which leaves them with little more than hacked iPads.

The political and economic ramifications of the District’s gamble will severely impact the residents of Los Angeles for years to come.  The iPads, with a life-cycle of a few years at best, were purchased largely with school construction bond funds meant for long-term infrastructure.  The District’s $1 billion indiscretion stands in a long line of decisions that has shifted critical funds from resources that support teachers and teaching.  Even before the expenditure on iPads hit headlines, LAUSD’s abysmal ratio of counselors, librarians, and other support educators meant dwindling opportunities and resources for creative and intellectually-engaged teaching in an era defined by API scores.  Now, the District and the public continue asking teachers to do an increasingly unfeasible, and by all means unsustainable, job while sending them the message that portable devices are more valuable than the educators who interact with students.

LAUSD fails to recognize that the meaningful incorporation of new digital technologies – distinct from a one-size-fits-all mandate to use a particular type of technology in a District of over 650,000 students – is just one component for providing the range of material and human resources teachers need to effectively support their students’ learning.

It’s time to realize the importance of investing in teachers rather than spending on Siri.  Perhaps then, more careers of passionate, thoughtful, experienced, and skilled teachers will outlast the life expectancies of iPads.

Thomas M. Philip, an Assistant Professor in the Graduate School of Education & Information Studies at UCLA and a former teacher in LAUSD, and Antero Garcia, Assistant Professor in the English department at Colorado State University and a featured blogger on DMLcentral, have worked closely on issues of educational equity and mobile devices over the years. Relevant co-authored publications by Philip and Garcia can be accessed at http://gseis.ucla.edu/people/philip.