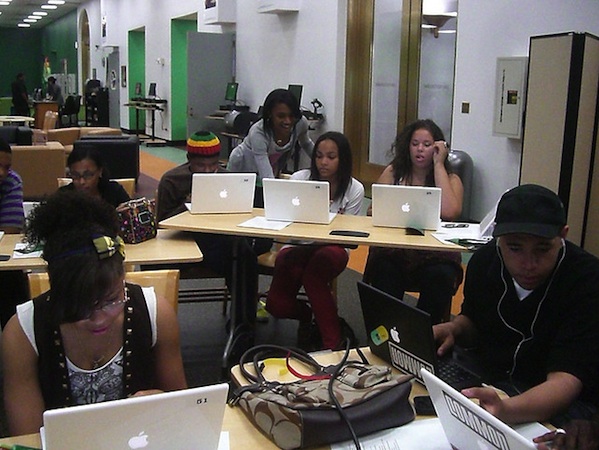 In some ways, this question is of course impossible. Given the difficulty of defining creativity in the first place with scholarship, trying to focus on the distinctions between what is new, what is expressive, what is individual and what is social, trying to work out what difference the digital makes may seem like splitting angels on a pinhead. However, it is equally impossible to ignore the fact that the last two digital decades have closely entwined ideas about creativity with our emerging understanding of how digital technology works in practice. I don’t want to focus here on the literature that explores the difference the digital makes to manufacturing or indeed to the reconfiguration of the global marketplace. I touched on some of those issues in an earlier blog. I have been interested for some time, as I study young people using digital technologies in and out of school and across a range of disciplines – video, web, music and design – and indeed engaging with digital culture along the continuum from lurking to social networking to full-blooded production, that being expert in one traditional discipline is no longer plausible and that if you are interested in say, music there is a good chance that you might develop and work in visuals as well. Furthermore, it is obvious that developing competence in the software associated with any one discipline actually means that you possess a wide range of generic skills to enable you to work in software associated with other domains. The most obvious example of this is the use of time-based non-linear processes across moving image and audio but equally principles associated with say, ‘layering’ or visual and audio synthesising modules.

At the same time there are obviously generic descriptions of the creative making processes across traditionally discrete disciplinary forms, as the traditional role of authors and artists have changed. Digital creativity has recalibrated the older image of the atelier or the studio so that specialised functions that were hierarchically organised between a master artist and his (or her) apprentices or indeed between the different departments in a larger production Studio are now roles that are mixed and shared by people across a range of digital creative industries. Again, to forestall criticism I am not suggesting that some role specialisation does not continue to exist but that for young people developing and working by themselves or with their peers there is much more fluidity in the roles found in traditional apprenticeships in the creative and cultural industries.

A number of scholars describing the ways that young people now participate in digital culture have of course suggested that rather than thinking of participation and making in terms of an on/off switch, it is better imagined as a continuum of engagement. Perhaps the best known of these principles is Mimi Ito’s work, Hanging Out, Messing Around and Geeking Out, which describes a recursive process of more intense engagement, imagined as a form of learning progression described in the words of the work’s title and which has served as a design model for some of the initiatives funded as part of DML, for example YOUmedia.

Reconceptualising the activity of engaging with digital media as a continuum suggests that it might be interesting to imagine other continua and thus to re-think the idea of digital creativity not in relationship to the difference that the digital makes to creative disciplines and domains but how the additive and intermixed nature of digital making, that I described above, actually leads to different hybrid creative processes that are particular and discrete to digital creativity.

With this in mind I set out to model digital creativity. The point of this exercise is to show the key dimensions and how they relate to each other: 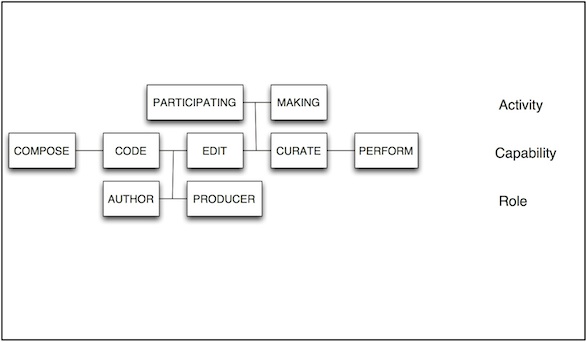 The dimensions of digital creativity

The top-line describes the continuum captured in the work of Mimi Ito and others which have been long preoccupied with analysing the ways that engaging in digital culture might involve different intensities of engagement over different periods of time and that people come to recognise ‘making’ as part of more introductory and seemingly passive modes of participation.

As I already mentioned above it is no longer accurate to describe the different roles involved in creative production in terms of job specialisation. Indeed many of us are interested in the ways that educating the next generation of creative workers requires a much wider range of roles than simple craft skills – for example supporting entrepreneurial and managerial abilities in addition to the discipline specific roles involved in art, design or music etc. Much creative production involves complex team work where you have to learn and understand aspects of skills not necessarily exclusive to your disciplinary training. Authoring has moved away from the Romantic notion of individual creativity back to its etymology which included ideas about origination but also of nourishing or developing as well as, intriguingly enough the idea of being a seller and of being in the marketplace. This continuum is the bottom line in the diagram.

The idea of generic capabilities comes about from an attempt to think through shared processes that derive from common software actions; but they are also conceptual and derived from research into multiliteracies. About 10 years ago Cary Bazalgette, who worked at the British Film Institute, suggested that the idea of ‘editing’ could perhaps stand as a master metaphor for creation in the digital era as a way of operationalizing some of the ambitions behind the idea of multiliteracies. Her argument was that editing is a process as common to writing as to filmmaking and that it might be an interesting innovation in curriculum and in pedagogy if a concept like this could be taught across more than one medium at the same time. Not only would this support conceptual understanding of the process of selection, manipulation and decision-making in meaning-making through comparison of editing across media, but it points to the way that digital creativity – or at least meaning-making in the digital era – brings together in the new ways processes that used to be separate and bound by academic convention. This insight has enormous potential for curriculum development as it suggests that common principles can be developed across media. There are indeed other key cross-media verbs of making that we can find quite specifically in different art form domains. We ‘compose’ music, a picture or write. The idea of code – which has had a particular high profile focus in educational politics at least in the UK recently – is not just confined to computer science but of course is a term frequently used in semiotics to describe aspects of genre. Coding is another such master metaphor. Recently there has been much attention to the idea of ‘curation’ as a way of describing high art practices but also the ways that young people harvest, select and develop profiles, preferences and identities. And of course the performative nature of digital creation through manipulation of identities, the capacity to speak and interact in online fora is yet another master-metaphor.

I’d be interested to know whether this model – although that may be rather too grand a term for a simple diagram – is missing anything, whether it is important or interesting and whether it organises the key dimensions of digital creativity in an appropriate or helpful way. It would be great to know if such a model might be useful for developing curriculum and for suggesting new ways of defining academic ‘subjects’ in the digital age.