Without a doubt, your 15-year-old daughter can text one-handed while holding her phone under her desk. Your 11-year-old brother leads his own World of Warcraft guild. Your fellow college students are Googling you during the first class you have together. And if you are the professor, you know that your lectures are now competing against the entire Web for your students’ attention. Without a doubt, today’s youth are tech-savvy. That doesn’t mean, however, that their proficiencies automatically grow into literacies, that they appreciate the lasting social implications of an inappropriate photo on Facebook, know how to use a blog as an e-portfolio or a platform for advocacy, understand how to evaluate the validity of what they find when they use a search engine. As a parent, a teacher, an avid user of digital media and participant in networked publics, I am one of those who feels strongly that educators and educational institutions should help young people understand the consequences of their social media practices in their own lives. Although pioneering teachers and librarians like Diana Rhoten, Will Richardson, Buffy J. Hamilton, and Meredith Stewart are igniting enthusiasm and guiding their students’ explorations of participatory media for classroom learning, youth adoption of new media has happened too quickly for institutions to react en-masse.

The introduction of social media into education as both an issue to be studied and a set of competencies to be mastered has been delayed by the lack of empirical data. Without systematic observation of what tech-savvy kids actually do in and out of school it isn’t easy to weigh the claims of enthusiasts against skepticism of those who correctly recall the magical thinking that accompanied the introduction of the personal computer into education. Fortunately, the
first large-scale studies of youth digital media usage are beginning to provide evidence beyond the anecdotal for claims that new media are transforming the way young people learn and socialize.

From 2006 to 2008, Mizuko (Mimi) Ito and the late Peter Lyman led the largest study of youth media habits ever conducted, involving 18 researchers who interviewed more than 800 young people and their parents, spent more than 5000 hours observing teens in online social network spaces. Jessica K. Parker, assistant professor in the school of education at Sonoma State University and one of the participants in what came to be known as “the Digital Youth Project,” based her book, Teaching Tech-Savvy Kids: Bringing Digital Media into the Classroom, Grades 5-12, on what the MacArthur-sponsored research found. 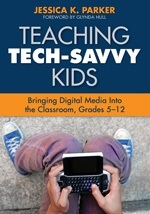 In the foreword to Parker’s book, New York University Professor of English Education Glynda Hull makes an important point: “A hallmark, then, of the digital practices described for us in Teaching Tech-Savvy Kids is that they originated in domains of play, work, and social activity outside of school. Learning what it means to come of age in a digital world – by documenting the social, literate, and creative activities of young people as they are mediated by the Internet, cell phones, social networks, multiple digital modalities, and a range of related tools and practices – is a super starting point, perhaps the most important one, for rethinking how to engage young people in traditional school settings and the knowledge of texts and disciplines to be acquired therein, and also in gaining insights into how such settings could themselves do with alteration and transformation.”

Mizuko Ito (who, it should be noted, is associated with this website, DMLcentral.net, and its umbrella entity, the Digital Media & Learning Research Hub) spoke at the Breakthrough Learning in a Digital Age event held at Google headquarters on Oct. 27 and 28, 2009, and observed: “The online world is where [young people] go to first for information, for social connection, and for learning, Are we taking seriously the kind of learning that they are doing online when they are going by their own learning agendas and when they are able to use technologies with the freedom to use them the way they want to use them? What we think about is how we limit and monitor kids’ access to online worlds and we think about how technology can reinforce our existing adult-centered learning agendas and institutions rather than looking at it from the kids’ point of view. I think it’s very important that we bridge this generation gap and that we start reframing these issues. Kids’ online peer spaces have tremendous potential as drivers of learning in a digital and networked age. I would go so far as to say that peer-based social exchange is the key to unlocking the full potential of learning in a digital age.”

I talked with Jessica K. Parker earlier this month, and began our conversation with the three big questions she uses to frame the beginning and end of her book:

1.  What does learning look like in the 21st century?

2.  What does literacy look like in the 21st century?

3.  What is knowledge in the 21st century? (Or what does it mean to
know something in our mediated culture?)