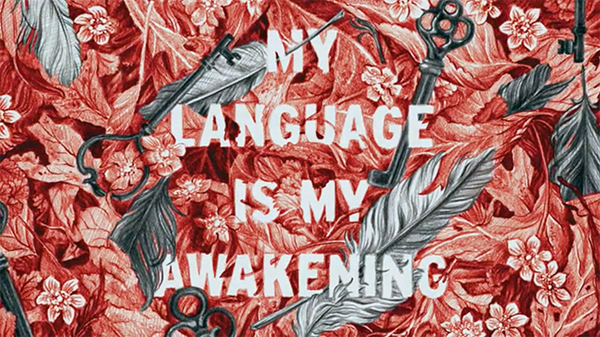 Recently, I had the opportunity to talk with game designer Kathryn Hymes about language, agency, and world building. As one half of the gaming company Thorny Games (with Hakan Seyalioglu), Kathryn is currently running a Kickstarter for a tabletop roleplaying game, Dialect, a game that encourages players to create a new culture and its language and — over time — imagine how the language gradually dies.

In looking at Dialect, I am particularly interested in how the flexibility of gaming allows players to move beyond traditional assumptions of what games can be and what games can mean. By the end of Dialect, players have built whole-cloth a thriving culture as well as the vocabulary that is at the heart of this group of individuals. Particularly reflecting on my conversations with both preservice teachers in Colorado and with multilingual youth while teaching high school in Los Angeles, the power of languages has been a predominant theme in how I look at and reflect on the promises of public education today. Dialect looks to me like a useful resource for working with learners, teachers, and friends to broaden perspectives about language and power in contemporary society.

Similarly, in our conversation, Kathryn also discussed Sign — a live action role-playing game inspired by the story of deaf children in Nicaragua creating their own language. As a game that is mindful of gesture and empathy as well as language, Sign is yet another playful opportunity for unpacking dynamics of language and power.

Kathryn and Hakan’s work at Thorny Games isn’t just a useful reminder of the possibilities of gaming. I see projects like Dialect as representative of a nuanced and particularly innovative form of connected learning. While Thorny Games is utilizing the tools of online communication and networking to spread awareness about their project, the game itself is one that requires unplugged reflection and face-to-face collaboration. As a product, Dialect is comprised of a book, a deck of cards, and the non-digital operating system of peer-collaboration. Sitting at a table, talking, building, and playing — the components of powerful game-based learning aren’t found in the digital tools of online games and social networks.

In discussing the power of “old school” role-playing games (the kind played often on tables with paper, pencils, dice, and other non-digital ephemera), Kathyrn alluded to games like Jason Morningstar’s Night Witches, another role-playing game that places players in the real-world setting of an all-female night-bomber regiment during World War II. Games such as these are useful reminders that rich and context-specific gaming experiences are only limited by the imagination of game designers and players. Even as we embrace the affordances of coding and digital game design, the rich forms of learning and engagement that we often expect to find online are possible with a few friends and a pad of paper.

Finally, in considering the playful knots of reading and using language to play a game about language and communication, I am reminded that just last month, I was advocating for the new forms of “compojing” online tools like Slack are affording society. Despite such playfulness, others see such changes as fretful.

Occasionally, a metaphor I hear bandied about when discussing the state of “Standard English” today is erosion. As if the shores of the contemporary are washing away the good and wholesome of our language, hand-wringers fret about the coastal state of what is happening to our language ecosystem (or something like that!). Dialect and Sign are reminders that languages are constantly evolving, growing, and emerging. If anything, these projects point to the importance of equipping teachers and students with the ability to build and work within such new systems of communication.