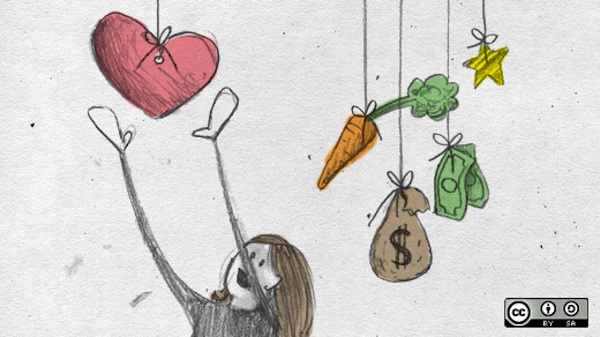 The language of learning today is full of references to “softness” and “openness.” Software, soft skills, soft performance, and the softening up of school knowledge go hand-in-hand with open source, open access and open educational resources in much current thinking about networked learning. How might this softening and opening up of the language of networked learning influence how learners think, perceive, feel and act? The emerging field of behaviour change theory suggests new ways in which networked technologies might be used as a form of pedagogical persuasion to influence and shape learners’ behavior, even at the unconscious or irrational level.

It is important to think about learning in terms of behavior change because all educational interactions affect how the learner thinks, feels, acts and behaves. In the traditional conception of school, the learner was invoked as a docile individual who turned up to school to be instructed in a core canon of curricular content and codes of behavioral conduct. Now, in our digital times, the learner is being reimagined as a more active, interactive, connected and collaborative individual—a behaviorally different species to the normalized learner of mass schooling.

The contemporary connected learner travels continually between formal and informal sites of learning, building networks of knowledge through the use of sophisticated software and the real-world application of soft skills, positive attitudinal dispositions, and behavioral competencies. For such a learner, the behavioral competencies of communication, perseverance, interaction, thinking skills, emotional literacy, empathy, problem-solving, and other personal attributes are now increasingly desirable in a world where more jobs will be recruited on soft performance criteria such as relationship management and customer satisfaction.

This represents a fundamental shift in the behavioral attributes imputed to learners, one reflected in an increasingly normative emphasis on a more soft, emotionally appealing form of schooling for the future. As opposed to the hard education of canonical core content, the softened school of the future does not impose rigid academic barricades against informal learning outside school. Knowledge is reconfigured as thematic, modularized, connective, boundary-free, hybrid, and generic. The kind of learner imagined within these webs of everyday pedagogic interactivity appears to be soft and malleable, armed with a toolkit of behavioral techniques enabling her to mold herself with dexterity, flexibility and adaptability according to the task at hand. Gone is the docile learner, passively awaiting the completion of her course of studies.

These softening trends in educational policy and practice have been accompanied by an emphasis on greater pedagogic openness, open systems of learning, and an emergent open educational commons. In the “open education” paradigm, educational materials are digitized and offered freely and openly to educators and learners to use, customize, improve, and even redistribute in their own teaching, learning, and research. Some major research universities, including MIT with OpenCourseWare and Harvard with its open archiving mandate, have pioneered open access as a way of bringing down the public barriers to research. Open education is an educational paradigm for a seemingly “open era” based not only on a technological discourse (open-source, open systems, open standards, open archives, and so forth) but on a change of philosophy that emphasizes ideals of freedom, civil society, and the public sphere. This is both open education and education for openness.

In more popular accounts drawing on conceptual and organizational models of openness, the idea of open education is typified by behavioral ideals of mass collaboration, clouds of creativity, crowd-sourcing, and wiki-thinking that are often associated with the alleged open source “solution” to everything from coding to stock markets to entrepreneurship to public policymaking. In the open education world learning is defined by choice and flexibility in educational provision and content, by notions of co-production, customization, personalization,and the co-design of new, open source forms of curriculum that follow the networked logic of wikis and not the narrowly canalized logic of cultural canons. In short, openness has been constructed potentially and ideally as a new way of life—a new behavioral norm—for the 21st century.

These various developments embody what I call “soft openings” in education. A “soft opening” means the initial launch or opening of a new exhibition, theatrical show or restaurant. In the educational context, I use it to refer to the soft launch of new educational ideas, theories or practices—prototypes, if you prefer, for new pedagogies, curricula, and educational institutions. What we are seeing today are the soft openings of prototypical approaches in education which themselves exhibit much greater emphasis on soft skills, soft performance, and software, and open access, open source, and open educational formats.

Moreover, however, this needs to be understood in terms of how pedagogic softening and opening up may be influencing and shaping learners’ future behavior. The soft openings we are seeing today are indications of emerging policies and practices of soft behavioral influence in learning.

Soft paternalism describes policies and practices which are designed in such a way that they are intended to subtly shape and change behavior. The official term for this is libertarian paternalism, as developed by the behavioral economist Richard Thaler and legal scholar Cass Sunstein (recently the Administrator of the Office of Information and Regulatory Affairs in Barack Obama’s administration). As a political and economic idea, libertarian paternalism represents a middle-way between complete libertarian freedom of choice and the hard paternalism of bureaucratic regulation, taxation and prohibition. It is libertarian in that it preserves freedom of choice, but paternalistic in that it tries to encourage, support, enable and steer people to make better choices for themselves in order to make their lives better—changing behavior without limiting choice.

Recently, the cumbersome term libertarian paternalism has been popularized by the more catchy expression “nudge,” as in the title of Thaler and Sunstein’s bestselling Nudge: Improving Decisions About Health, Wealth and Happiness. The idea is that “nudging” steers people to make particular kinds of choices. Using carefully designed “choice architectures” it is possible to nudge individuals and populations to behave in certain kinds of ways rather than others—for example, to buy and eat more fruit, to cut out tobacco and alcohol, or to drive more slowly in built-up areas. Nudging strategies deploy sophisticated techniques derived from the psychological and behavioral sciences in order to manipulate individual and societal behaviors and perceptions at a subconscious or irrational level. This is known as changing behaviour without changing minds.
These claims have begun to seriously influence governments on both sides of the Atlantic, as indicated by the market-nudging strategies of Obamanomics and a major project entitled MINDSPACE on behaviour change theory and public policy in the United Kingdom. MINDSPACE represents a mnemonic of non-coercive behavior change techniques that are recommended as a checklist for policymaking:

Messenger: we are heavily influenced by who communicates information
Incentives: our responses to incentives are shaped by predictable mental shortcuts such as strongly avoiding losses
Norms: we are strongly influenced by what others do
Defaults: we “go with the flow” of pre-set options
Salience: our attention is drawn to what is novel and seems relevant to us
Priming: our acts are often influenced by sub-conscious cues
Affect: our emotional associations can powerfully shape our actions
Commitments: we seek to be consistent with our public promises, and reciprocate acts
Ego: we act in ways that make us feel better about ourselves

These cues and influences offer us a novel way of thinking about ourselves and our behavior. Such theories are encouraging us to view ourselves as irrational, automated beings whose behaviors are being subtly nudged by forces and powers acting below our conscious perception.

As these kinds of nudging strategies and their choice architectures have increasingly been translated in public policy, it is argued that the apparatus of a new kind of psychological state is being built. A psychological state is defined by the setting of new behavioral defaults and the foreclosure of norms of “good behavior” according to the psychological and behavioral expertise of a new breed of “nudgeocrat.” Yet the nudgeocratic ideals of soft paternalism can just as easily promote inappropriate decisions and supplier bias, create cognitive errors, contribute to the formation of harmful behaviors, and lead to the stigmatization of behaviourally recalcitrant social groups, as it can encourage personal responsibility and well-being. Nudging is also, potentially, politically manipulative, reconfiguring government as an agent of persuasion. These soft paternalistic powers of persuasion have been evident in the funding of media columnists to promote particular government policies and programs, including educational policies such as No Child Left Behind.

Can the nudges of soft paternalism be felt in the networks of digital media and learning? The implications of soft paternalism for thinking about digital media and behaviour influence are acute. Increasingly, it is being recognized that persuasive technologies have become part of our everyday experience, as shown by kinetic gaming devices which persuade us to move our bodies and by social networking sites which persuade us to divulge our personal lives online. There is growing emphasis on designing persuasion, influence and nudging into computing devices based on diagnostic techniques which, behavioral experts claim, can perform a “mind x-ray” on our behaviors. Through networked devices, we are being nudged from a distance. This makes it important to ask questions like: What are the choice architectures built in to digital media? What forms of persuasion are put into software code? What behavioural defaults are programmed into new digital pedagogies? And what psychological and behavioral theories are scripted into the latest designs for human-computer interaction?

The softening and opening up of schooling are part of this soft paternalistic family of subtle behavior modification strategies. The learner enmeshed in digitally mediated networks is forever being nudged from afar rather than instructed; subtly tutored instead of lectured; her behaviour itself mediated through coded webs of affiliations, affinities and associations rather than restricted through regulatory powers or directed through didactic techniques. We are seeing the emergence of a much less coercive education environment, based on emerging ideas about how we behave as we do when we are situated in dynamic, networked, open environments, and the programmed techniques of persuasion which script our interactions in such environments.

There are clear family resemblances here between the soft paternalism of behavioral change and more soft and open notions of learning. Of course, a field as rich as open education cannot only be reduced to a new middle-way nudgeocracy. Yet the issue remains that as the language of 21st century learning becomes increasingly saturated with new “open” and networked formats and new “soft” behavioral competencies it may become hard to distinguish from the soft control techniques of behavioral optimization programs, soft performance, and other political strategies of subtle psychological persuasion. Your digital devices may no longer just chime and vibrate—they might nudge you.