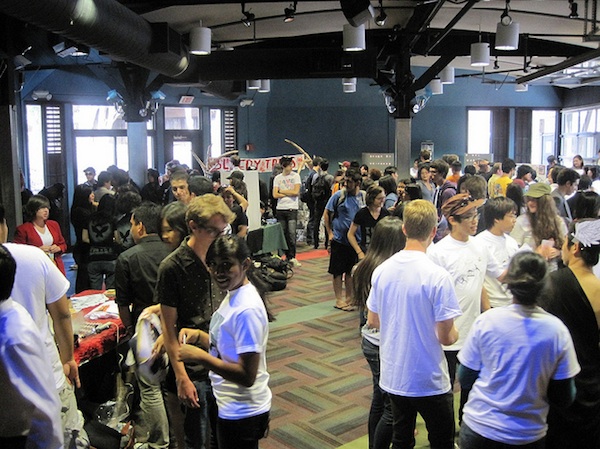 In March of this year, as I taught my winter lecture class that focuses on Public Rhetoric and Practical Communication Online, I began to receive urgent e-mails from students about a viral video produced by a group called Invisible Children, which my undergraduates implored me to watch.  A number of the messages came with warnings that it would require thirty minutes of my time and attention.  A typical cautionary message read as follows: “you should really watch the whole thing in one go, so set up a good chunk of time.”

So I made sure to wait until the end of the day, when there weren’t any other distractions, to watch Kony 2012, which has now garnered over ninety million views on YouTube.  It’s also inspired considerable meta-spectatorship, since over a million viewers have watched kids just reacting to the video and its message about apathy and activism for human rights in Africa.

The Kony 2012 video makes the case for using international forces to capture Joseph Kony, the leader of the Lord’s Resistance Army, a Ugandan guerilla group known for compelling child soldiers to serve its perverse causes.  To structure the visual argument that equates online participation by individuals with public protest by masses of people, creator Jason Russell draws on a number of sources.  Russell’s short film includes screen capture shots that show frenetic sharing of material from social media sites, home movies of the birth of his son, sequences of this same child as a preschooler being quizzed about Joseph Kony, documentary footage shot in Africa, animated maps and information graphics, interviews with legislators and human rights advocates, and a commercial for an “action kit” that includes advocacy bracelets, stickers, and posters to support a street art campaign to expand Kony’s most wanted visibility.  Those familiar with the software program Adobe After Effects will also notice its distinctive visual rhetoric and the repeated use of 2-D photos of Kony and his soldiers that have been transformed into 3-D images.

Of course, despite the impressive number of people who have seen the Kony 2012 video, it is still far from the top of the YouTube most watched Hall of Fame.  Videos of biting babies and Lady Gaga dancers far surpass Kony 2012 for total viewership.  But there is no doubt that the Kony video’s longer length and the earnestness of its surrounding social media discourses do make it notable.  See this report from the Pew Internet & American Life Project for some preliminary analysis of the demographic patterns of its audience and the observation that youth engagement seems more linked to online encounters with its message than to watching on traditional media.

So why didn’t more people respond to the video’s call to action, which encouraged viewers to take part in a culminating “Cover the Night” event on April 20th publicly shaming Kony?

Those who followed the story know that almost as soon as the video went viral, questions emerged about its credibility, even from people like this YouTube personality who Tweeted it enthusiastically at first.  Some thought the naïveté of the Kony 2012 planners showed from the very beginning, when they chose 4-20 as their date for internet-driven activism, given the association of that day with marijuana subculture.  Others were skeptical about calls for intervention by U.S. military advisors in a foreign country and didn’t like the oversimplification of the conflict as well as the undervaluation of the importance of political institutions in African nation-states.  In a world of global media, Ugandan vloggers like this woman were heard questioning the currency of the Kony 2012 narrative and the Euro-centric focus of its rhetorical appeals.  Online sites like Uganda 2012 for “trending our own stories” were created to counter the depictions of Africans as lacking agency or rhetorical ability. 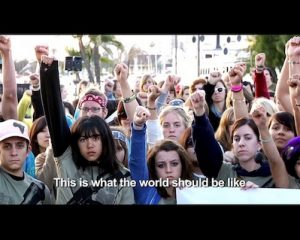 Once the story was picked up by the U.S. mainstream media, where many over thirties first heard about Joseph Kony, questions about the Invisible Children organization’s high salaries and lack of transparency hit the headlines.  Former insiders from Invisible Children soon were criticizing the excesses of the organization and the “overrated” label soon began to stick.  In mid-March filmmaker Russell was detained by police and then hospitalized after a bizarre episode in which he was videotaped behaving erratically while naked in public.  Fortunately for Invisible Children, this celebrity meltdown didn’t become fodder for remix and parody on YouTube in the same way that footage of David Hasselhoff’s drunken cheeseburger consumption or audio of Alec Baldwin’s abusive phone call to his daughter made the rounds.

However, not every voice in the human rights community was uniformly critical of the Kony 2012 campaign.  Sam Gregory of Witness pointed out in an online essay on “Juggling Activism and Agency” that the video did smartly emphasize concrete actions and a clear narrative that could be spread more easily.  Even foreign policy experts argued that there were “lessons for the Obama administration” to be learned.

Yet when little happened on the morning of April 20th beyond a few posters in shop windows and a few chalk drawings on sidewalks, how should we interpret Kony 2012 in the digital media and learning community?  Should the lackluster response be a negative lesson about how so-called “digital natives” view Africa with too little specificity to move from “slacktivism” to concrete actions of protest or a positive lesson about such young people’s critical thinking when it comes to the credibility of sources on the internet?  What can teachers learn about how students learn informally about history, geography, and civics that could be brought to the formal classroom context?

Lesson plans from The Guardian and The New York Times emphasize how students could go to news stories from print journalism to become better informed citizens with a deeper understanding of the Acholi war or the rise of the Lord’s Resistance Army.  A lesson plan could also probably be drafted from Larry Magid’s column in The Huffington Post about investigating the authenticity of claims made by online charities.  Given the importance of information graphics in news literacy for readers of all ages, students could also try to do in-class critical analysis of the abstract simplifications on LRA Crisis Tracker, which is another information arm of Invisible Children.  They might also assess the more hopeful views about youth engagement expressed by Neta Kligler-Vilenchik in light of what they actually observed in the behavior of their own peers who moved toward disengagement during the very month in which the movement to action on the streets was supposed to build.