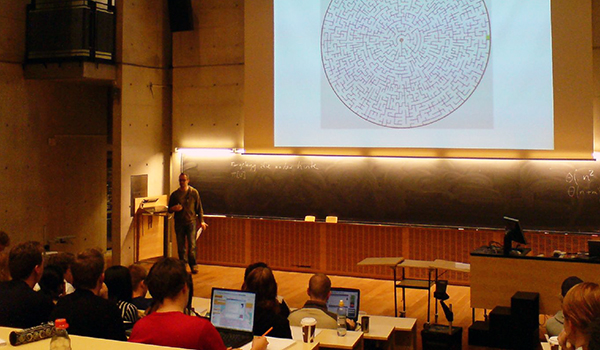 It’s starting to seem like there is a new ritual being performed at the beginning of each new semester: debating the use of technology in the classroom. In these debates, “technology” almost never means all human-made tools — I’ve yet to read an earnest blog post calling for a ban on pencils in the classroom — but rather portable electronics, most notably the laptop.

Perhaps the most prominent voice calling for a ban on laptops is that of Clay Shirky, a new media scholar. Last fall, he posted an article to Medium explaining why he forbids portable electronics in his courses. Shirky’s post gained a lot of attention, perhaps because he is best known for his books about Internet culture and the collective benefits of social media. This was not a hoary old professor telling kids to take their newfangled devices and get off of his lawn, but rather a prominent voice in the technology community rejecting the devices that enable the culture he studies.

In the piece, Shirky describes how he slowly changed his mind about the use of laptops, tablets, and phones in class, a change that was fueled by research into the detrimental effects of multitasking and computer use in the classroom. The crucial turn for Shirky was this study that argues, as the title says, “Laptop multitasking hinders classroom learning for both users and nearby peers.”

Shirky doesn’t respond in any depth to the reasons why laptops should be allowed in the classroom. (I don’t fault him for it, necessarily; his wasn’t a position piece as much as it was a conversion story explaining why he, new media scholar Clay Shirky, became convinced that laptops are bad for learning.)

The arguments for laptops fall in roughly two camps: the first, articulated here by Steven Krause, might be called the “live and let live” approach. Students didn’t start being distracted in class with the introduction of laptops, so instructors are better off addressing the root problem: making their courses engaging and interesting. The second defense is student-centered, arguing that professors need to accommodate a diversity of learning styles in their classrooms. Some students must have laptops to assist them in their learning, and a general ban on these and other devices (with exceptions for students who need them) would draw unwanted attention to these students.

These defenses are both compelling in their own right, but then so is that research on multitasking and distraction Shirky cites. As he puts it,

Anyone distracted in class doesn’t just lose out on the content of the discussion, they create a sense of permission that opting out is OK, and, worse, a haze of second-hand distraction for their peers. In an environment like this, students need support for the better angels of their nature (or at least the more intellectual angels), and they need defenses against the powerful short-term incentives to put off complex, frustrating tasks. That support and those defenses don’t just happen, and they are not limited to the individual’s choices. They are provided by social structure, and that structure is disproportionately provided by the professor, especially during the first weeks of class.

As Nathaniel Rivers points out, Shirky almost completely ignores pedagogy in this article. While this paragraph addresses learning and course structure, he doesn’t address or attempt to justify the learning modes that banning laptops is meant to protect.

The assumption of his argument is that the classroom is a place where mostly lectures (and some discussions) happen. I do not doubt that portable electronics provide unique challenges to lecturing; but is this narrow definition of the classroom — a place where an instructor delivers knowledge to students who must pay attention — one we should be defending from these increasingly ubiquitous technologies?

For example, in that article on multitasking that Shirky credits with convincing him to ban laptops, the authors describe two experiments. In the first, they had students listen to a 45-minute PowerPoint assisted lecture while taking notes on a laptop. Twenty students would simply take notes, while twenty more were also given other tasks to complete during the lecture when they could. Afterward, the two groups were tested on what they learned. In the study, the twenty students who were not assigned the additional tasks scored eleven points higher on the test.

In the second experiment, students were assigned to multitask with laptops, while two additional groups of nineteen students each were given pen and paper for note taking during a lecture and either placed in view of the laptop users or where they could not see them. In this experiment, the group that could not view the laptops scored seventeen points higher on the comprehension test than did the group that could see the laptops.

It has been known for some time that multitasking degrades task performance. However, this study seems to show that watching someone multitask degrades comprehension as well. It is not clear how this effect applies to students using laptops to take notes: the effect was only measured on students who could see others with laptops while taking notes with pen and paper.

Putting aside the small sample sizes and other limitations of the study, this all seems quite damning. Yet, what goes unremarked on in the study is how abysmally all of the students did on the comprehension tests. Only one group had a mean average above a D — the pen and paper, no-laptops-in-view group averaged a 73%. One could argue that this result suggests the group performed along a bell curve — that is, they were average, scoring right in the middle of the grade scale.

But, we aren’t talking about students with a full course load and normal pressures: we are talking about a small group of students who listened to someone talk for under an hour and then immediately took a test on what they heard. That group was just barely able to average a passing grade. One might suggest this pen and paper group was best suited to comprehend the lecture — that is, the lecture in its current form evolved to serve handwritten notes — but then one wonders why the shoddy outcomes of the lecture format are worth defending. That is, there may be a higher ceiling for classroom education than a 73% average on a quiz.

Put as a question, why must we ask the 21st century to wait outside our classes? Is it just to protect the lecture? We know what a classroom designed around lectures, notes, and quizzes can do, and it is not impressive. Shirky may be getting the best out of the students in his lectures by forcing them to leave their laptops behind, but maybe both he and they can do better. Perhaps by embracing the new forms and structures of communication enabled by laptops and other portable electronics we might discover new classroom practices that enable new and better learning outcomes.

There is a robust body of research exploring alternatives to the lecture. Never before has technology been so able to support a new understanding of learning, but as Rivers argues, suppressing the use of new technologies avoids and ignores such discussions. There is a network of concerns at work here: what is the value of pedagogies like lecturing? What is the value of attention-structuring activities like note-taking? What role do emerging communication technologies have in mediating pedagogies and attention-structuring activities? The goal of the instructor should be to balance these concerns and push forward to discover new ways of learning.

As the title of this post suggests, I’m not for banning lectures, either. What I am for is pedagogies that are nimble and responsive to a range of needs and outcomes for both instructor and student. The lecture has its place. Asking students to close their laptops has its place. But, failing to explore new possibilities for education prompted by emerging technologies does not serve the interests of either group.