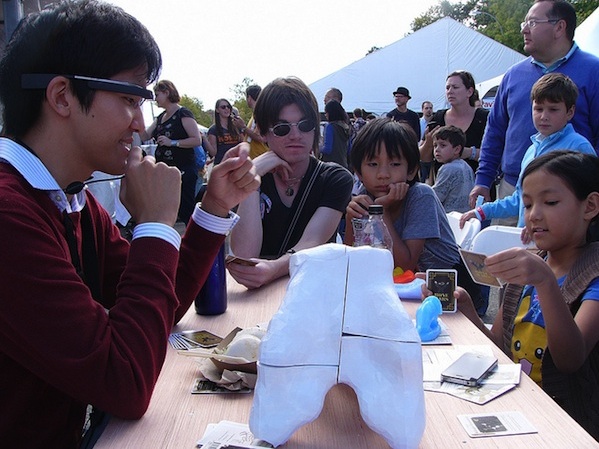 I have a question for you. What do you think is going on in the photos I’m including in this post? They were taken last month at World Maker Faire NYC. And it fascinates me (Full disclosure: I worked the booth in the photo so I know the answer). 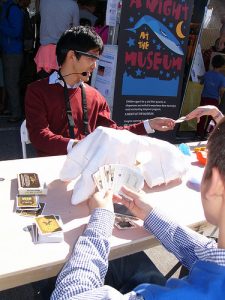 Okay, I’ll tell you what I see and how it captures the “separated at birth” story between the Maker Movement (“Makers”) and the Digital Media and Learning (“DML”) communities. But first, about the photos.

Let’s see if I can do this in one sentence: the pictures show Aki Watanabe, a paleontologist and doctoral student at the American Museum of Natural History’s Richard Gilder Graduate School playing and critiquing a card game about the history and practice within his field with college, high school, and elementary school youths while filming it with Google Glass, talking about his recent dig in Mongolia, and playing over a giant 3D-printed Allosaurus skull developed (with the same youth shown above holding the cards) in a summer program that scanned dozens of bones in the Museum’s collections to build a complete dinosaur.

If you can handle the mixed-metaphor, this to me is a perfect marriage between Makers and DML. But why that is so interesting requires some recent history. In a nutshell:

In essence, both emerged at the same time and, in just a few years, spread around the country.

The Maker Movement and the DML Initiative always have had a lot in common: the respect for the self-learner, the importance of peer validation within a community of interest, and how digital tools empower new ways to learn, create and share, just to name a few examples (And both grew, of course, out of disparate activities that have been around for some time, such as shop class in schools and video production in youth media programs; what I’d prefer to focus on here, however, are these two parallel attempts to organize and direct these activities). At the same time, their origins were quite different. One came from a non-profit foundation (MacArthur) and the other from a commercial publisher (O’Reilly Media). No grant is required before declaring oneself a maker. You don’t need to do research or develop a theory of change – you just learn by doing, by designing, through iterative practice (And depending on your point of view, we can be talking here about a strength or a weakness).

When MAKE magazine launched the first Faire, it was the beginning of formalizing, albeit in an emergent, chaotic way, the boundaries of the community and moving it beyond a magazine readership. When the MacArthur-supported Digital Media and Learning Research Hub launched the first DML Conference, it was the opposite, the first opening up of what had previously been a closed, invite-only community of grantees. The two have been moving towards one another ever since.

As I reflected on all this during Aki’s presentation, as I worked the first American Museum of Natural History booth at the NYSCI-hosted Maker Faire, it was hard for me not to notice how differently our institutions had responded to the Makers. NYSCI not only plays host to the Faires but launched a permanent, year-round Maker Space within the museum, incorporating it into their identity. That doesn’t mean that the American Museum of Natural History doesn’t offer Maker-type activities – we do, as they were on display in our booth – but previously we had not viewed our work through this lens. At the same time, both institutions have embraced digital media and learning practices. NYSCI and the American Museum of Natural History were both founding members of the Hive NYC Learning Network and amongst the first financially supported from its Digital Learning Fund (each successfully returning time and again for more over the years). So why did our history split over Makers but unite over DML? And what does it mean that in support of our first ever booth at Maker Faire, dozens of individuals from around the American Museum of Natural History collaborated, from across a number of departments, to offer a wide range of science-based Maker activities?

I learned about the Maker Movement at the first DML conference. I think it was a session on e-textiles. And it felt refreshingly out of place amongst all the research-driven panels. But things have started to change within the DML community. There was the opening up of funds through innovative and strategic partnerships with HASTAC, the Institute of Museum and Library Services, and the Mozilla Foundation. There was the growing appreciation that spread through Mimi Ito’s work on youth learning that making with digital tools – a game, a video, an album – is a type of making. And the aforementioned Mozilla Foundation became the new home for the Hive NYC Learning Network and, this year, of Chicago’s and Toronto’s as well.

At the same time, there were efforts within the Maker Movement towards expanding a DIY community into one leveraging DIY pedagogy for learning. On one hand, you have the annual Mozilla Festivals, where they replace “darkened lecture halls with hands-on sessions and interactive workshops” and they wear as their motto, “less yack, more hack.” On the other hand, Dale Dougherty, Founder of MAKE magazine and co-creator of the Maker Faire, was central in setting up the Maker Education Initiative, whose mission is to “create more opportunities for young people to make, and, by making, build confidence, foster creativity, and spark interest in science, technology, engineering, math, the arts – and learning as a whole.” And yes, along with Intel, Cognizant, and Pixar, and others, MacArthur is one of their key supporters.

This convergence hit the stage at the annual DML Conference this year, when MacArthur’s Director of Education Connie Yowell and Mozilla Foundation CEO Mark Surman gave a joint Ignite talk with the hard-to-repeat title “Why the F*ck are Mozilla and the MacArthur Foundation Working Together?” It becomes even more clear in one of MacArthur’s latest partnerships with Make-to-Learn. Make-to-Learn describes itself as “an effort that leverages DIY culture, digital practices, and educational research to advocate for placing making, creating, and designing at the core of educational practice.” I can’t imagine a better example of Maker and DML combined, revealing the underlying DNA that connects the two. Rafi Santo, who works on Make-to-Learn, pointed out to me that the Maker movement is in certain respects the grassroots movement (and identifiable “brand”) that the DML community has never had, and that DML offers the pedagogical frameworks and in many ways the legitimacy (through partnerships with researchers and longstanding educational institutions) that greases the wheels for Maker to enter existing conversations about learning.

So let’s return to the image at the top of this page. What does it mean that we could combine games, 3D printing, dinosaur bones, multi-generational play, youth-produced media, and a real live paleontologist in one event?

I actually can’t say, because what interests me more is that our booth united people throughout the Museum who are coming to understand how Maker-oriented practices might actually be able to teach science and perhaps describe something we already do. Beyond what you see in the photo, we had youth making animal origami, we had a Mexican paper craft called Papel Picado, we had 3D printers producing dinosaur bones, and we had scientists from throughout the Museum talking about how the tools of digital fabrication are helping them to advance our understanding of the world.

I wonder if the photo above represents a process coming full circle, of Maker culture and DML practitioners coming together.

What do you think?