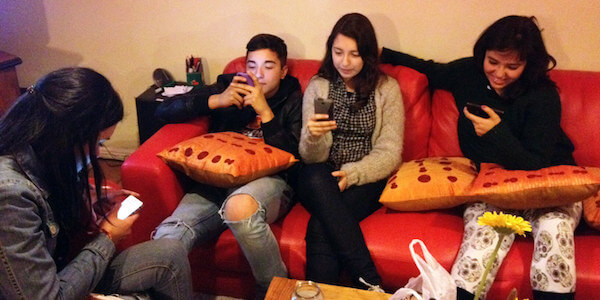 We first met the class at the end of a sunny afternoon in July in the quiet of a London suburb. We found ourselves addressing a blur of teenage faces turned expectantly towards us. We explained that we wanted to find out how they lived their lives at school, at home and online, about their friendships and their learning. We quickly got a conversation going. Who, we asked, used Facebook, and who had a mobile phone? Most hands shot up, although one boy made a point of saying “no” to Facebook. Some faces were animated, some were blank, and they began nudging and whispering to each other, as curious about us as we were about them. 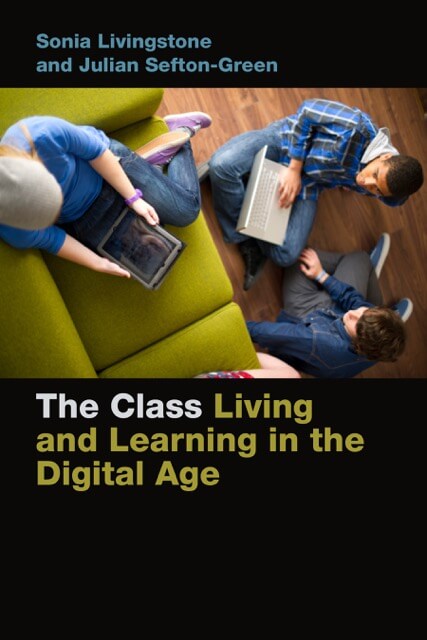 This is how Julian Sefton-Green and I begin our new book, The Class: Living and Learning in the Digital Age, based on a research project in the Connected Learning Research Network (CLRN) funded by the MacArthur Foundation’s Digital Media Learning initiative.

As we observe in our opening chapter:

On that first sunny afternoon, each student looked alike in their school uniform, and although we had interrupted their lives in full flow, we had no idea of their histories of friendship or hostility, achievement, or struggle. Gradually, they became better known to us over the year we spent with them and our book unpacks the first impressions on which much of social life is based, to reveal the deeper patterns, influences, and relationships.

This knowledge is the researchers’ privilege. After all, teachers often know little of the students out of at school, and some don’t know them well in school either, so first impressions, even stereotypes, may have lasting effects. Then, a child known so well to their parents can appear very different at school, and it became important to our research method to note the different personae that children projected, or were known by, in different settings.

By mapping continuities and disjunctures in our experiences of the class across settings, we sought the connections and disconnections that mattered to them and those around them. How are their lives shaped by themselves and others? What opportunities and constraints do they face, growing up in these early years of the 21st century?

Our book is about a class of 13- to 14-year-olds at an ordinary urban secondary school in London, England. It is a famously tricky age, difficult for parents and teachers, and for the young people themselves. In conducting the research, we became increasingly curious about what young people want, how do they see the world, and how do they find a path through the opportunities and constraints they face?

We found that, while much depends on them, it also matters how they are supported or undermined – by parents, teachers and communities. This, in turn, depends on a society that is fast changing, questioning what it can or should offer young people. So, our book has to address some big questions. In today’s hyper-reflexive risk society, problems of social inequality, along with processes of globalization and individualization, make for considerable uncertainties about the future. Parents, teachers and young people themselves are grappling with crises of confidence about the role of the family, contested visions of educational goals, and a host of anxieties about changing values and potential loss of tradition.

The Class shows that, while parents and teachers often have young people’s best interests at heart, they do not always agree on what these best interests are, leaving young people let down by the broken pathways offered to them yet not sustained across home and school. Meanwhile, young people are trying to find their own way, not necessarily seeing eye to eye with their parents or teachers and even avoiding beneficial opportunities so as to maintain “positive disconnections” — offline and online spaces to pursue their own meanings and experiences away from the gaze of parents and teachers.

Boundaries and Limits of Networked and Connected Learning

We observed the students’ social interactions in and between lessons, conducting interviews with children, parents and teachers in order to understand how digital networks may be underpinning — and thereby enhancing or undermining — young people’s social and learning networks in the digital age.

Our work is part of CLRN and inspired by its vision that:

We hope that many children and young people will benefit from the diversity of educational initiatives and innovation taking place in the name of connected learning, networked learning, blended learning and more.

But, let me here consider two kinds of challenge.

One is political. Avril Loveless and Ben Williamson note that efforts toward collaborative opportunities to share and learn, providing technological tools to engage with knowledge resources online, along with building learning pathways that support interest-driven learning sound as if they are in students’ interests, but that we should be wary. They point to a convenient alignment between the language of connected learning and the commercial interests of the edtech industries who stand to increase profits the more students are encouraged to learn on their services.

What is the future that this prepares students for? Is it really collaborative and fair or, instead, is it a competitive, individualised future in which workers must be flexible and adaptable to survive in an insecure and unfair labour market? Neil Selwyn implores us to resist the rhetoric of inevitability and certainty that accompanies the explosion of education technology and ask critical questions about pedagogy and educational values.

In our book, we discuss how parents try to support their child in facing a precarious future, even while feeling ambivalent or divided in their assessment of the value and values of digital media learning. This leads us to the second — empirical — challenge.

What we found striking in our fieldwork (for example, here) was the resistance we encountered to the idea of connection from teachers, parents and especially from students themselves. We learned that young people are often motivated to maintain more than overcome boundaries (reminding me of the anthropologist Marilyn Strathern’s observation that families may need to “cut the network” rather than endlessly extend it, to manage commitments to others realistically, and to protect vested interests).

In my own research, I try to respect children’s voices and experiences. So, when I hear of their concerns about ever-increasing connections (undermining their ability to self-manage spaces of privacy, intimacy and even transgression), and when I see their efforts to manage their networks (i.e. to keep them under their own control, not to be harnessed by teachers, however well-meaning), I become concerned about educational policies designed to link home and school even more.

Children do a lot of their learning outside school — whether via YouTube, Khan Academy, or a host of other online and offline resources. Should that be recognised and developed in school? Are we missing a trick if we don’t, especially for children who learn better or different things out of school and so their potential is underestimated in school? Or, as I discussed in the run up to the 2016 Networked Learning conference), do efforts to connect home and school inevitably mean imposing the discipline of school onto children’s learning experiences.

I observed one very bright girl doing her homework, having been told to look on the internet for answers to the set questions. But, she had been given questions that had correct answers and she was told to visit just one site to get them. So, while she and the teacher called this “independent” learning, to my mind it was highly teacher-led and involved minimal investigation, exploration or evaluation from the student. I wonder what appetite there is among educators to refashion homework to support creative work, whether contemplative or collaborative?

Another problem we explore In The Class is that of social inequality. We saw how when a middle class child learns music or sport or digital media production or whatever it is, they (or their parents) are likely to find a way for this to be known by the school, and then the school can recognise and develop that knowledge. But, when a poorer or more marginalised child learns something out of school, it didn’t always fit the school learning environment so well (e.g. the child learns Arabic instead of French, guitar instead of piano, boxing instead of football). Nor are the parents or child always able to connect that knowledge to the school in productive ways, as Annette Lareau argued. In effect, connections across home and school can become a source of social reproduction rather than social justice.

Digital networks make learning processes visible in new ways. Traditionally, when students searched for information in a library of printed books, their search process was hardly visible, mainly to be inferred from the results of the search. Now, the very process of search is visible. This opens up analysis of how students try, fail, recoup, start again, persist or give up, etc. This can be analysed, even graded, of course, and the benefits of learning analytics are still being explored. But so are the costs.

In her book The Culture of Connectivity, Jose van Dijck argues that we are already shifting from a culture of digital connections (which operate peer to peer, among people) and digital connectivity (which operates between users and systems, especially corporately owned ones). Using her terms, connection brings surveillance of young people from teachers and parents. Connectivity brings surveillance from commerce (and the state). For the most part, it’s the former that most bothers young people. For critical social scientists, the latter is equally if not more problematic.

In short, the promise of connected learning is considerable. But, it is at risk of being “curricularised,” of serving the cause of social reproduction more than that of social justice, and of being co-opted by corporate interests and institutional surveillance in ways that may lead students to resist rather than participate.