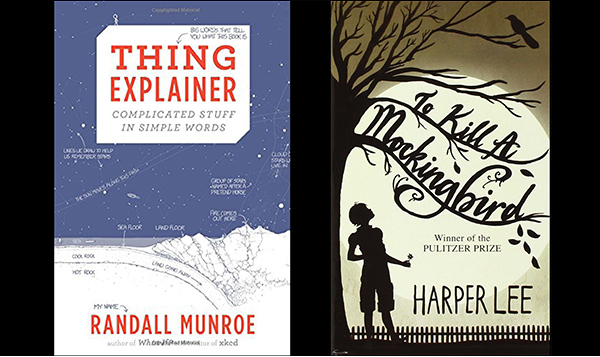 Let’s talk about how knowledge is valued and dispersed in schools today: last week, two stories percolated in online media that related to the kinds of texts that students will encounter while in schools.

First, notable web comic author and best-selling author Randall Munroe’s work will be excerpted in forthcoming textbooks for high school students. As the author of the recent “Thing Explainer,” Munroe’s simplistic illustrations function exactly as their title implies; using basic vocabulary and clear line art, Munroe’s book explains things. From a submarine (i.e. “Boat that goes under the sea”) to the Large Hadron Collider (i.e. “Big tiny thing hitter”) to the U.S. Constitution (i.e “The U.S.’s laws of the land”), “Thing Explainer” is an entertaining book I’ve seen enrapture both kids and adults.

At the same time that the announcement about Munroe’s work appearing in forthcoming Houghton Mifflin Harcourt textbooks was added to the abundance of tabs in my browser, I also noticed two interrelated announcements regarding Harper Lee’s classic novel, “To Kill A Mockingbird.” First was a general outcry that the affordably-priced, mass-market paperback version of the text is being discontinued. Shortly after this announcement, HarperCollins — Lee’s publisher — announced that a discounted version of the classic novel will be offered to schools.

With two noteworthy announcements related to the texts that will be funneled into classrooms, it is time for us to more deliberately discuss what goes into the black-box of curriculum development in schools, how teachers build on these texts, and, ultimately, who profits from this work.

Toward New Forms of Knowledge Consumption

On the one hand, I am personally excited about how the inclusion of Munroe’s texts signal an academic embrace of myriad forms of textual production. What counts as scholarship and as valid means of communication are being defined within the pages of textbooks today. Like online shifts to video and images, the inclusion of Munroe’s texts highlight how composition and argumentation are embracing forms of writing that extend beyond traditional, standard English.

Yes, Munroe’s name is most widely connected to web-comics; it is possible to imagine some of our nation’s nerdier teachers integrating a digital component alongside these comics. However, more importantly, Munroe’s comics are significantly minimalist by nature. These works emphasize a simplicity of communication and focus on the intersection of words and images for conveying complex ideas.

Limits, Profits, and a New Canon

In a recent blog entry for the Association of Research Libraries (ARL), Krista Cox argues that the inflated costs of books like “To Kill a Mockingbird,” are a consequence of the U.S.’s excessive copyright terms.

While HarperCollins seemed to gain back some favor by announcing the discounted price of Lee’s novel for schools, the announcement begs broader questions about profit and canon in schools. On the one hand, it is clear that the millions of copies of “To Kill A Mockingbird” that circulate daily in classrooms across the country continue to make an abundance of money for Lee’s estate and for her publisher. The ARL blog rightfully points to the ongoing challenge that creators, remixers, and consumers of media struggle with today vis-à-vis copyright laws. Likewise, the stories that came out last week about “To Kill a Mockingbird” highlight how — even at a discounted rate — public schools funnel a lot of money to a small number of publishers.

Likewise, we can imagine that the article announcing Houghton Mifflin Harcourt’s inclusion of Munroe’s clever images point to this textbook publisher’s heightened relevancy in comparison to other available publishers. If anything, both of these cases remind us that a small number of companies — from textbook publishers to standardized testing agencies — profit significantly within the tightly controlled ecosystem of public schooling today.

I would be remiss to note that — rant set aside for another day — I’ve never been a huge fan of teaching “To Kill a Mockingbird.” While the dialogue around race, equity, and understanding a complex world remain relevant today, I’ve found more success as a high school teacher with a broader set of texts.

The vitriol spewed at the announcement of the discontinuation of the cheaper version of Lee’s novel conveys that this is a beloved text today; again, the nationalizing force of public schooling probably helps the novel retain this status. However, we must consider how works of literature and art attain canonical status in today’s pluralistic society. Will “Thing Explainer” be the next great American book? Is Lee’s novel destined to remain entrenched in high school curriculum for the foreseeable future? In today’s digital, participatory culture, what kind of malleability exists in what is treated as canonical and “required” reading today?

As a brief postscript, this blog entry originally began as a rather rambling meditation utilizing Anchor, an app that promotes sharing and responding to ideas via voice memos. While I will likely devote an entire post to unpacking the value of one’s literal voice in digital contexts, I encourage readers to respond both to this post and to the original Anchor post here: