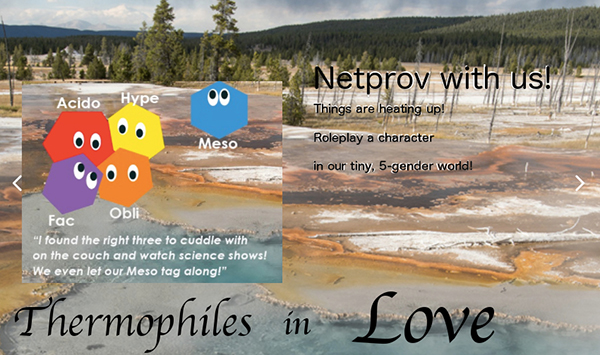 I’m no longer surprised when new media trends turn out to be rooted in decades-old practices. Netprov — networked, improvised storytelling in available media — is a “new” media form that actually goes back to the early days of computer-mediated communication (decades before the term “social media” emerged). Improvised storytelling online was one of my early joys when I discovered text-only conversations on BBSs, Usenet, MUDs, Compuserve, The Source and the WELL in the early 1980s. At that time, I called the practice “writing as a performing art.” A comment thread sometimes started out as or turned into a story that emerged from the sentence and paragraph-long contributions of various community members in different parts of the world. All these years later, I can’t recall the plot line of any of the stories, but can vividly recall the thrill of matching wits, collaborating, and playing with a new communication form.

This is what I wrote in my book, Tools for Thought, published in 1985: “Then there are folks who are starting to use temporary online communities as art forms and as experiments in changing the consciousness of larger communities like neighborhoods and cities. In 1983, a literary group in Seattle that called itself Invisible Seattle instigated the creation of a fifteen chapter mystery story written by a representative sampling of the half-million citizens of the city itself. The collective novel was not a new form, as far as the more standard kinds of networks go. EIES started a serial years before, in which different writers took on the personae of various characters and wrote the story like a conference. Invisible Seattle, however, sent “literary construction workers” out into the city looking for people from all walks of life who were willing to contribute plots, words, ideas, which were communicated from the point of origin to the other nodes throughout the city via a temporary arrangement of video arcade game parts, two larger personal computers, some custom written software, and six smaller personal computers.”

So, I wasn’t surprised to learn that one of the chief instigators of Netprov, circa 2017, is Rob Wittig, associate professor at University of Minnesota, Duluth…and a citizen of Invisible Seattle. Although text was the only medium, we had available in the 1980s for real-time (IRC, AOL chat, IMs) or asynchronous (BBSs, Newsgroups, MUDs, forums) networked narrative, today’s palette is considerably richer, including Tweetchats during sporting events or breaking news, streaming video on Facebook or Youtube, images, memes, GIFs, sounds, videochat. Together with Mark Marino, associate professor of teaching at the University of Southern California, Wittig describes today’s Netprov:

An emerging new kind of literature can also be fun, right? Before I knew it was being called Netprov, I enjoyed following fake twitter accounts such as Kim Kierkegardashian, who tweets a mashup of Kim Kardashian and Soren Kierkegaard. And, tweetchats related to hashtag streams related to blog posts related to “daily creates” have all been part of the kind of connected learning that went on with the Connected Courses MOOC, ds106, and the most recent Elements of Networked Narratives. Now that I look at where Wittig and Marino are pointing, I can see the thread that connects, the interweaving of improvised media around a common context, narrative, dialogue. Improvisation is about making it up as you go along, about saying “yes, and” to the choices presented by others, to making connections as threads emerge, to allusion and wordplay and image-play, to the kind of fluidity and openness that has been more characteristic of conversation than publication.

Just as improvisational theater is recognized as a legitimate dramatic form, Netprov is a legitimate literature, with its own multiple literacies. It can be serious literature. It can be fun. It can be social. It can be pedagogical (or peeragogical). And Netprov, despite its ancient roots, is still in the process of forming and norming. In this short video, I talk with Marino and Wittig about what Netprov is and where it’s going.