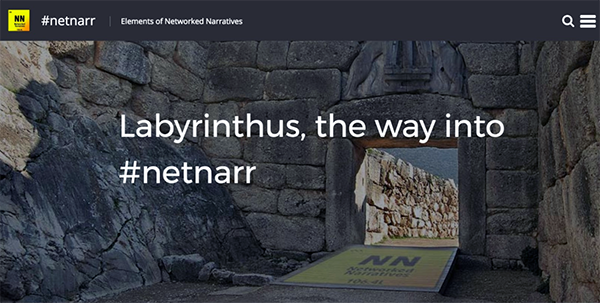 In our last script published here, we approached our Networked Narratives course (@NetNarr) in an emergent fashion. This next installment considers how students explore digital identity via a number of role-play activities, influenced by a few outside mystery characters.

Designing for Emergence, The Screenplay, Part 2

(A slow dissolve into a view over Alan’s shoulder in a video call with Mia. It’s the summer of 2017, and he sees the bright light coming through the window behind her in New Jersey. Likewise, the warm Arizona light coming in his window lights up his face. The camera shifts between over-the-shoulder views during their conversation).

Mia: It’s so nice to sit back and reflect on the Networked Narratives course, there is so much we ought to share.

Alan: I totally agree! But, summer is flying past, and soon you are on your way to Norway for your Fulbright year.

Mia: Don’t remind me, I have so much to do. But, this reflection is important as we look forward to teaching a new iteration in Spring 2018, where we will have parallel classes with you teaching #NetNarr at Kean while I am with new students at the University of Bergen.

Alan: That’s going to take #NetNarr to a whole new level. I thought now we might trace the way our ideas of world building and role-playing developed.

Mia: Yeah, I think we received an early dose of inspiration at the DML conference last year when we started to consider the idea of “civic imagination” as a way to address current societal problems. The keynote from Constance Steinkuehler was really memorable, and the conversation between Henry Jenkins and Jose Antonio Vargas was another key reference point for our thinking. 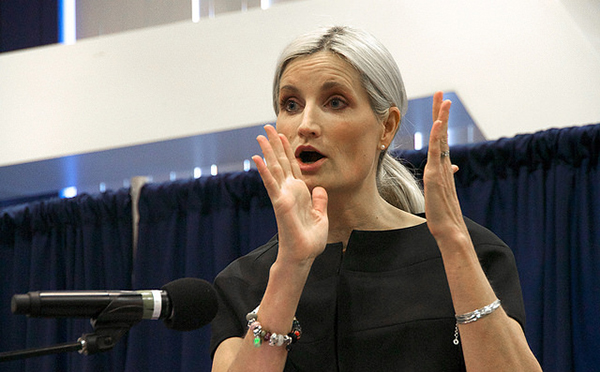 Alan: True! And, I rarely get excited about keynotes.

Mia: Ha! I remember we were throwing out wild ideas of our class digging into the harder issues via digital storytelling and building an imagined world.

Alan: At the time, it was rather fuzzy. It wasn’t really specific in the sense of 3D design or building games, but we were definitely interested in a world of the mind from the start. I remember having this notion of students imagining a near future world, like one generation away, where they could address the biggest social problems — the problems that they grapple with today.

Mia: Yes, and our idea was that they could build a story together, realizing a whole new world — one built out of their struggle with the world of the here and now.

Alan: Looking back on this now, I can see that we were probably pretty ambitious. In the end, we took a different world-building direction.  And, according to our course spine, we left our world-building for April when the mirror world of #Arganee was formed.

Mia: Still, all along in our thinking was the idea of role-play. And, I think this idea was more nuanced than what is typically thought of when considering a rather flat notion of “acting.” I think that in imagining fictional characters, we were able to re-imagine ourselves — with different skills, abilities, ambitions, and perspectives.

Alan: I’ve always thought that the core of any good story starts with depthful character development. So, when we developed alternative personas, it was the right starting point I think. Rebeg Maestro and M. Prophetissima were born of our imagination, but a more depthful understanding of their significance did not really arise until we let them live a little in/on the open web. 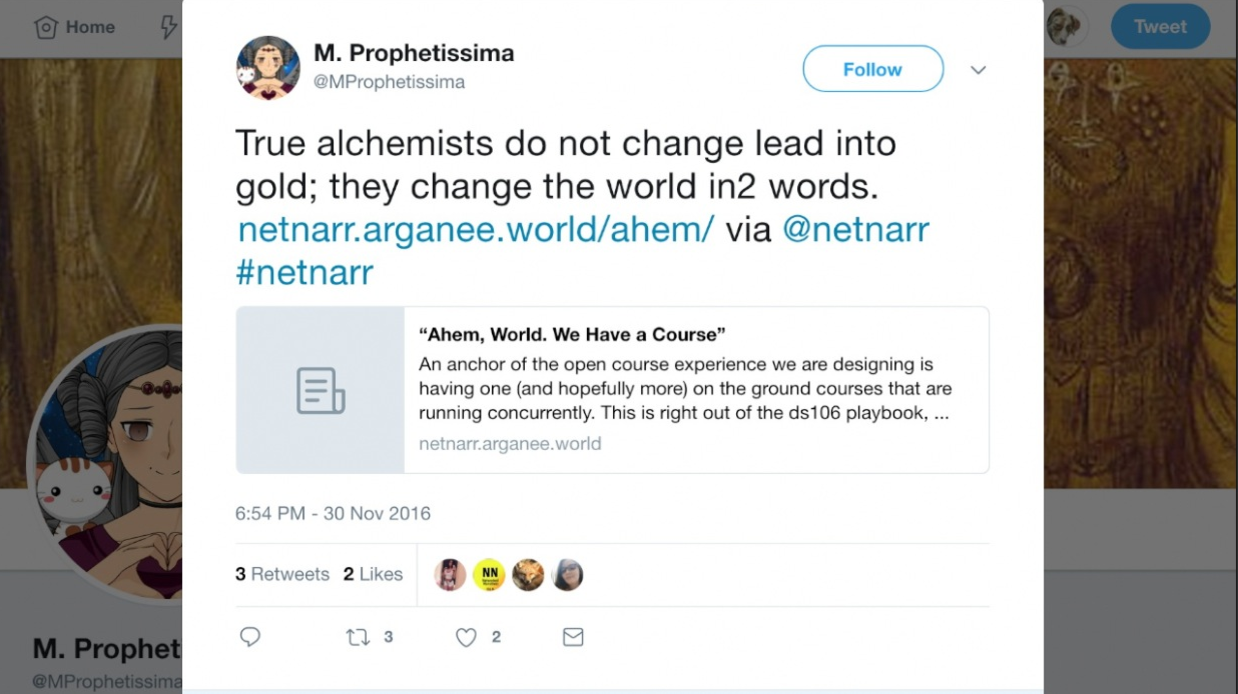 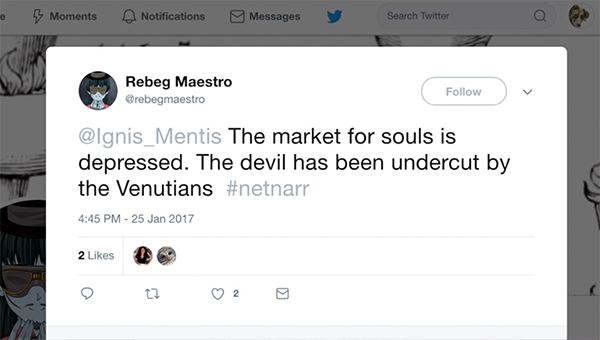 Mia: I agree. When Rebeg and M came on the scene, these strange alchemist-based personas helped us realize how important roleplaying-as-invention and discovery was going to end up being for everyone. You are so right. They were indeed born of our own imagination and inspiration. But, sometimes we were worried about them, and sometimes we were not sure of their intentions. When Rebeg and M started to interact with us, that is when we improvised best with layers of meaning, and that is when the magic of our collective imagination really started to pave new pathways to learning. You know, by building our characters together, we/they opened up a space for more creative collaboration in the course. And, I am sure the other critical component to our early design was asking everybody to consider what it might mean to be a “digital alchemist.”

Alan: And, what a stroke of good fortune that we invited John Stewart from the University of Oklahoma into our Slack-planning channel. Not only did he and Keegan Long-Wheeler help us out with designing via gamification, but John just happened to have a Ph.D. in the history of science. As an expert in the history of alchemy, he really helped us dig deeper into the world of alchemy as our shared starting point.

Mia: I learned so much from John in that early twitter chat we hosted exploring the history of Alchemy. I think that this public conversation set a critical stage for our #NetNarr notion of becoming a 21st century digital alchemist.

Alan: Yes, and from there we were able to build in our own special identity/role-play concept. There was something aspirational about being challenged to “breathe life” into one’s own digital alchemist character. It was a critical design invitation — each #NetNarr participant created their own digital alchemist. And, over some time, we were able to get to know each of those alchemists even better, because they were being developed with real insight. The mirror world of #Arganee was really born with this new crop of digital alchemists at the center of our growing community. And, twitter really did become a fun place for us to be.

Mia: So true. I think it was a playful kind of schizophrenia-scape that seemed to emerge. Our #NetNarr participants were getting to know their own (self-created) #Arganee alchemists. Twitter really worked as an open space for creative imaginings in conversation. It certainly became the key locale for the convergence of different digital identities — both real and imagined.

… You know, the timing of this is interesting, as so many of our esteemed colleagues are now grappling with the concern that twitter is not a safe place. It has certainly gotten much more ugly, especially for women and people of color.

Alan: This year has sure tainted my optimism. I’ve been reading of people who are saying it’s not safe, so they are moving to private spaces such as Slack. And, Slack works very well if you seek a discussion space for your students only.

Mia: Slack is a very useful tool for group meetings and planning conversations with an invited community. But, we were seeking ways for our #NetNarr students to understand both the problems and the possibilities of open-networked spaces. We wanted them to reach beyond the four walls of our classroom. They could not have authentically considered the risks and affordances of the open network if we remained within the bounds of a closed network.

Alan: I agree that it is problematic to require all students to jump right into twitter without establishing some understanding of the choices we have. But, at the same time, it seems just as arbitrary  and also limited to declare that everything should happen in a private space.

Mia: The risks that exist in open networks are real, and we are all grappling with these concerns, but I still think that open and public production of new knowledge can be beneficial and empowering. But, there are precautions that educators must take. Your idea was great for a choose your own adventure game for setting up twitter and blogs. It gave students a clear understanding of the choices they could make in setting up their digital platform accounts. It also made a good case for not selecting usernames or URLs with identifying information.

Alan: I have to thank our mythology guru Laura Gibbs for helping come up with names for the URLs that would not give away their meaning. For example, you might not know that http://netnarr.arganee.world/labyrinthus/circulus/harmonia/ is the page with information about using an existing twitter account.

Mia: I think it was of critical importance that we gave everyone options regarding twitter accounts. They could create a new account or use an existing one. And, the same kind of choice existed for setting up their blogs. If they chose to create a new account, we suggested that they use a name that is not explicitly associated with them so that there might be a layer of protection. Emphasizing these kinds of choices in creating a platform for digital identity is important.

Alan: You will not find “cogdog” on my license or my birth certificate. But, this kind of practice is not an ironclad rule either. It is your choice to use your real name for your blog and twitter account.

Mia: Yes, there are all kinds of reasons to establish your own name, or to build a reputation under a new name. But, we gave our students choices, not rules.

Alan: For our Kean University #NetNarr students, six chose a username that contained their first and/or last name. Two students played a bit with a variation on their real name, and seven students chose twitter names with no direct connection to their real name.

Mia: That’s a mix down the middle! It is an interesting break down regarding the choices involved in designing a digital identity. And, some students already had existing alternative identities developed, which they then extended into our #NetNarr world. They had even further practice in both the affordances and constraints of identity building in the digital world. #NetNarr participants built and learned via both real identities and imagined ones.

Alan: And, this was just the beginning, it got really crazy in April when we entered the world of #Arganee. Students had to create an alternative character to inhabit and even talk to themselves and each other.

Mia: We doubled our class size! We should talk more about #Arganee soon.

…Stay tuned for Act 3 in which Alan & Mia discuss the role of improvisation in collaborative writing and collaborative teaching (i.e. #netprov & #teachprov)