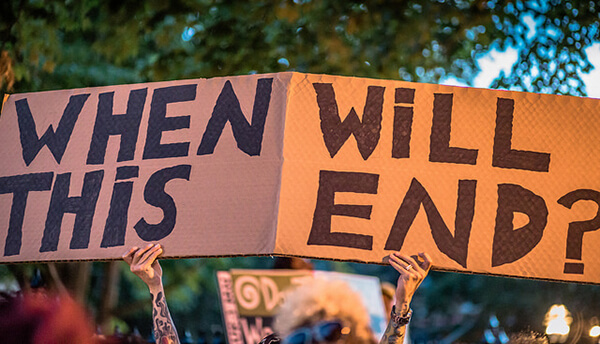 Like many of you, I cried on Wednesday as I watched Alton Sterling’s son cry for his daddy a day after he was murdered by the police of Baton Rouge. I watched that teenage boy and I wept in sadness, anger, and exhaustion.

I watched that teenage boy knowing what Roxane Gay wrote later that day: “We have to bear witness and resist numbness and help the children of the black people who lose their lives to police brutality shoulder their unnatural burden.”

And, while mainstream media spent the day in a cycle of did-she-or-didn’t-she about Clinton’s email “scandal” and Trump’s continual onslaught of racist rhetoric and iconography, I sought solace — like many of you — online with other folks around the globe. Together, we were angry, hurt, and wary that — without rapid and systemic change — Alton Sterling would be yet another name on the list of black men and women being murdered in this country.

We couldn’t openly mourn for 24 hours before this happened again. Recorded live by his girlfriend, the world witnessed the anger and violence of a police officer who took Philando Castile’s life Wednesday night.

Like many of you, I woke up feeling hopeless and tired. I feel like the work we do doesn’t actually make the lives of our black and brown children any safer. What good are the grants and peer-reviewed articles and apps and standards that invest so much of the DML community’s time if we can’t even keep black lives safe in the U.S. today?

Often, when I work with educators, I discuss the fact that, if you teach long enough, sooner or later one of your students will die. And, particularly in urban communities, the possibilities of our students dying from gun violence are very real.

Today, we need to remind ourselves that the inverse is true: teach long enough and, sooner or later, some of your students will become police officers and they carry with them the very real power to “take your body.”

For me, today, I am wondering how we talk to teachers and to students about the growing list of individuals killed by the police. How do we talk about the life-and-death responsibility some of our future students will seek? How do we move beyond the language of personal responsibility to supporting students to hold our officers accountable when, as a society, we are clearly failing at doing so?

To be clear, it is not enough to simply teach youth how to safely navigate the spaces of their community. In a Thursday morning interview on CNN, Philando’s mother, Valerie Castile said she had taught Philando how to survive being stopped by the police: “That was something we always discussed: comply … Whatever they ask you to do, do it. Don’t say nothing. Just do whatever they want you to do. So, what’s the difference in complying, and you get killed anyway?”

To be even clearer, there is no way to read these continual killings as anything but racist. Whatever excuses we can come up with cannot justify the persistent killing of black people in this country.

As a DML community, we cannot pretend that our actions (and inaction) function within a bubble isolated from a world of systemic violence. On Wednesday morning, I ranted on Twitter about the media literacy lessons that are lacking in how we market black and brown bodies in educational literature:

2. I get what the image and text are trying to do. I even think they are the right message. The context, however, is not. @anterobot

3. In light of the current socio-political nature of U.S. education, we are already thriving at helping black & brown youth fail. @anterobot

4. Waking up to this image from @XQAmerica in my inbox hours after the death of #AltonSterling is horrifying. @anterobot

5. There’s a colonial narrative to the role of grit and failure that the ed community have not properly faced. @anterobot

6.I get the purpose here & think @XQAmerica‘s #rethinkhighschool effort is in the right place, but there is a missing racial gap. @anterobot

7. If we want to #rethinkhighschool we need to think about how we are ALREADY failing the black and brown youth in schools today. @anterobot

8. In light of #altonsterling and the other 500+ the police killed this year, let’s ask whose dreams died today. @anterobot

9. Who gets to “fail” when #blacklivesmatter is something debated and argued today? @anterobot

10. Critical media literacy means reading images like these within the political context they are read. @anterobot pic.twitter.com/neQgzltOce

As I continue to seek solace and build understanding and action alongside others, I am also questioning the words I am writing, the lessons I am teaching, and the ways my work in this community intersects with the life-and-death needs of youth I work for. I am hoping you are doing the same.

Note: this post was written in the hazy and upset hours the morning after Philando’s death. The ongoing terror and violence that took place Thursday night in Dallas and seeps into the present are terrible and need to be mourned as well. The deaths of Philando and Alton are not reasons for escalating violence. The shootings in Dallas also neither change nor excuse the actions of the past. We have a lot of work to do.