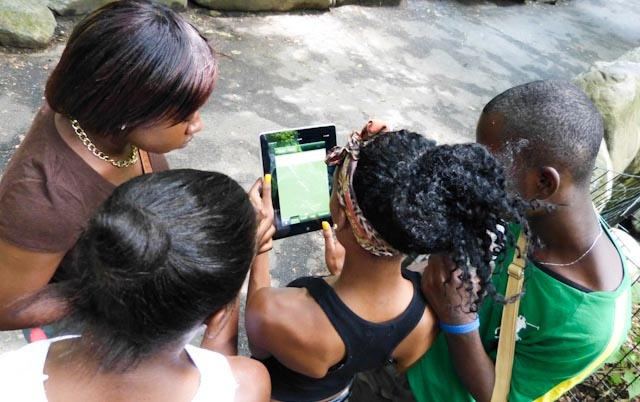 For two years I have worked with my team at Global Kids to highlight some of the best online resources that inspire digital media and learning projects. It has been some time, however, since I made a new post. I am excited to share the reason why: I am now working at the American Museum of Natural History as the new Associate Director For Digital Learning, focusing on on-site, youth-oriented programs.

I look forward to shifting the focus of these posts to highlight the most inspiring online resources I can find about digital media and museum-based learning. Before we make that transition, however, I would like to look back at Global Kids and highlight some remarkable resources Global Kids has released onto the Interweb in recent months.

DIGITAL BADGING
In the summer of 2012, Global Kids, Inc. launched a beta test of its planned digital badging system. The test was designed to provide feedback on the system to support a fall launch throughout the entire organization. This Global Kids’ Badging System is built on top of Learning Times’ BadgeStack and is part of a broader badging network within the Hive NYC Learning Network (funded by the MacArthur Foundation). This report, produced at the end of the summer, highlights some of the initial findings (and a shorter version was prepared for the Joan Ganz Cooney Center). What they learned, in summary, was that the badges played a positive role in the development of their summer programs, engaged the youth, and offered them different learning pathways. It provided them with valuable opportunities to name, reflect upon, value, and share what they learned in the program; offered Global Kids unusually rich examples of youth’s perceived learning; created a new and useful assessment relationship amongst the organization and the youth served; and collected measurable data about youth’s learning outcomes. That’s pretty amazing for a beta test run over just four weeks. A great context for this work is provided by the group at Indiana University led by Dan Hickey, analyzing the grantees within the MacArthur Foundation’s Badges for Lifelong Learning competition, in posts like this one.

EDGE WORK
A second report released in September focused on the results of their two year-long series of collaborations, which aimed to expand the capacity of civic and cultural institutions to use digital media as innovative educational platforms that engage youth in learning and promote youth civic participation. Also funded by the MacArthur Foundation, The Edge Project was interested in these institutions bringing cutting-edge digital media into their youth educational programs. The project was equally interested in where this type of programming can be a disruptive force challenging the educators and/or the institutional cultural to work on the edge of their comfort level. At the end of the day, they wanted to better understand the following question: How do institutions find their balance working on this edge? Some of the projects hit their marks (“It was incredibly successful”), while others, frankly, failed to live up to initial hopes (“I’d say we barely met our original expectations”). All, however, offered valuable learning to the participating institutions regarding working on their edge points of digital media and learning. The report offers a high level overview of the concept, the partners involved (four libraries, four museums, two youth jails, and one after school provider), and three case studies, or worked examples, of particular edge projects. One of these worked examples also just came out as a chapter in the book The Participatory Cultures Handbook (edited by Aaron Delwiche, Jennifer Jacobs Henderson) in a chapter I co-wrote with Kelly Czarnecki entitled “Leveraging Digital Media to Create a Participatory Learning Culture Among Incarcerated Youth.”

CONNECTED LEARNING
Connected Learning has been discussed in a number of places, but I think the best overview has been in a recent piece in Education Week, which did a fantastic overview of what these ideas about learning in the 21st Century look like in practice. And of their main examples was the work done this past summer at Global Kids, in which youth used a geolocative gaming tool to engage their peers in NYC and around the country in a combo scavenger hunt/race addressing issues within the current Race to the White House. As a follow-up to the article, I then did a webinar with Michael Levine, executive director, the Joan Ganz Cooney Center at the Sesame Workshop, to address “Teaching 21st-Century Skills Outside the School Day,” which is now a video that can be seen at your leisure.

LAST BUT NOT LEAST
Last but not least, I posted a few final reflections as I wrapped up my work at Global Kids. One was an opinion piece in the Forward about the relationship between adults and learners in a connected learning environment, “Digital Learners Can’t Do It On Own,” (beware the myth of the self-directed learner!) and another was my “12 Lessons After 12 Years” post summarizing my key take-aways as I prepared my transition, one for each year.

They are, in summary:
1. Youth Care.
2. Youth Voices Matter.
3. New Literacy Frameworks Are the Key To The Future.
4. The Fast Track To New Literacies Is Youth Digital Media Production.
5. Avoid The Myth Of The Self-Directed Learner.
6. Educators Are Still Trying To Figure This All Out.
7. Find Your Edge Point Then Work It.
8. Make Connections: Person to Person.
9. Make Connections: Institution to Institution.
10. Make Connections: A Network of Collaborators.
11.The Workplace Can Be A Praxis For The Change We Want To See.
12. Youth Come First.