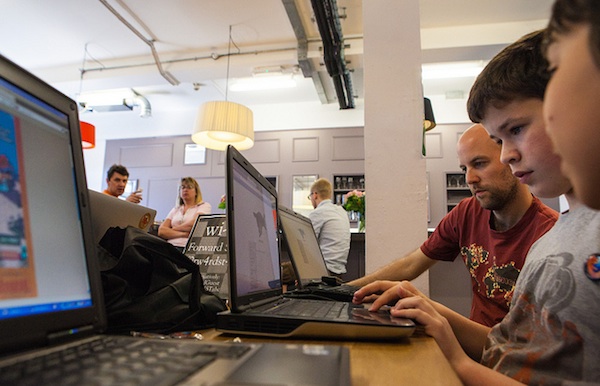 I’ve come to realize over the last couple of years just how important the Open Web is for online innovation. It’s a standards-based platform that allows anyone to use relatively low-cost technologies to connect things and people together in new ways. It’s radical in its egalitarian, open, and democratic approach.

But it’s under threat.

When Steve Jobs announced the original iPhone only five years ago in 2007 he emphasized the importance of getting Web browsing right on a mobile device. Hot on the heels of the announcement, of course, came the wildly successful App Store. A few days ago Tim Cook, the new CEO of Apple, announced that this is now “an economy in and of itself.” And, despite the App Store’s popularity, this is an ecosystem where Apple take a 30% cut and decides what is and what is not made available to end users.

At least with Apple there is an obvious monetary transaction taking place. You choose to purchase an Apple device and you choose to purchase various apps vetted for inclusion in the App Store. With Facebook, and to some extent Google, however, it’s a different story. Their services are provided ‘free of charge’ to the end user. No money changes hands (ordinarily) between you and these publicly-listed companies who, at the end of the day, exist to provide shareholder value. What is being sold to advertisers, of course, is your attention and your online habits.

What concerns me, and I am fully aware that I may come across as a tinfoil hat-wearing conspiracy theorist at this point, is that much of our online interaction takes place in public but privately-owned spheres. Twitter, despite being seen as helping revolutionaries, is no different in this respect. If you fall foul of the rules, if an organization takes a disliking to you (or your pseudonym), then you’re out. You’re on private land using tools that may be revoked at any time. Oh, and those tools are increasingly non-user-upgradeable, proprietary, and closed-source.

I came across a great quotation towards the end of a Wired magazine article about Apple’s new MacBook Pro. Now I’ve nothing against Apple or their devices — I own several myself — but the following sums up nicely how we’ve lost our way:

We have consistently voted for hardware that’s thinner rather than upgradeable. But we have to draw a line in the sand somewhere. Our purchasing decisions are telling Apple that we’re happy to buy computers and watch them die on schedule. When we choose a short-lived laptop over a more robust model that’s a quarter of an inch thicker, what does that say about our values?

Every time we buy a locked down product containing a non-replaceable battery with a finite cycle count, we’re voicing our opinion on how long our things should last. But is it an informed decision? When you buy something, how often do you really step back and ask how long it should last? If we want long-lasting products that retain their value, we have to support products that do so.

Today, we choose. If we choose the Retina display over the existing MacBook Pro, the next generation of Mac laptops will likely be less repairable still. When that happens, we won’t be able to blame Apple. We’ll have to blame ourselves.

We’re being turned into an audience, an audience that passively consumes a shiny, commoditized, ersatz version of the Web in return for a veneer of sociality, connection to celebrity, and/or perceived ease of use. Meanwhile, our data is being sold to the highest bidder, we’re becoming used to surveillance and a lack of privacy, and any digital skills we had are atrophying.

There is another way.

Thankfully, efforts are underway to avoid the next generation being one of consumption over creating. The Mozilla Foundation (which I am proud to be joining next month) is campaigning for a ‘generation of webmakers’ to come together to make something amazing with the Web. This summer a huge effort is underway through a Summer Code Party to help people young and old take their first steps in learning to code a little. You can find out more and get involved at Webmaker.org.

You can learn see how web pages are put together using X-Ray Goggles, learn the basics of code using Thimble, and even create amazing hyper-video mashups using Popcorn. All of this is free, open, and provided by a non-profit organization steadfastly against Web users being tracked.

Will you join us to help protect it?