If you agree that the best teachers help students learn how to think, Dr. Nick Sousanis’ extraordinary hybridization of words and images, “Unflattening,” ought to be one of your texts. Indeed, “unflattening” struck me as an ideal metaphor for the results an ideal teacher should expect: the opening of learners’ minds to new ways of seeing the world as well as the acquisition of knowledge. Written as an Ed.D. dissertation for Columbia University and published by Harvard University Press, “Unflattening” combines words and images that not only tell but show how visual perception actively shapes our understanding of the world, how skillful, “bilingual” combinations of texts and images can convey understandings that neither form alone can communicate, and how drawing — for everyone, not just those designated as artists — is an exercise in thinking.

While I’m telling you about the connections between seeing, drawing, and thinking that “Unflattening” makes vividly clear, why not also show you? Here’s a quote in the form of pure text (p 81): “We understand the new in terms of the known, forging new knowledge by stitching together the dissimilar, an activity Stafford likens to ‘the imaginative labor of making a coherent mermaid,’ and suggests it’s an inherently visual process, this action of seeing in relation, of differentiating and drawing connections. There is no single, objective view. From a multitude of views, we constantly create perception. Fixing our viewpoint interrupts the dynamic relation that is seeing. Perception is not dispensable. It’s not more decoration or afterthought, but integral to thought, a fundamental partner in making meaning. In reuniting thinking and seeing, we expand our thinking and concept of what thinking is. Root-Bernstein found that scientists versed in the arts possess a distinct advantage in making discoveries. So equipped, they are able to see from other sides, play, make connections, and look at problems in expansive ways. To prepare good thinkers, we need to cultivate good seers.”

Here’s how Sousanis wrote/drew it: 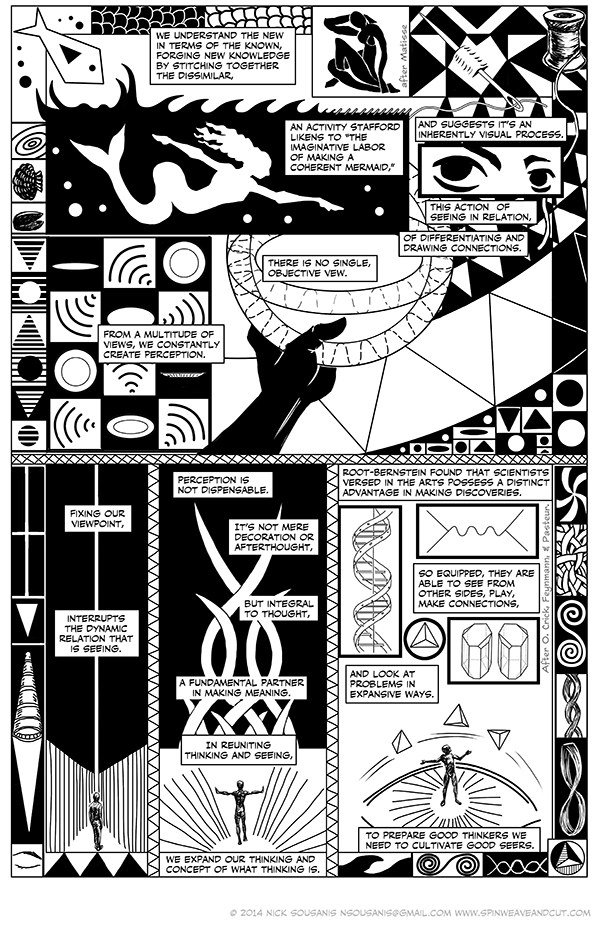 The Notes section of “Unflattening” offers citations (e.g., Stafford and Root-Bernstein mentioned in the quote above) as well as Sousanis’ brief notes on the origins and inspirations of his ideas and images. The pages themselves refer to visual elements introduced previously in the book: the image of a plate as a circle and oval that accompanies “There is no single, objective view” on page 81, illustrated above, refers to a previous page that demonstrates how we know that a plate is round even though it appears elliptical when viewed from the side because we actively apply previously-learned schemas to organize our visual perception. The person inside a corridor depicted with “Fixing our viewpoint interrupts the dynamic relation that is seeing” also refers to previous pages in which people were depicted inside corridors. The person juggling tetrahedra that accompanies “To prepare good thinkers we need to cultivate good seers” refers to previous pages that demonstrate how we construct three-dimensional mental models of objects by looking at them from different angles.

The title of the book refers to the visual learning process Sousanis advocates as a liberation from one-dimensional thinking, using Abbot’s geometric parable “Flatland” as a metaphor for the kind of uniformity of thought and perception that is so often imposed by school and society. In “Flatland,” a two-dimensional being, “A. Square,” visits “lineland,” whose inhabitants don’t understand upward and downward because they only know forward and backward. Similarly, when a three-dimensional passes through a plane in A. Square’s world, it appears as a point that expands to a circle and contracts back to a point before it disappears from the plane. Sousanis, himself an educator, likens this to the way strictly text-based learning — and other pressures from schooling and culture – diminishes people’s ability to perceive and conceive outside their “flattened” perspective.

Soon to take a position at San Francisco State University, Sousanis presently teaches at University of Calgary where he offers a course on “Comics as Thinking”: “This course will explore comics as a unique and robust communication form, with an emphasis on understanding comics by making them. We will take a multifaceted approach to analyzing the medium, from uncovering comics’ historical roots and examining the various genres developed in the West and across the globe, to delving into the theoretical and formal elements, as well as considerations of comics in relation to other media such as film, poetry, and even architecture. Beyond narratives, we will look at the growing role comics are playing in the fields of journalism, education, and health/medicine. While making comics will be a significant component of the course, prior drawing experience is not required. Rather, we will expand upon what drawing means by creating spaces for students to play and explore the multiplicity of possibilities that emerge when we work in the bilingual fashion that comics facilitate. The course will serve as a springboard for students to develop ways to incorporate visual practices gleaned from comics into their own creative and critical work.”