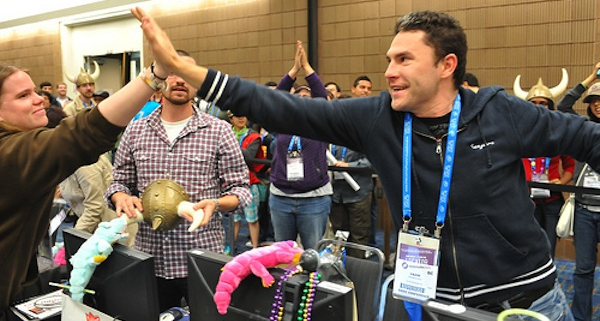 This year’s convention of the Association for Computing Machinery’s Special Interest Group on Graphics and Interactive Techniques (SIGGRAPH) attracted more than 20,000 programmers, artists, researchers, filmmakers, and gaming professionals – as well as students and academics from almost 80 countries.  Apparently SIGGRAPH is also promising to transform contemporary education.

Most came to SIGGRAPH to see the newest products in computer graphics and interactive technologies, which were hawked by the 160 exhibitors vying for the audience’s attention on the 46,000-square-foot floor of the Los Angeles Convention Center.  It was a prime location, close to many Los Angeles area universities and entertainment mega-companies.  Spectators strolled around the giant displays showcasing the latest in motion-capture suits or 3-D printers or interactive visualization screens.

Not all were captivated by the gizmos on exhibit.  Some ventured into the art gallery to see works that questioned consumerism, commodity culture, and group thinking.  For example, Joseph Farbrook’s Strata-Caster used a wheelchair as the interface that gives users access to its celestial virtual world.  Others took part in hands-on workshops for do-it-yourself hobbyists.  Game designer, University of Southern California Professor, and creator of a game about how to get into college, Tracy Fullerton, talked about her path from earning merit badges to leveling up in videogames in a room full of enthusiastic girl scouts.

Of course, SIGGRAPH is also an academic conference with papers and panels at which university professors and their graduate students share peer-reviewed findings to improve computer software and hardware.  The information-sharing at SIGGRAPH can be tricky, because the most important research done at a university will often turn into patented proprietary and often highly profitable corporate technologies.  And corporations that capitalize on new kinds of computer use are trying to extend their influence in university departments or turning their research labs into actual pseudo-departments with many of the trappings of academia.  For example, Disney Research, a prominent player at this year’s SIGGRAPH, claims to be “offering the best attributes of academia and industry.”

The SIGGRAPH panels on “Grand Challenges in Education” mostly featured university professors and representatives from government agencies like the National Endowment for the Humanities and the National Science Foundation.  But the first panel of assembled experts also included Glenn Entis, who once served as the “Chief Visual Officer” of one of the dominant global computer game companies, Electronic Arts.  Entis talked about how the pre-production cycle of videogame development could serve as a model for higher education and urged academics to work in interdisciplinary teams that recognize how “social habits affect decision space.”

UCLA professor Rebecca Allen also acknowledged the potential value of borrowing ideas from the business insights of high-tech companies.  As Director of the Nokia Research Center in Hollywood, Allen argued that as universities experiment with ways to be more virtual they often ignore the fact that more everyday practices of virtuality in daily life also offer opportunities for learning more about the real world.  Specifically, Allen claimed that mobile devices like smart phones can facilitate “connection to the physical world and our bodies” that could truly transform education.

Much of the SIGGRAPH “Grand Challenges” discussion focused on the familiar question of how to rethink the organization of academia into separate “silos” of knowledge in which research faculty from different professional disciplines talk, share ideas or work together.

The tone was set by David Theo Goldberg of the University of California’s Humanities Research Institute.  (UCHRI is the home of the Digital Media and Learning Research Hub and DMLcentral.net).  Goldberg asserted that in a technologically driven society, the humanities had an even more critical role to play in processing meaning and value and teaching new ways to think about translation and adaptation as platforms, interfaces, media, and codes multiply.  Goldberg pointed out the deep irony that humanities professors were often left out of their logical leadership role by their own choices and cultural inclinations as they avoided “new modes of organizing around networking” and continued to lionize solo scholarship and print monographs that are read by fewer and fewer people.

Despite her physical absence, Victoria Vesna was an important part of the panel presentation.  Many noted how her work with high school students and international students to connect nanotechnology, biotechnology, and art could serve as a model for participatory distributed knowledge-sharing practices across borders and age cohorts.

The “Grand Challenges” panel was co-sponsored by Leonardo, the International Society for the Arts, Sciences, and Technology, which is known for organizing arts initiatives around subjects like climate change or nanotechnology.  (Later in the day, Leonardo also sponsored a more free-for-all session with the Leonardo Education and Art Forum or LEAF).

Although there was considerable pessimism expressed by many panelists, particularly by those who were veterans of e-learning efforts that dated back to the Dynabook, there was also great enthusiasm for protecting and preserving practices of deep scholarship traditionally associated with the humanities.  As one audience member put it, the grand challenge in education wasn’t just about demolishing silos; it was about turning silos into wells that can sustain a rapidly changing culture.