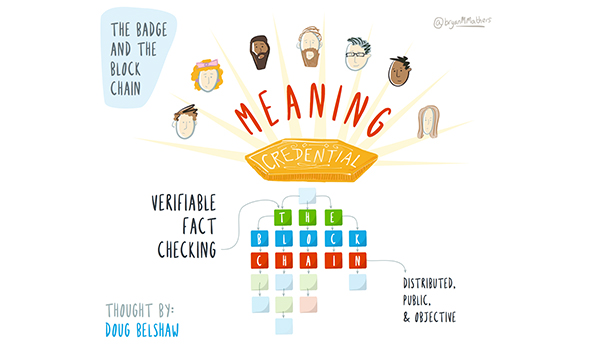 I recently attended Nesta’s FutureFest event in London. It was a heady mix of everything related to what’s next: from food to technology to economics to politics. What really caught my attention, however, was the way in which one particular innovation seemed to have captured the imagination of people across various sectors. That technology is the blockchain.

Bear with me. Some of this will have to be slightly technical in order to get across the point I want to make about credentialing. First, I’ll explain in broad brushstrokes how the blockchain is currently used to underpin Bitcoin, the ‘cryptocurrency’ you’ve no doubt heard something about. After that, I’ll investigate ways in which it could be used with web-native systems such as Open Badges to profoundly transform the way we think about trusted credentials.

When people talk about “the blockchain,” they’re almost always referring to the technology underpinning Bitcoin. The blockchain is literally a chain of blocks of code serving as a “public ledger” to record transactions within a distributed database. Everyone involved in Bitcoin transactions has a complete copy of the blockchain. This is important as it prevents double spending without the need for central oversight.

At the moment, most things being placed into the blockchain are hashes (i.e. obfuscated representations) of currency transactions. In other words, you can prove that something took place at that point in time. Those not involved in the “transaction” would not be able to see what actually took place — unless you provided them with the key.

Anything that can be “hashed” can be placed into the blockchain. Many suggestions have been made for the kinds of information that could be placed into it. In essence, anything that usually requires central oversight could, in theory, be replaced by using the blockchain. Examples include extremely sensitive information such as voting patterns, HR records, and, even, nuclear launch codes.

One of the potential stumbling blocks when it comes to the Open Badges Infrastructure (OBI) can be verification. How do I make absolutely sure that the person with this badge is the same person who created the evidence claiming it? I’ve told the story many times of my great-uncle who based his entire career on the “fact” that he attended Oxford University. He claimed his degree certificate was destroyed in a fire when, in fact, he’d simply doctored an old photo of the year he would have been at the university.

If we used the blockchain for Open Badges, then we could prove beyond reasonable doubt that the person receiving badge Y is the same person who created evidence X. This would use a “proof of work” system. At the moment, the situation is still better than paper-based certificates but, such an approach would allow Open Badges to be used in extremely high-stakes situations. The blockchain would prove a connection between the evidence and the badge. More details could be unlocked if the earner chooses to share his or her key.

Blockchain technology underpins Bitcoin and is the original and best-known example. However, there’s no reason why there can’t be multiple blockchains that aren’t so tied to cryptocurrencies. One soon-to-launch example of this is Ethereum which describes itself as “a platform for decentralized applications.”

Ethereum allows for a situation in the not-so-distant future where smart contracts will allowentirely autonomous corporations to exist. Those who have seen the Terminator series of films may have concerns about the potential for Skynet in all of this. The reality, while exciting, is likely to be much more prosaic (and much less dystopian) than those works of science fiction suggest. With terms of service instantiated in code, such organisations will work on behalf of us to perform tasks that cause problems when subject to human error. These could include automatic issuing and verifying services around trusted credentials.

While we wouldn’t want to entirely remove the “human” element around credentialing, a hybrid OBI and blockchain approach could add value to our current system. Machines and software are extremely good at fact-checking, whereas humans are good at meaning. We need both.

If my evidence to earn a badge (or whatever we end up calling such credentials) is part of the blockchain, then I have data upon which to draw that is distributed, public, and objective. Compare that with our current ad-hoc system of certificates languishing in drawers that struggle to be represented online. Verification moves beyond questions such as “does this look legitimate?”to verified, trusted credentials.

It’s worth saying that all of this talk of using the blockchain with the OBI is highly speculative. There have been some initial conversations and a group at Dartmouth College is investigating possibilities as the Open Badge Exchange. If you have an interest, now is the perfect time to start thinking about these things and getting involved!